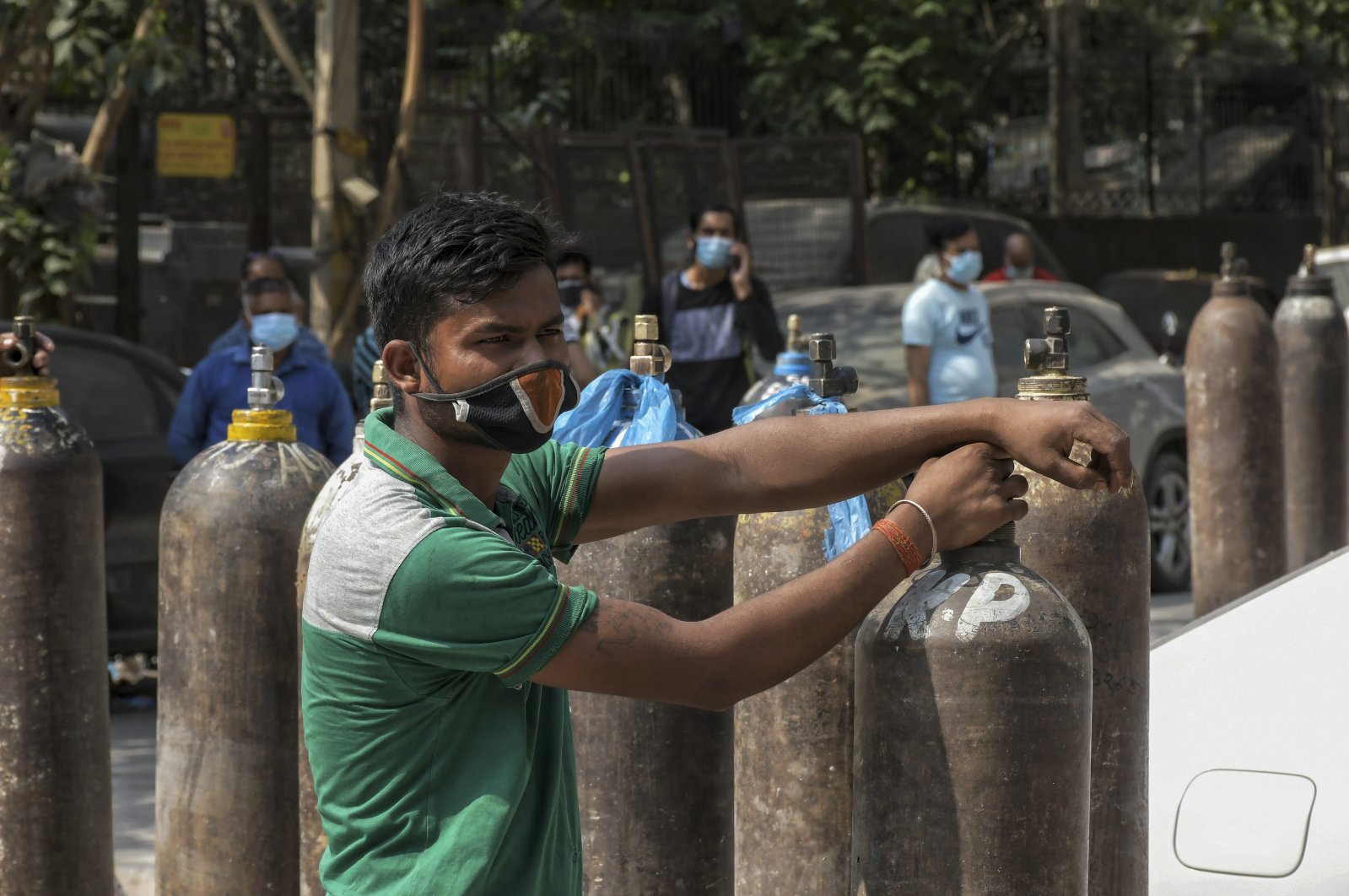 India continues to struggle against the impact of a devastating COVID-19 surge, while leaders of opposition parties urge the government to launch a free vaccination drive and ensure an uninterrupted flow of oxygen to all hospitals

India's cumulative coronavirus case count neared 20 million Monday as hospitals continued to send distress messages for emergency oxygen supplies and a top jab-maker said the country may face a vaccine crunch for the next two to three months.

The last 24 hours brought 368,147 fresh infections, propelling the number of people who have suffered an infection so far to 19.93 million, government data showed. India, in the grip of a second wave, has logged more than 300,000 cases every day for more than 10 days.

The overall death toll hit 218,959, with 3,417 new deaths reported. That means India has moved past Mexico to rank third, after the United States and Brazil, in terms of COVID-19 fatalities.

However, experts have said the numbers may be an underestimate due to low testing rates and the number of people dying at home, particularly in rural areas.

The shortage of medical oxygen also worsened. Twenty-eight patients died overnight, allegedly for want of the life-saving gas in hospitals in the states of Karnataka and Madhya Pradesh, broadcaster NDTV reported.

Officials did not confirm deaths due to oxygen shortages but ordered a probe into the matter. The Supreme Court has ordered the federal government to make up for the deficit of oxygen in New Delhi, the worst-affected of the country's cities, by midnight Monday (7:30 p.m. GMT Monday).

The crisis began some two weeks ago but has shown no signs of improving, despite assurances by authorities.

In a fresh setback to the country's vaccination drive, Serum Institute of India's (SII) Adar Poonawalla told the Financial Times in an interview that the company would be able to increase its capacity to 100 million doses by July, from the current 60 million-70 million a month.

Many in India had hoped for more doses, and sooner than July.

India is majorly dependent on supplies of the Oxford-AstraZeneca vaccine, manufactured by SII, the world's largest jab-maker, which distributes it locally under the brand name Covishield.

India Saturday widened its faltering vaccination drive to include anyone aged 18 or older. But many states have delayed the program, citing shortages.

Daily vaccinations have fallen from early April, but the federal government maintains that 7.5 million doses are still available with states.

Only 10% of Indians have received one dose and less than 2% have been fully vaccinated in the drive, which began in January.

Meanwhile, leaders of 13 opposition parties urged the government to launch a free vaccination drive and to ensure an uninterrupted flow of oxygen to all hospitals. Several hospital authorities over the weekend sought a court intervention over oxygen supplies in New Delhi, where a lockdown has been extended by a week in an attempt to contain the wave of infections.

“Water has gone above the head. Enough is enough,” said the New Delhi High Court, adding it would start punishing government officials if supplies of oxygen allocated to hospitals are not delivered.

Prime Minister Narendra Modi’s government has been severely criticized over its handling of the surge, which has pushed India’s already fragile and underfunded health system to the brink of collapse. Massive election rallies organized by his Bharatiya Janata Party (BJP) and other parties, as well as a giant Hindu festival on the banks of the Ganges, may have exacerbated the spread, experts said, adding that new variants could also be increasing cases.

Meanwhile, the world's biggest cricket tournament, the Indian Premier League, said Monday's match between the Royal Challengers Bangalore and Kolkata Knight Riders would be rescheduled after two players tested positive for the coronavirus. The two players have self-isolated and medical personnel were tracing their contacts.

Despite rising cases, the league has held matches every evening behind closed doors since it kicked off in April.