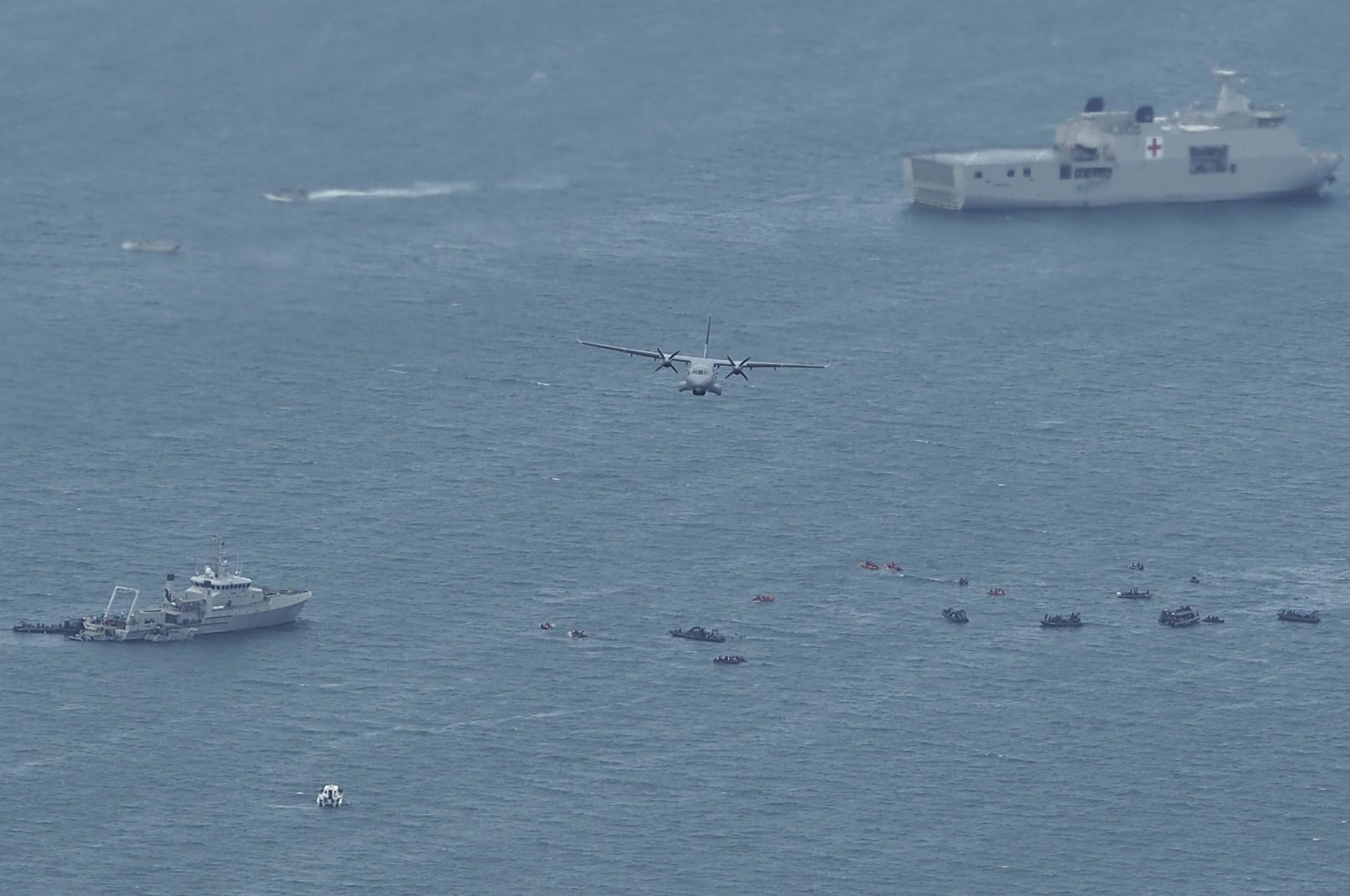 Indonesian Navy's aircraft flies by as the search for the wreckage of a crashed Sriwijaya Air passenger jet continues, in this aerial photo taken over the Java Sea, off Jakarta, Indonesia, Jan. 12, 2021. (AP Photo)
by ASSOCIATED PRESS Jan 12, 2021 2:06 pm
RECOMMENDED

Indonesian Navy divers searching the ocean floor on Tuesday recovered a "black box” from a Sriwijaya Air jet that crashed into the Java Sea over the weekend with 62 people on board.

It wasn't immediately clear whether the device was the plane’s flight data or cockpit voice recorder.

The recovery is expected to help investigators determine what caused the Boeing 737-500 plane to nosedive into the ocean in heavy rain shortly after takeoff from Jakarta on Saturday.

TV stations showed divers on an inflatable vessel with a large white container containing the device heading to a Jakarta port. It is to be handed over to the National Transportation Safety Committee (NTSC), which is overseeing the crash investigation.

A navy ship earlier picked up intense pings being emitted from the two recorders.

They were buried in seabed mud under tons of sharp objects in the wreckage, navy Chief Adm. Yudo Margono said. He said at least 160 divers were deployed Tuesday in the search for the devices.

More than 3,600 rescue personnel, 13 helicopters, 54 large ships and 20 small boats are searching the area just north of Jakarta where Flight 182 crashed and have found parts of the plane and human remains in the water at a depth of 23 meters (75 feet).

So far, the searchers have sent 74 body bags containing human remains to police identification experts who on Monday said they had identified their first victim, 29-year-old flight attendant Okky Bisma. His wife, Aldha Refa, who is also a flight attendant for Sriwijaya Air, shared her grief in a series of posts on social media.

"My husband is a loving, devout and super kind man,” she wrote on Instagram. "Heaven is your place, dear... be peaceful there.” Anguished family members have been providing samples for DNA tests, and police say results are expected in four to eight days.

The NTSC chairman, Soerjanto Tjahjono, ruled out a possible midair breakup after seeing the condition of the wreckage found by searchers. He said the jet was intact until it struck the water, concentrating the debris field, rather than spreading it out over a large area as would be seen with a midair event. The disaster has reignited concerns about safety in Indonesia’s aviation industry, which grew fast after the economy was opened following the fall of dictator Suharto in the late 1990s.

The United States had banned Indonesian carriers from operating in the country in 2007, lifting the action in 2016, citing improvements in compliance with international aviation standards. The European Union lifted a similar ban in 2018. In the past year, Indonesian aviation was affected significantly by the coronavirus pandemic that caused travel restrictions and a slump in demand among travelers.

Sriwijaya Air has had only minor safety incidents in the past, though a farmer was killed in 2008 when a plane went off the runway while landing due to a hydraulic issue. In 2018, a Boeing 737 MAX 8 jet operated by Lion Air crashed, killing 189 people. An automated flight-control system played a role in that crash, but the Sriwijaya Air jet did not have that system on board.