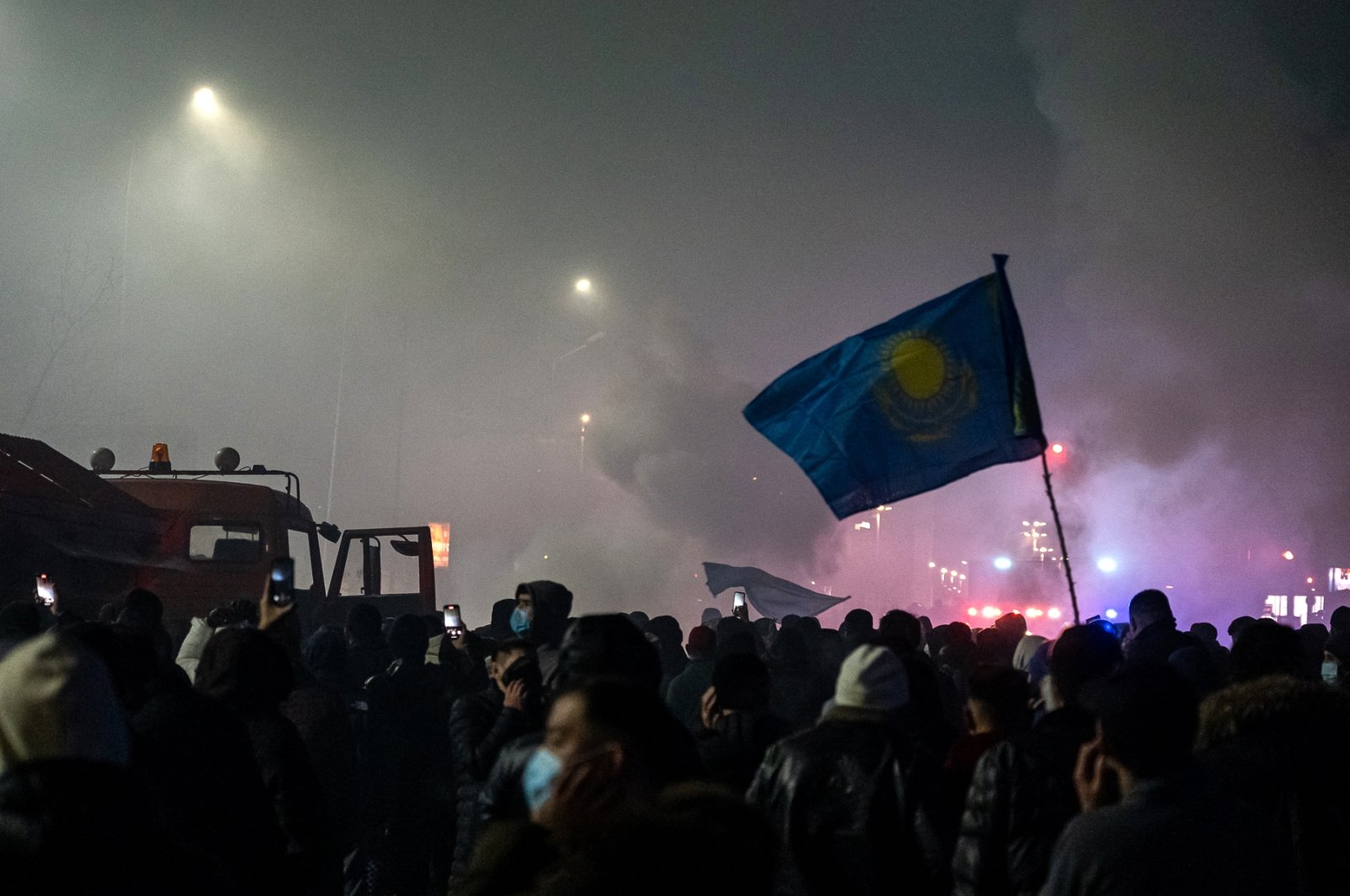 Kazakhstan's president sacked the Central Asian country's cabinet Wednesday in a bid to head off unprecedented unrest across the nation that followed an energy price hike.

More than 200 people were detained during protests that swept across Kazakhstan following a new year increase in prices for liquid petroleum gas (LPG), which is widely used to fuel cars in the west of the country.

Thousands took to the streets in the largest city Almaty and in the western province of Mangystau, saying the price rise was unfair given oil and gas exporter Kazakhstan's vast energy reserves.

Clashes erupted in Almaty, with police firing stun grenades and tear gas into a crowd of more than 5,000 people that marched through central streets shouting anti-government slogans and sometimes attacking vehicles.

President Kassym-Jomart Tokayev moved with speed after the unrest, accepting the resignation of the cabinet headed by Prime Minister Askar Mamin. He also imposed states of emergency in Almaty, the financial capital, and Mangystau province from Jan. 5 until Jan. 19.

An overnight curfew will be in place in both territories from 11 p.m. to 7 a.m., with restrictions on movement in and out of the areas. Protesters in Almaty had dispersed overnight and the streets were also quiet in the capital Nur-Sultan.

Speaking to acting cabinet members, Tokayev ordered them and provincial governors to reinstate LPG price controls and broaden them to gasoline, diesel and other "socially important" consumer goods. He also ordered the government to develop a personal bankruptcy law and consider freezing utilities' prices and subsidising rent payments for poor families.

He said the situation was improving in protest-hit cities and towns after the state of emergency was declared which included both a curfew and movement restrictions.

Tokayev had called for a return to calm in a video posted on Facebook.

"The government will not be felled, but we don't need conflict," Tokayev said in the address. The protesters in Almaty yelled "old man out" – a reference to Tokayev's still-powerful predecessor and mentor Nursultan Nazarbayev – and "government resign" before police moved in, sparking battles with demonstrators.

Tokayev took office in 2019, handpicked as a successor by Nazarbayev, a close ally of Russian President Vladimir Putin.

One of five ex-Soviet nations in Central Asia, Kazakhstan is of crucial importance to Russia as an economic partner and home to a large ethnic Russian population.

Spontaneous, unsanctioned protests are illegal despite a 2020 law that passed easing some restrictions of freedom of assembly.

Limits appeared to have been imposed on the internet on Wednesday, with messenger apps Telegram, Signal and WhatsApp all unavailable. Two independent media websites that reported on the protests also appeared to be blocked.

Smaller rallies had been staged in cities across the republic of 19 million people from Sunday, beginning with the town of Zhanaozen in Mangystau.

The initial cause of the unrest was a spike in prices for LPG in hydrocarbon-rich Mangystau, but a government move to lower the prices in line with protesters' demands failed to calm them.

Reports by independent media suggested that Tokayev's announcement of a new price of 50 tenge (11 U.S. cents) per liter, down from 120 at the beginning of the year, failed to weaken the rallies in Zhanaozen and Mangystau's capital Aktau as demonstrators aired new demands.

Footage from Aktau shared on social media Tuesday showed thousands of protesters – who had camped in the city center overnight – encircled by police. Most had dispersed from the city centre by Wednesday, state broadcaster Khabar reported.

In 2011, at least 14 striking oil workers were killed in Zhanaozen as police crushed a protest over pay and working conditions, the deadliest unrest since the republic gained independence in 1991.

Nazarbayev, who is 81 and had ruled Kazakhstan since 1989, retains control over the country as chairman of the security council and "Leader of the Nation" – a constitutional role that affords him unique policymaking privileges as well as immunity from prosecution.