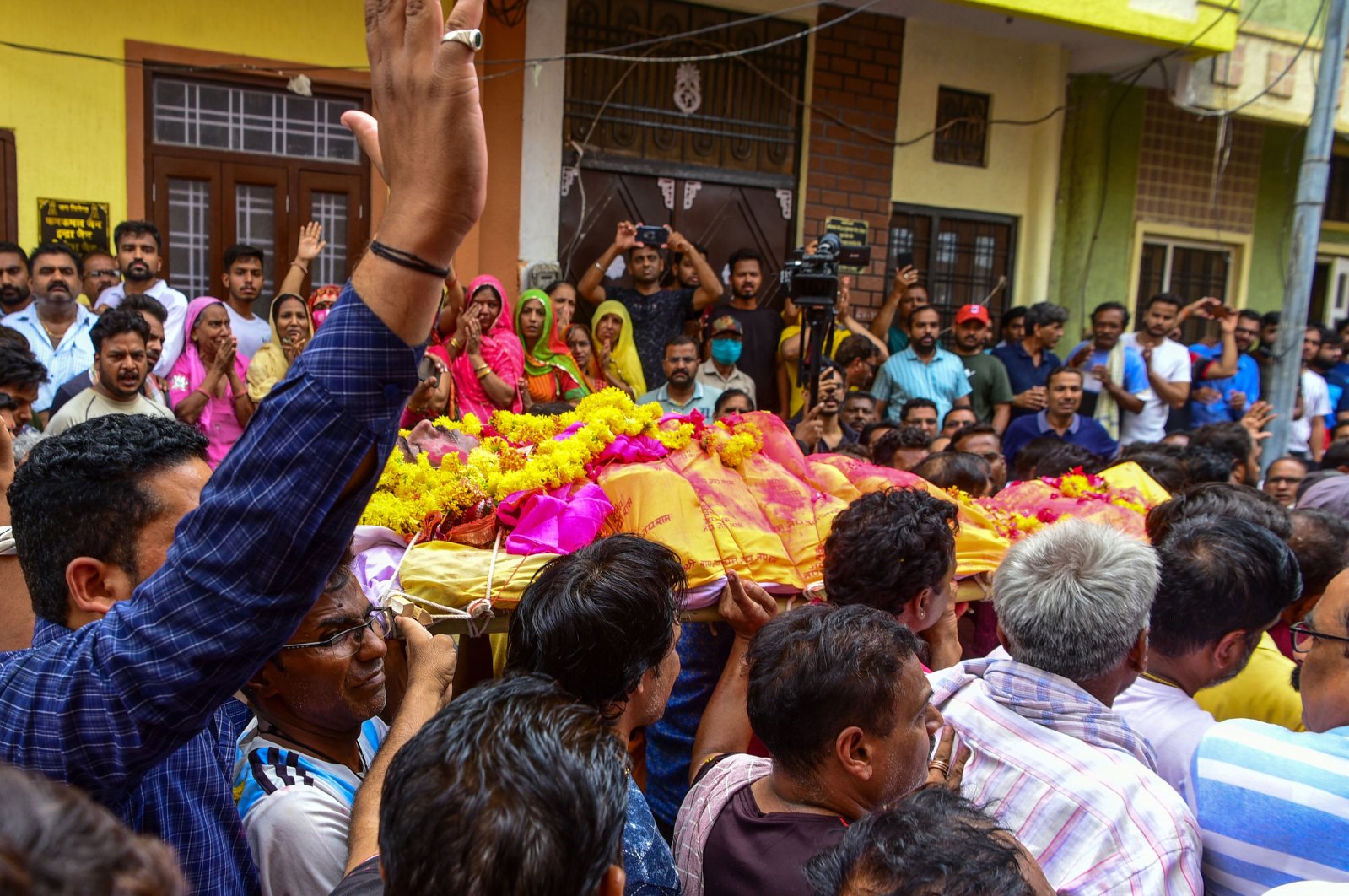 Fearing outbreaks of violence, police in the northwestern Indian state of Rajasthan banned public gatherings and suspended internet services a day after a video claiming responsibility for the killing of a Hindu tailor in the city of Udaipur was posted.

Two suspects were being interrogated by federal investigators on Wednesday, while state police were on guard against any unrest in the northwestern state.

"We are under strict orders to prevent any form of protests or demonstrations scheduled to condemn the murder," Hawa Singh Ghumaria, a senior police officer in Rajasthan, told Reuters, adding that the crime had sent "shockwaves through the country."

The video allegedly shows two men confessing to the killing while holding a meat cleaver. They also mention Nupur Sharma, a former spokeswoman for the ruling Hindu nationalist Bharatiya Janata Party (BJP), whose insults about the Prophet Muhammad earlier this month triggered domestic and international outrage and lead to her ousting.

Indian Home Minister Amit Shah said in a tweet that federal police had taken over the investigation into "the brutal murder" of Kanhaiya Lal Teli, giving the victim's full name.

"The involvement of any organization and international links will be thoroughly investigated," Shah said.

Late on Wednesday, a spokesperson from Pakistan's foreign ministry rejected reports appearing in some Indian media that linked the suspects to a Pakistan-based organization.

According to Bhawarlal Thoda, a city administrator in Udaipur, the tailor had been detained over a social media post in support of the BJP spokesperson that was traced to his mobile telephone, and that after being released Teli had told police on June 15 that he was being threatened.

"Terrorists executed my father in the most shocking way, the country must stand with our family to demand justice," the victim's son, Yash, told Reuters after his father's body was cremated on Wednesday.

He wants the culprits to be tried and sentenced to death, and denied that his father made any remarks that would be offensive to other religions.

"The incident has shocked followers of Islam, the heinous act committed by two men is absolutely un-Islamic," said Maulana Ahmed Siddiqui, a Muslim cleric based in Udaipur.

Authorities said they had suspended internet services in several parts of Rajasthan to prevent the circulation of the video.

"The mood is tense and almost all shops are closed today," Thoda said. The city of around half a million people is one of the major tourist draws in the desert state, and is known for its luxurious hotels, including the famous Taj Lake Palace.

In another video clip posted online, one of the assailants also went on to threaten Prime Minister Narendra Modi, saying "their blade would find him too."

Hardline Hindu groups held protests in the capital New Delhi to condemn the killing of Teli and some other protests were planned on Thursday.

India has a long history of religious violence, and thousands of people have been killed since the country became independent from British colonial rule in 1947.

Modi's pursuit of a "Hindu first" agenda since coming to power in 2014 has stoked tensions in a country where Muslims account for around 13% of its 1.4 billion people.

Earlier this month the BJP suspended Nupur Sharma from the party and expelled another official but the furor has not died down.

Modi has not commented on the incident in Udaipur. But, former Rajasthan Chief Minister Vasundhara Raje, who belongs to the BJP, blamed the Congress Party, now running the state, for the "communal frenzy and violence" that has arisen there.

Raje claimed, "such acts can occur because the state government provides tacit support to criminals."

While Congress has championed secular values in India since independence, the BJP has cast it as a pro-Muslim party in order to draw Hindus away from its main opposition.

Rajasthan, with a population of around 69 million people, is just one of two Indian states where Congress holds a majority in the state legislature and it is due to hold elections next year.