More than 92K new COVID-19 cases in India, set to surpass US 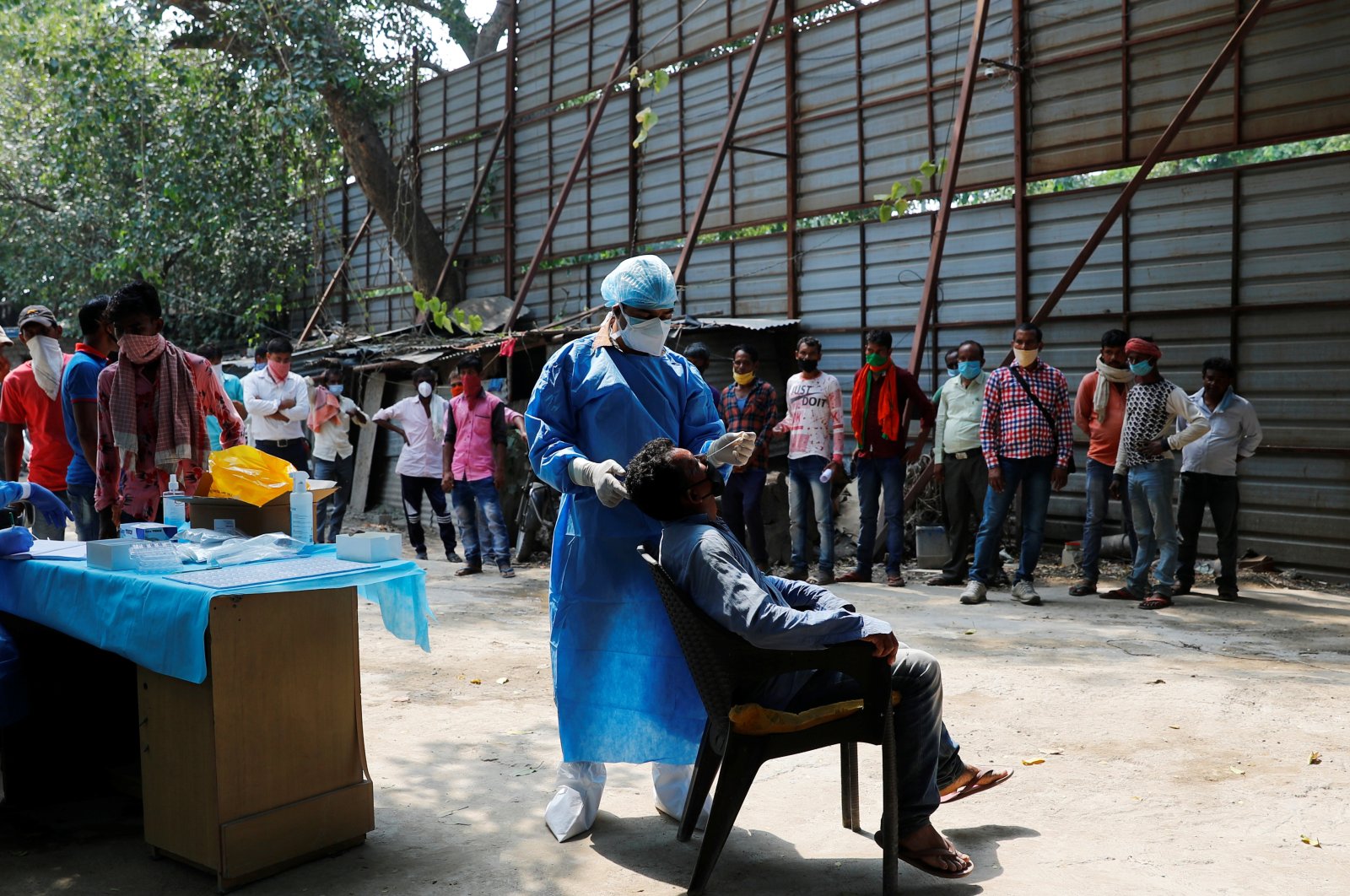 A health care worker wearing personal protective equipment (PPE) takes a swab from a migrant laborer for a rapid antigen test at the construction site for a residential complex amid a coronavirus outbreak in New Delhi, India, Sept. 19, 2020. (Reuters Photo)
by compiled from agencies Sep 20, 2020 2:17 pm

The number of new infections in India continues to skyrocket at an unprecedented rate, making it the world's second-worst hit by the pandemic and setting it up to surpass the U.S.' nearly 7 million cases

Coronavirus cases in India continue to surge at an alarming rate as 92,605 new infections were reported in the last 24 hours, the country's health ministry’s tally showed Sunday. The resurge of new cases has also led other countries to tighten restrictions.

The country’s COVID-19 cases have now crossed 5.4 million. According to the latest data, 1,133 new deaths were reported in the last 24 hours, taking the total death count to 86,752.

The ministry tweeted on Sunday that the country has scaled another peak in testing as 1.2 million tests were conducted in the past 24 hours.

"#IndiaFightsCorona India has scaled yet another peak! More than 12 lakh samples tested in the past 24 hours. Cumulative tests in the country have crossed the landmark figure of 6 crore (60 million),” the ministry tweeted.

The Times of India reported that dozens of parliamentarians were found to be COVID-19 positive as parliament sessions began amid the massive spike in cases this week. The situation led to an agreement between the government and the opposition to curtail the scheduled session after passing important bills.

For the past several days, India has witnessed a daily increase of around 90,000 cases. This week, the country’s coronavirus cases crossed the 5 million mark. Experts say that India is likely to surpass the U.S. – the worst-affected country in the world – in the severity of the pandemic due to lack of health care facilities. India, however, also has the highest number of recovered patients in the world, according to Johns Hopkins University. Its recovery rate stands at about 80%. Over 60% of the active cases are concentrated in five of India's 28 states – Maharashtra, Karnataka, Andhra Pradesh, Tamil Nadu and Uttar Pradesh. Prime Minister Narendra Modi’s government has faced scathing criticism for its handling of the pandemic amid a contracting economy that left millions jobless.

The decision to curtail the current 14-day session of parliament was taken at a meeting of representatives of the government and political parties in parliament on Saturday, a parliamentary secretariat official said. The short session of parliament from Sept. 14 to Oct. 1 had been called to enable the passing of crucial legislation. At least 25 lawmakers were found to be positive for the coronavirus during mandatory testing before the opening of the session and were quarantined, NDTV news channel reported.

But three more lawmakers, including two ministers, who had been attending parliament, have tested positive in the past week. The last date of the session, which could be as early as Wednesday, will be announced after a meeting of the Cabinet committee on parliamentary affairs.

The country with the highest number of deaths compared to its population is Peru with 95 fatalities per 100,000 inhabitants, followed by Belgium with 86, Spain with 65, Bolivia with 65 and Brazil with 64.

Britain’s government will fine people who refuse an order to self-isolate up to 10,000 pounds ($13,000) as the country sees a sharp surge in coronavirus infections. The new rule obliges people to self-isolate if they test positive for the coronavirus or are traced as having had close contact. The rule comes into effect on Sept. 28.

The government will help those on lower incomes who face a loss of earnings as a result of self-isolating with a one-time support payment of 500 pounds. The latest figures show that new daily coronavirus cases for Britain have risen to 4,422, the highest since early May. An official estimate also shows that new infections and hospital admissions are doubling every seven to eight days in the U.K.

The Conservative government is widely expected to impose further restrictions after Prime Minister Boris Johnson confirmed that Britain is seeing a second wave of infections, following the trend elsewhere in Europe. London's mayor has also said tighter restrictions could be needed soon in the British capital.

Figures up in France

The number of new infections tipped the scales again in France on Saturday with nearly 13,500 new infections in 24 hours. Economy Minister Bruno Le Maire is among them.

He announced Friday in a tweet that he had tested positive with no symptoms and was working during self-isolation. The high-profile Le Maire is the fourth French minister to test positive since March.

It was the second day in a row that new COVID-19 cases in France were above 13,000. The French health agency said Friday’s big jump was the result of one hospital in the Essonne region south of Paris belatedly reporting numerous cases. It wasn’t clear whether that kind of add-on effect was at play on Saturday.

For health authorities, it is clear that France needs to worry about the spread of the coronavirus, with over 1,000 clusters detected. There have been 31,274 deaths since the start of the pandemic – among the highest death tolls in Europe – and 26 deaths in the last 24 hours.

In Paris, the Prefecture de Police warned in a tweet that there will be no more tolerance for bars and restaurants where rules to counter the virus are not respected, like standing at counters or failing to respect social distancing. Police "are intensifying” checks that can lead to closing establishments, it said. In one Paris district, 13 establishments were formally notified that they are at risk of being shut down and 16 others were fined, the prefecture tweeted.

The Italian health ministry reported another 1,638 new cases of coronavirus and 24 deaths. The deaths brought Italy’s official coronavirus toll to 35,692, the second highest in Europe after Britain.

The health ministry says the new cases were based on a record 103,223 tests. While countries such as Germany have been processing more than double that number in recent days, Italy has been limited at around 100,000 tests.

Public health officials said in their weekly monitoring report that Italy’s seven-week uptick in cases represented a "slow and progressive worsening of the outbreak.” However, it’s not as bad as in other European countries where new daily cases have exceeded 10,000.

Dozens of Israelis held a beach demonstration against a new lockdown prompted by a surge in coronavirus cases. The protesters Saturday relied on a loophole in the national closure’s guidelines that allows people to travel beyond the 1-square-kilometer limit if they are to participate in a demonstration. The three-week nationwide lockdown began Friday as Israel celebrates Rosh Hashana, the Jewish new year.

Some protesters carried pictures of Israeli Prime Minister Benjamin Netanyahu, who has been the target of weekly protests throughout the summer for his corruption charges and failure to handle the pandemic.

Israel largely contained the virus in the spring, but the abrupt reopening of the economy in May worsened the outbreak. The protests against Netanyahu also were fueled by business owners who say the government failed to offer proper compensation in the first lockdown.

The government decided to impose a second lockdown because health authorities are recording thousands of cases a day, with a confirmed death toll of about 1,200.