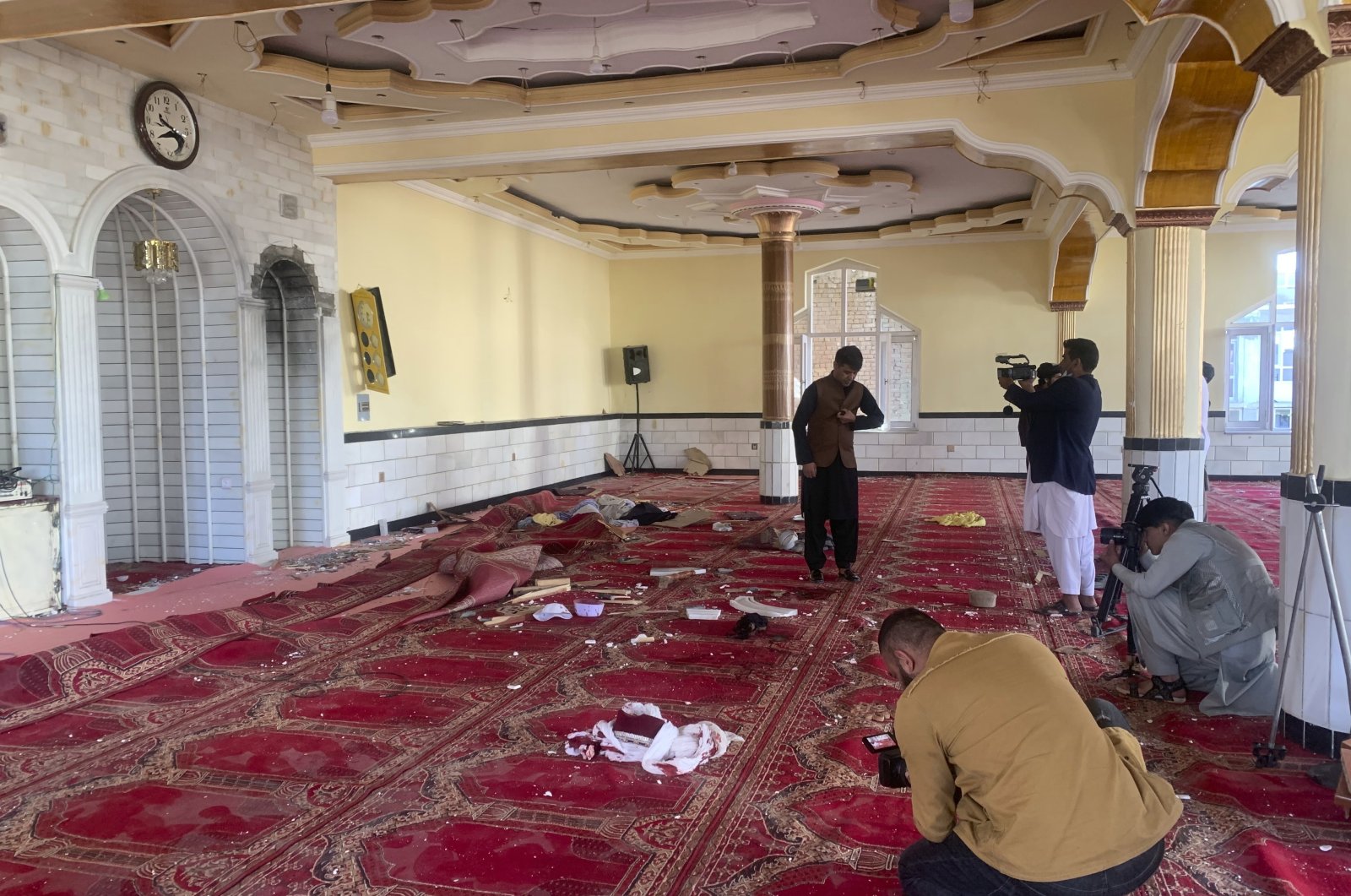 Afghan journalist take photos and film inside a mosque after a bomb explosion in Shakar Dara district of Kabul, Afghanistan, Friday, May 14, 2021. (AP Photo)
by ASSOCIATED PRESS May 14, 2021 1:45 pm
RECOMMENDED

At least 12 people were killed and more than a dozen were injured in a bomb attack targeting a mosque in Afghan capital Kabul during Friday prayers on the second day of Ramadan Bayram, also known as Eid al-Fitr.

Spokesman Ferdaws Faramarz said the mosque imam, Mofti Naiman, was among the dead, adding that another 15 people were wounded.

The bomb exploded as prayers had begun. No one claimed responsibility for the bombing, but initial police investigations suggest the Imam may have been the target, Faramarz said.

Faramarz said explosives had been placed inside the mosque beforehand. An image circulating on social media showed three bodies lying on the floor of the mosque, which showed minor damage.

Taliban spokesman Zabihullah Mujahid denied any connection to the mosque attack, condemning it and accusing Afghanistan’s intelligence agency of being behind the explosion. Both the Taliban and government routinely blame each other for attacks. Seldom are the culprits ever identified, and the public is rarely informed of the results of investigations into the many attacks in the capital.

A worshipper at the mosque, Muhibullah Sahebzada, said he had just stepped into the building when the explosion went off. Stunned, he heard the sound of screams, including those of children, as smoke filled the mosque. Sahebzada said he saw several bodies on the floor, and at least one child was among the wounded. It appeared the explosive device had been hidden inside the pulpit at the front of the mosque, he added.

"I was afraid of a second explosion so I came immediately to my home” he said.

The explosion comes on the second day of a three-day ceasefire announced by the warring Taliban and Afghan government. The pause was for the Islamic festival Eid-al-Fitr, which follows the fasting month of Ramadan.

Until now many of the attacks in the capital have been claimed by the local affiliate of Daesh terrorist group, but both the Taliban and government blame each other.

The most recent attack last week killed over 90 people, many of them pupils leaving a girls’ school when a powerful car bomb exploded. The Taliban denied involvement and condemned the attack.

The relentless violence comes as the U.S. and allied NATO forces continue with their final withdrawal from Afghanistan after nearly 20 years of war. Just this week the last of the U.S. troops left southern Kandahar Air Base, while some NATO troops still remained. At the war's peak more than 30,000 U.S. troops were stationed in Kandahar, the Taliban heartland. Kandahar was the second largest U.S. base in Afghanistan after Bagram north of the Afghan capital.