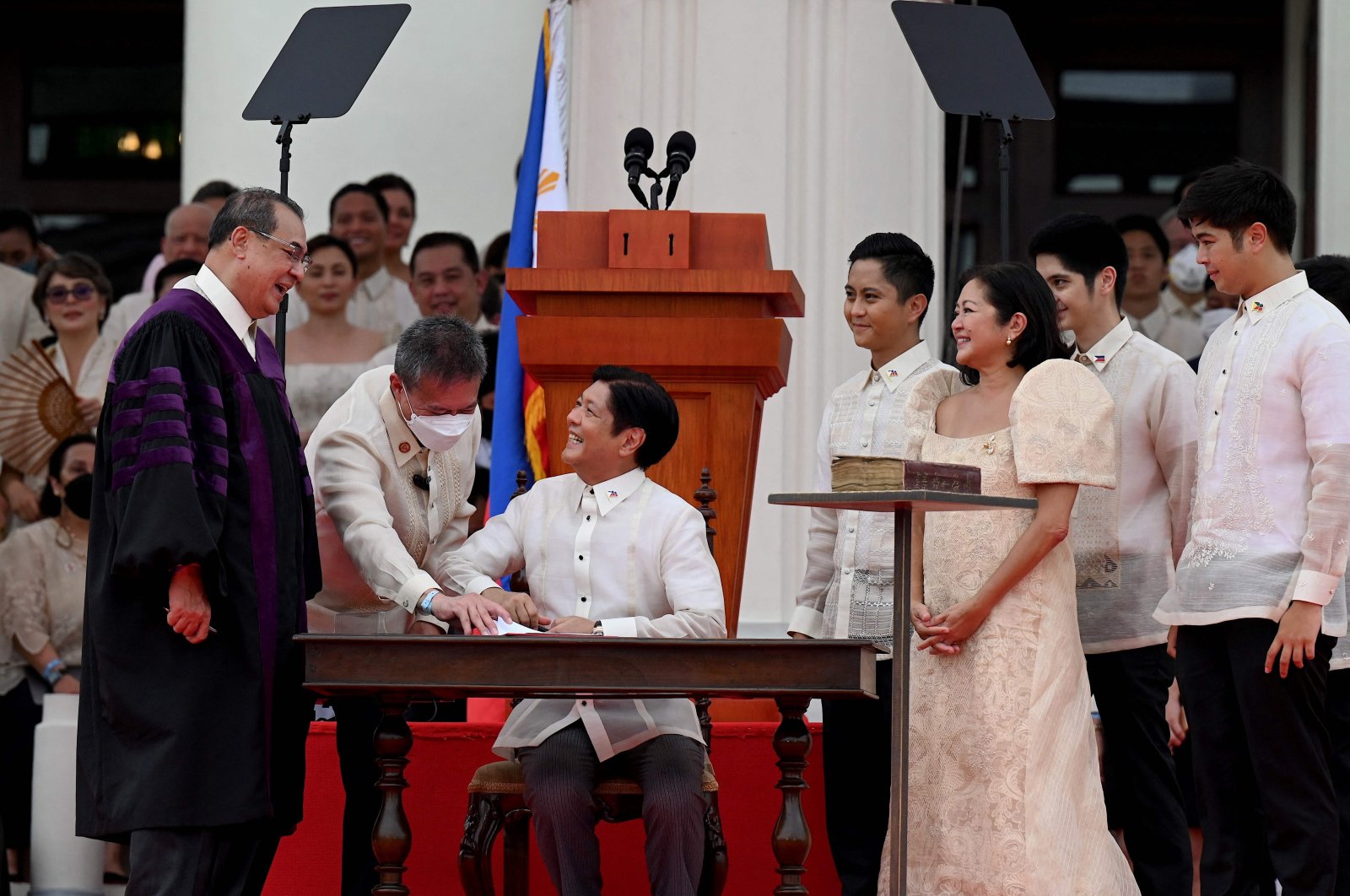 Ferdinand Marcos Jr., the namesake son of a former dictator, was sworn in as the 17th president of the Philippines on Thursday in one of the greatest political comebacks in recent history that opponents say was pulled off by whitewashing his family’s image.

His rise to power, 36 years after an army-backed "People Power” revolt booted his father from office and into global infamy, upends politics in the Asian democracy, where a public holiday, monuments and the Philippine Constitution stand as reminders of the end of Ferdinand Marcos Sr.’s tyrannical rule.

But in his inaugural speech, Marcos Jr. defended the legacy of his late father, who he said accomplished many things that were not done since the country’s independence, adding he would emulate him.

"He got it done, sometimes with the needed support, sometimes without. So will it be with his son,” he said to applause from his supporters in the crowd. "You will get no excuses from me.”

"My father built more and better roads, produced more rice than all administrations before his,” Marcos Jr. said, and also praised the infrastructure projects by his equally controversial predecessor, Rodrigo Duterte.

He called for unity, saying "we will go further together than against each other, pushing forward not pulling each other.” He did not touch on the human rights atrocities and plunder his father was accused of, saying he would not talk about the past but the future.

Activists and survivors of the martial law era under his father protested Marcos Jr.’s inauguration, which took place at a noontime ceremony at the steps of the National Museum in Manila. Thousands of police officers, including anti-riot contingents, SWAT commandos and snipers, were deployed in the bayside tourist district for security.

Such historical baggage and antagonism stand to hound Marcos Jr. during a six-year presidency beginning at a time of intense crises.

The Philippines has been among the countries worst hit in Asia by the two-year coronavirus pandemic, after more than 60,000 deaths and extended lockdowns sent the economy to its worst recession since World War II and worsened poverty, unemployment and hunger. As the pandemic was easing early this year, Russia’s invasion of Ukraine sent global inflation soaring and sparked fears of food shortages.

Last week, Marcos Jr. announced he would serve as secretary of agriculture temporarily after he takes office to prepare for possible food supply emergencies. "I think the problem is severe enough,” he said, and added he had asked his key advisers to brace for "emergency situations, especially when it comes to food supply.”

Congress last month proclaimed his landslide victory, as well as that of his running mate Sara Duterte, the daughter of the outgoing president, in the vice-presidential race.

Marcos Jr. received more than 31 million votes and Sara Duterte more than 32 million of the more than 55 million votes cast in the May 9 election – massive victories that will provide them robust political capital as they face tremendous challenges as well as doubts arising from their fathers’ reputations. It was the first majority presidential victory in the Philippines in decades.

Outgoing President Duterte presided over a brutal anti-drugs campaign that left thousands of mostly poor suspects dead in an unprecedented scale of killings the International Criminal Court was investigating as a possible crime against humanity. The probe was suspended in November, but the ICC chief prosecutor has asked that it be resumed immediately.

Marcos Jr. and Sara Duterte have faced calls to help prosecute her father and cooperate with the international court.

Marcos Jr., a former governor, congressperson and senator, has refused to acknowledge the massive human rights abuses and corruption that marked his father’s reputation. His father was toppled by a largely peaceful pro-democracy uprising in 1986, and died in 1989 while in exile in Hawaii without admitting any wrongdoing, including accusations that he, his family and cronies amassed an estimated $5 billion to $10 billion while in office. A Hawaii court later found him liable for human rights violations and awarded $2 billion to more than 9,000 Filipinos who filed a lawsuit against him for torture, incarceration, extrajudicial killings and disappearances.

Imelda Marcos and her children were allowed to return to the Philippines in 1991 and worked on a stunning political comeback, helped by a well-funded social media campaign to refurbish the family name.

Marcos Jr.’s alliance with Sara Duterte, whose father remains popular despite his human rights record, and a powerful name recall as a member of one of the country’s most well-known political dynasties, helped him capture the presidency. Many Filipinos too remained poor and grew disenchanted with post-Marcos administrations, Manila-based analyst Richard Heydarian said.

Along metropolitan Manila’s main avenue, democracy shrines and monuments erected after Marcos’ 1986 downfall stand prominently. The anniversary of his ouster is celebrated each year as a special national holiday, and a presidential commission that has worked for decades to recover ill-gotten wealth of the Marcoses still exists.