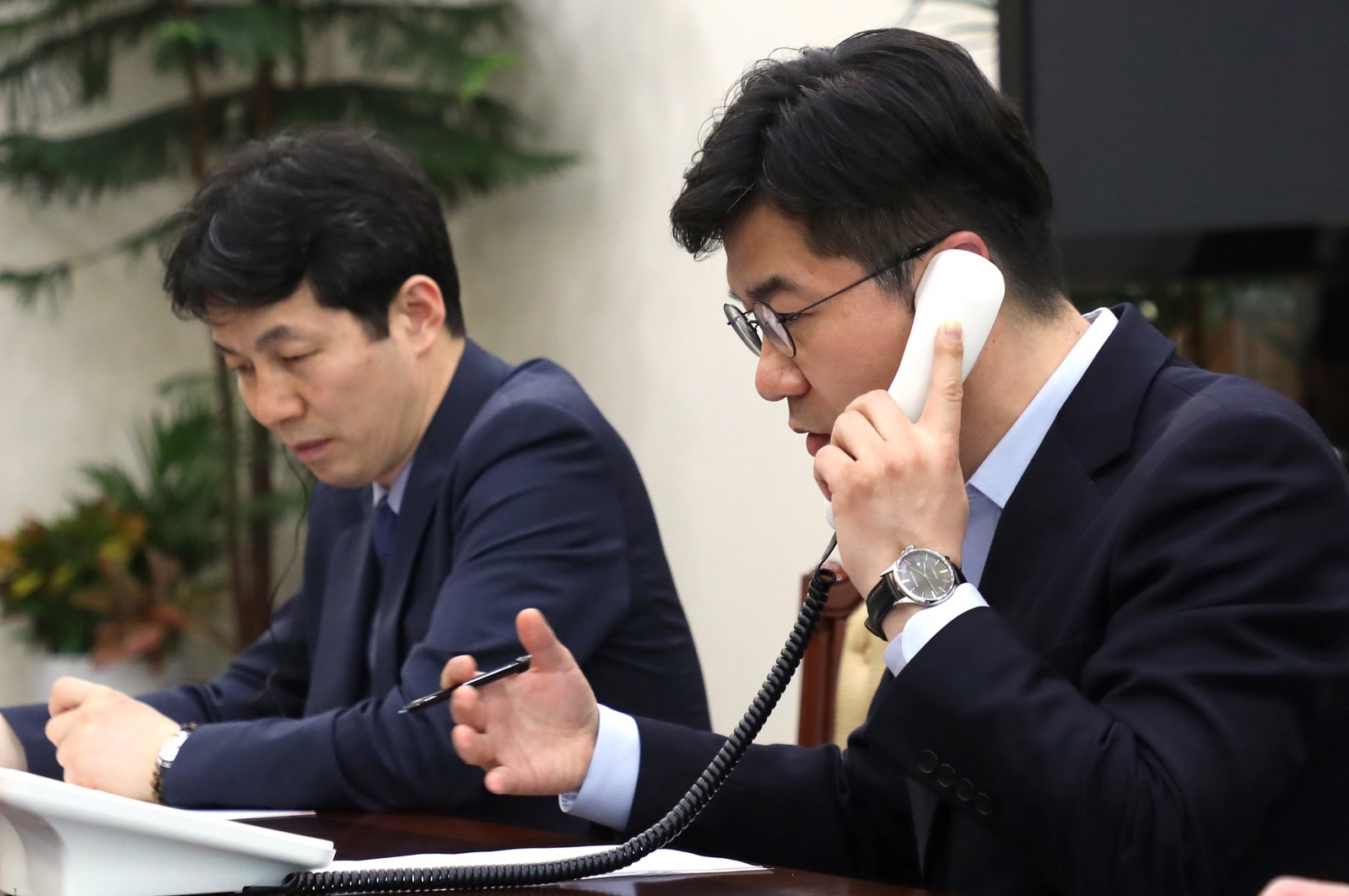 South Korean presidential officials make a test call to North Korea via a hotline between the leaders of the two Koreas at the presidential office in Seoul, South Korea, April 20, 2018. (EPA Photo)
by French Press Agency - AFP Jun 09, 2020 9:37 am
RECOMMENDED

North Korea is severing all official communication links with the South, it announced Tuesday in a move analysts said was aimed at manufacturing a crisis on the divided peninsula.

Since last week the North has issued a series of vitriolic denunciations of the South over activists sending anti-Pyongyang leaflets over the border – something defectors do on a regular basis.

In recent days authorities in the North have organized large-scale rallies across the country of citizens pledging their support, with inter-Korean ties at a standstill despite three summits between the North's leader Kim Jong Un and the South's President Moon Jae-in in 2018.

Tuesday's move cuts all official communication links between the two sides, but the immediate effect will be limited. Pyongyang has refused to engage with Seoul for months, with few if any conversations on the lines aside from test calls.

The latest development comes just three days before the two-year anniversary of a landmark summit between Kim and U.S. President Donald Trump in Singapore.

Negotiations over the North's nuclear program have been deadlocked since the collapse of a second meeting in Hanoi last year over what the North would be willing to give up in exchange for sanctions relief.

The impasse has left Pyongyang increasingly frustrated over the lack of concessions and analysts say it has taken no substantive steps toward giving up its weapons.

It has increasingly turned its anger toward Seoul rather than Washington, carrying out a series of weapons tests and other provocations in recent months – including last month shooting at a Southern guardpost in the Demilitarized Zone that divides the peninsula.

Pyongyang "will completely cut off and shut down the liaison line" between North and South from noon on Tuesday, the official Korean Central News Agency said, along with military hotlines and a communication link between the headquarters of the North's ruling Workers' Party and the South's presidential office.

Hotline calls by the South to the North rang unanswered as the deadline expired, Seoul's unification ministry said.

The decision was taken by Kim Yo Jong, the leader's sister and key adviser, and ruling party vice chairman Kim Yong Chol, KCNA said, in an explicit demonstration of the sibling's increasing authority in government.

Last week she issued a statement threatening to scrap a military pact with the South and close a liaison office – where activities have already been suspended for months due to the coronavirus outbreak.

Tuesday's statement repeatedly denounced defectors who send leaflets to the North by balloon and bottle criticizing Kim over his weapons programs and human rights abuses. It called them "disgusting riff-raff" and accused Seoul of complicity in their actions.

"This has driven the inter-Korean relations into a catastrophe," KCNA said, describing Seoul as an "enemy."

"We have reached a conclusion that there is no need to sit face to face with the south Korean authorities and there is no issue to discuss with them," it said.

Analysts say the move signals an acceleration in Pyongyang's strategy to ramp up pressure on the South.

"This is North Korean policy," said Andrei Lankov, director of Korea Risk Group, adding that Pyongyang wanted to show the South that "their demand for financial giveaways cannot be ignored completely and safely."

Since last month's DMZ shooting – which the South repeatedly insisted was accidental – the North has "tried to shake up the situation with a low-level provocation," said Shin Beom-chul, an analyst at the Korea Research Institute for National Strategy.

"It is trying to shake South Korea's policy toward the North," he said.

"With Kim Yo Jong in charge, this won't be a one-time thing," he added. "They are starting with South Korea and the hard-line stance will expand to the U.S."

The two sides remain technically at war after Korean War hostilities ended with an armistice in 1953 that was never replaced with a peace treaty.

Pyongyang is subject to multiple U.N. Security Council sanctions over its banned weapons programs but has carried out a series of tests in recent months – often describing them as multiple launch rocket systems, although Japan and the U.S. have called them ballistic missiles.