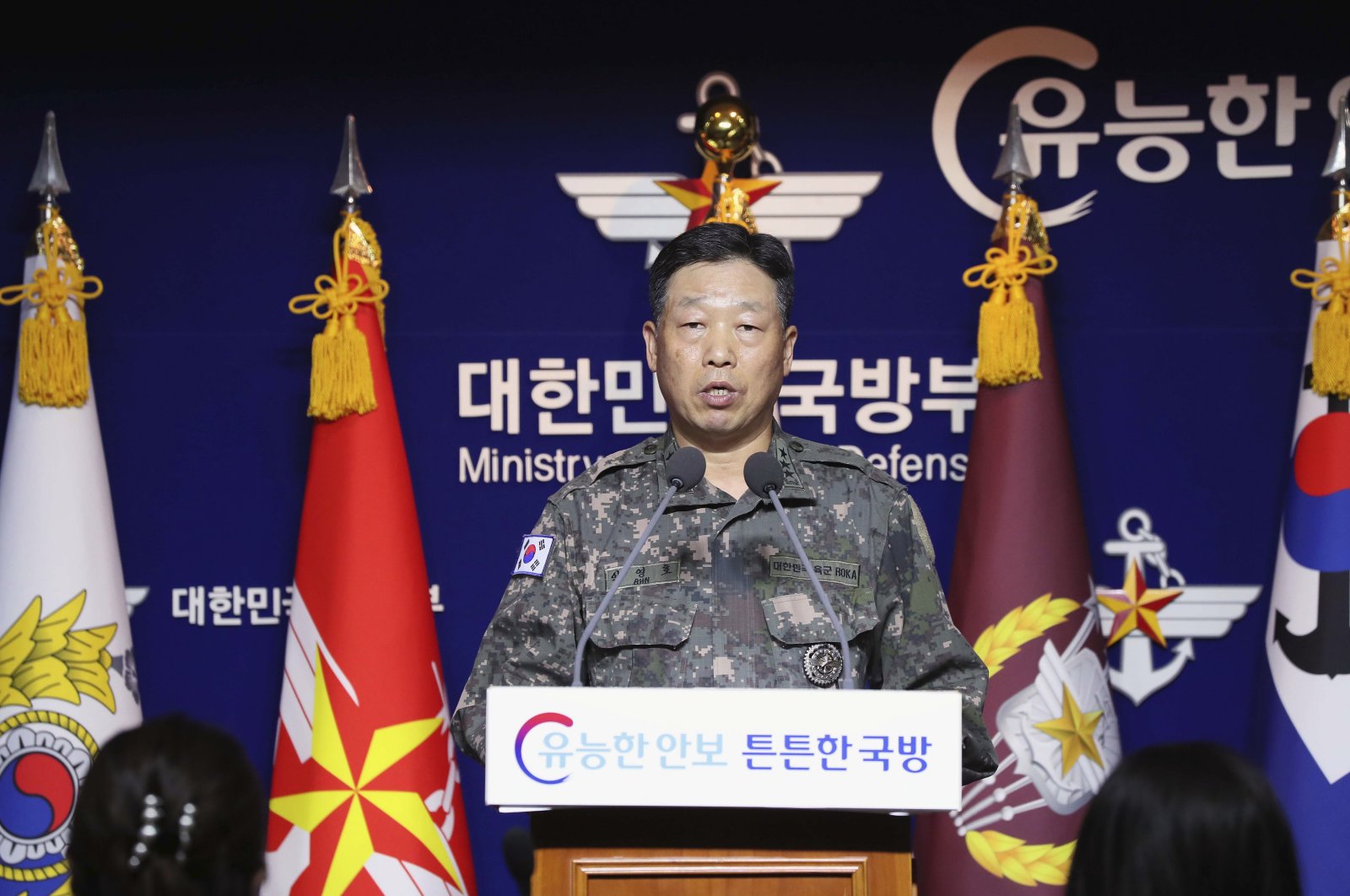 Lt. Gen. Ahn Young Ho, a top official at the South Korean military's office of the Joint Chiefs of Staff, speaks during a press conference at the Defense Ministry in Seoul, South Korea, Sept. 24, 2020. (AP Photo)
by ASSOCIATED PRESS
Sep 24, 2020 11:01 am

South Korea said Thursday North Korean troops fatally shot a South Korean government official who may have attempted to defect and set his body on fire after they found him on a floating object near the disputed sea boundary.

South Korean officials held a series of news conferences condemning what they called North Korea’s "atrocious acts” and urging it to apologize and punish those responsible. It’s unlikely North Korea will accept the South Korean demand, and the rivals’ ties – already strained amid a deadlock in broader nuclear diplomacy – could suffer a further setback, observers say.

According to Seoul, the man disappeared from a government ship that was checking on potential unauthorized fishing in an area south of the boundary Monday, a day before he was found in North Korean waters.

North Korea sent officials wearing gas masks aboard a boat near the man to learn why he was there on Tuesday afternoon. Later in the day, a North Korean navy boat came and opened fire on him, South Korea’s Defense Ministry said.

Sailors from the boat, putting on gas masks and protective suits, poured gasoline on his body and set it aflame, the Defense Ministry said, citing intelligence gathered by surveillance equipment and other assets.

It's unclear how he ended up in the North. But a defense official said the man might have tried to defect to North Korea, citing acquired information that he refused to elaborate. The official, requesting anonymity citing department rules, said the official was wearing a life jacket on a small floating object when he was found in North Korean waters.

The official said North Korea may have determined to kill him in line with its stringent anti-coronavirus rules that involve shooting anyone illegally crossing the border.

Gen. Robert Abrams, the commander of U.S. troops in South Korea, said last month that North Korea had stationed special forces along its border with China to keep smugglers out and that they had "shoot-to-kill orders in place” aimed at preventing the virus from entering the country.

North Korea has steadfastly said there has not been a single virus case on its territory, a claim widely disputed by many foreign experts. Observers say a pandemic could cause devastating consequences in North Korea because of its weak public health care system and a chronic shortage of medical supplies.

South Korea sent a message to North Korea via a communication channel at the U.S.-led U.N. Command in South Korea on Wednesday to ask about the missing official. But North Korea has not responded, according to the South Korean Defense Ministry.

"For whatever reason, North Korea cannot justify its soldiers fatally shooting our citizen and damaging his body, though he was unarmed and had no intention of resistance,” Suh said. He said South Korea will boost its defense posture along the border.

Little is known about the 47-year-old, except that he was among 18 officials aboard the government boat belonging to the Oceans and Fisheries Ministry. When his colleagues searched for him after his disappearance, they only found his shoes left on the ship. Days of searching involving aircraft and vessels came up empty-handed, according to the defense and oceans ministries.

The incident is expected to deepen already frosty Korean ties, whose exchange and cooperation programs have virtually all been suspended. In June, North Korea blew up an inter-Korean liaison office to protest South Korean civilians sending leaflets against the North across the border.

Some experts argued that the government explanation the official might have attempted to defect lacked evidence. They say the government may want to prevent strong anti-North sentiments to keep alive chances for talks with North Korea.

"A public servant defecting to North Korea? I think it sounds a bit strange as he has stable job security,” said Choi Kang, vice president of Seoul’s Asan Institute for Policy Studies. "Why did North Korea shoot a man defecting to the North voluntarily? I can also say the burning of his body was an attempt to conceal evidence.”

South Korea’s liberal government led by President Moon Jae-in has faced criticism by conservatives saying it is sympathizing with North Korea and fails to respond strongly to the North’s provocation, such as the liaison office destruction and crude insults.

The main conservative People Power Party urged Moon’s government to take stern action. "The reason for the government’s existence is protecting its people and their property,” a party statement said.

Defections of South Koreans to North Korea are highly unusual. More than 30,000 North Koreans have fled to South Korea in the past 20 years for political and economic reasons.

In July, however, a North Korean defector slipped back to North Korea, prompting North Korea to impose a lockdown of a border city and declare a state of emergency over virus concerns.