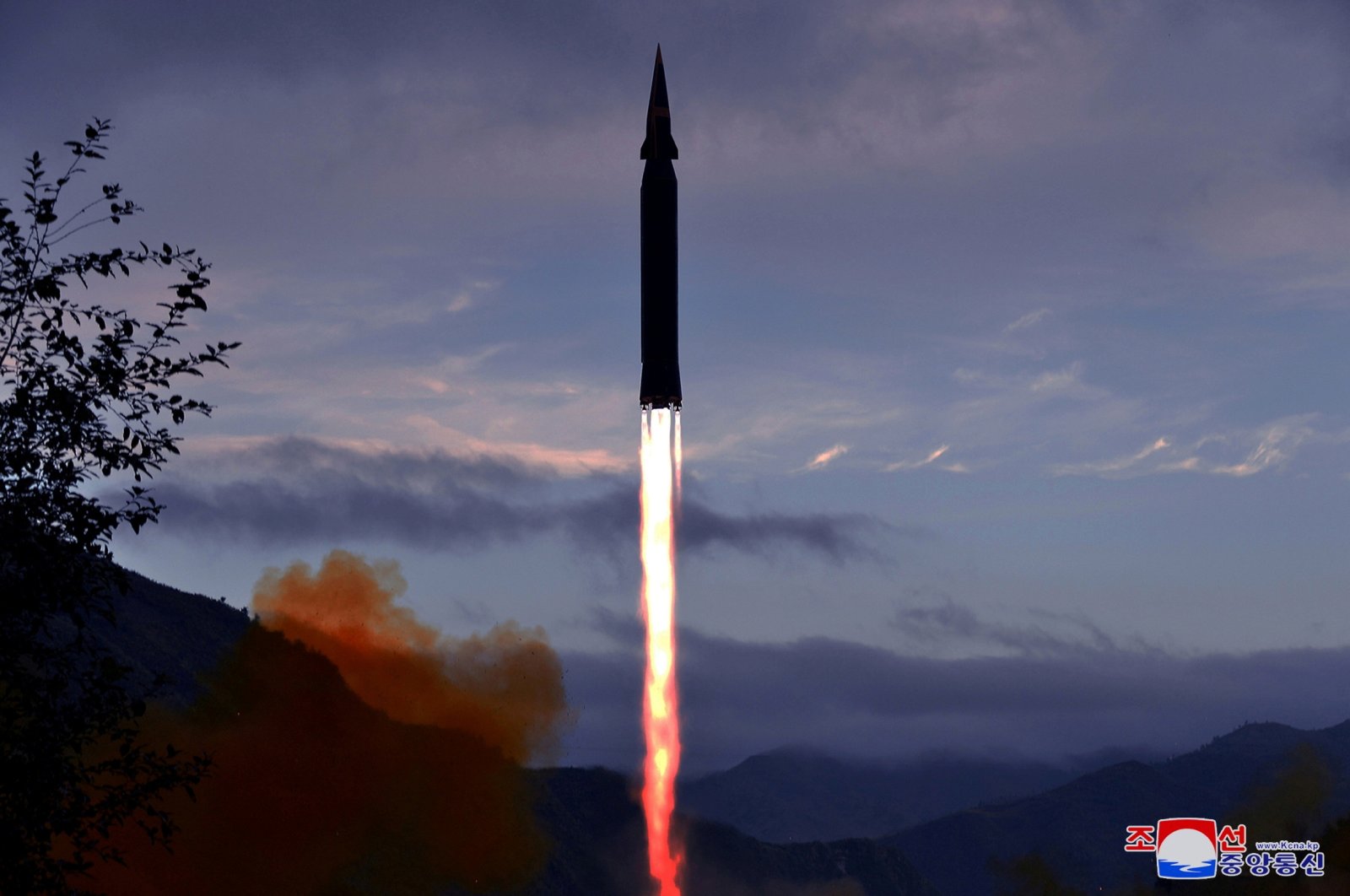 The newly developed hypersonic missile Hwasong-8 is test-fired by the Academy of Defence Science of the DPRK in Toyang-ri, Ryongrim County of Jagang Province, North Korea, in this undated photo released Sept. 29, 2021 by North Korea's Korean Central News Agency (KCNA). (KCNA via Reuters)
by ASSOCIATED PRESS Sep 29, 2021 8:43 am
RECOMMENDED

North Korea on Wednesday announced that it has successfully tested a new hypersonic missile in what would be the nuclear-armed nation's latest advance in weapons technology.

The missile test early Tuesday was North Korea's third round of launches this month and took place shortly before North Korea’s U.N. envoy accused the United States of hostility and demanded the Biden administration permanently end joint military exercises with South Korea and the deployment of strategic assets in the region.

A photo published in North Korea's state media showed a missile mounted with a finned, cone-shaped payload soaring into the air amid bright orange flames. The official Korean Central News Agency said the missile during its first flight test met key technical requirements, including launch stability and the maneuverability and flight characteristics of the “detached hypersonic gliding warhead.”

South Korea's Joint Chiefs of Staff assessed the missile to be at an early stage of development and said North Korea would need “considerable time” to be able to deploy it operationally.

The North’s announcement came a day after the South Korean and Japanese militaries said they detected North Korea firing a missile into its eastern sea. The U.S. Indo-Pacific Command said the launch highlighted “the destabilizing impact of (North Korea’s) illicit weapons program.”

In a separate report, KCNA said the North’s rubber-stamp parliament opened a session on Tuesday and discussed domestic issues such as economic policies and youth education and that the meetings would continue. Some experts speculate the North might use the session to address the deadlock on nuclear diplomacy, but the state media report did not mention any comments made toward Washington and Seoul.

At a ruling party meeting in January, leader Kim Jong Un named hypersonic glide vehicles, which are launched from a rocket before gliding into a target, among a wish-list of sophisticated military assets. KCNA described the new missile as an important addition to the country’s “strategic” weaponry, implying that the system is being developed to deliver nuclear weapons.

The report also said the test confirmed the stability of the missile’s fuel capsule, indicating a technology to add liquid propellant beforehand and keep it launch-ready for years. And a North Korean official said the North planned to expand the system to all its liquid-fuel missiles.

Liquid-fuel missiles are more vulnerable than solid-fuel missiles because they need to be fueled separately and transported to launch sites using trucks that can be seen by enemy satellites or other military assets.

Kim Dong-yub, a professor at the University of North Korean Studies in Seoul, said North Korea is trying to improve the mobility of these weapons.

North Korea last week made offers to improve relations with South Korea under certain conditions, apparently returning to its pattern of mixing weapons demonstrations with peace overtures to wrest outside concessions.

Negotiations over its nuclear program have been in a stalemate since February 2019. North Korea has demanded the lifting of U.S.-led sanctions while insisting it has the right to nuclear weapons. U.S. officials have made it clear the sanctions will stay in place until the North takes concrete steps toward denuclearization.

Kim Jong Un in recent political speeches has vowed to bolster his nuclear program as a deterrent to the U.S. His government has so far rejected the Biden administration’s offer to resume talks without preconditions, saying that Washington must abandon its “hostile policy” first, a term North Korea mainly uses to refer to sanctions and joint U.S.-South Korea military drills the North considers to be an invasion rehearsal.

Kim's influential sister reached out to Seoul twice last week, saying her country was open to resuming talks and reconciliatory steps if conditions are met.

Analysts say North Korea is using the South’s desire for inter-Korean engagement to pressure Seoul to extract concessions from Washington on Kim's behalf as he renews an attempt to leverage his nuclear weapons for badly needed economic and security benefits.

North Korea’s weapons displays could also be aimed at shoring up domestic unity as Kim faces perhaps his toughest moment nearing a decade in rule, with pandemic border closures unleashing further shock on an economy battered by sanctions and decades of mismanagement.

Experts say the North will likely continue its testing activity in the coming months as it dials up its pressure campaign, at least until China begins pushing for calm ahead of the Beijing Olympics early next year.