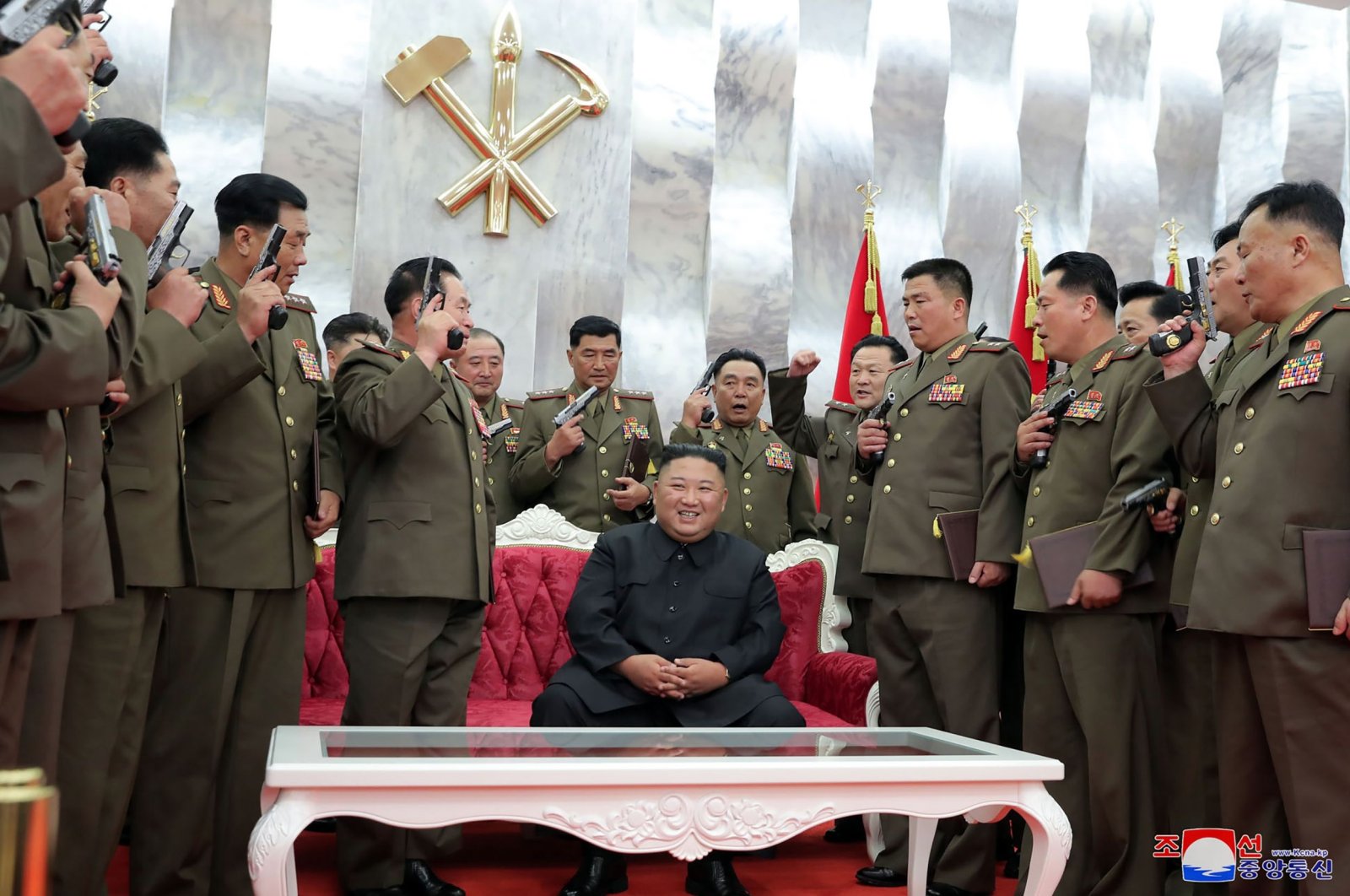 Assassination of Shinzo Abe: 2.5 seconds that sealed his fate

North Korean leader Kim Jong Un was shown surrounded by pistol-toting generals while in the South masked veterans were socially distanced as the two sides on Monday separately marked the armistice that ended Korean War hostilities.

The contrasting events marked 67 years since the cease-fire that left the peninsula divided and millions of families split by the Demilitarized Zone.

In the North's capital, Kim handed out commemorative pistols to dozens of generals and senior officers, who pledged their loyalty to him, state media reported.

The North reported its first suspected case of the coronavirus over the weekend – after insisting for months it had kept itself free of the disease that has swept the world – but pictures showed the generals all gathered close together for a group photo, none of them wearing masks.

In Seoul, scores of veterans – in facial coverings and socially distanced seats – attended a ceremony paying tribute to their efforts, themed "Days of Glory."

On-screen, dramatic reconstructions of the war were interspersed with interviews with foreign veterans and messages of support from current leaders of the countries that sent troops to support the South, among them U.S. President Donald Trump and his French counterpart Emmanuel Macron.

Millions of people were killed during the three-year conflict, which began when the Communist North invaded the U.S.-backed South as leader Kim Il-Sung – grandfather of the incumbent – sought to reunify by force the peninsula Moscow and Washington had divided at the end of World War II.

The Chinese and Soviet-backed North fought to a standstill against the South and a U.S.-led United Nations coalition.

Hostilities ended on July 27, 1953, with a cease-fire that has never been replaced by a peace treaty.

The North has subsequently built up a nuclear arsenal that it says it needs to protect itself against a U.S. invasion and has been subjected to multiple international sanctions as a result.

Pyongyang regards the conflict – which it calls the Glorious Fatherland Liberation War – as a victory, and the anniversary is a public holiday.

The Korean Central News Agency (KCNA) reported that Kim presented his generals over the weekend with "commemorative pistols bearing his august name in token of his trust."

The weapons were named after Mount Paektu, the dormant volcano on the Chinese-Korean border that is regarded as the spiritual birthplace of the Korean people.

In the pictures, the chief of the general staff Vice Marshal Pak Jong Chon, who was sitting to Kim's right, carefully pointed his pistol upwards rather than toward the leader.

At another Southern ceremony in Panmunjom, the truce village in the Demilitarised Zone, Gen. Robert Abrams, the commander of U.N. Command and U.S. Forces Korea, noted the stark deterioration in conditions on the peninsula.

Nuclear discussions between Washington and Pyongyang have been largely at a standstill since the Hanoi summit collapsed over sanctions relief and what the North would be willing to give up in return.

Relations between Seoul and Pyongyang have steadily worsened as last month the North blew up a liaison office on its side of the border.

Previously, "there was an air of cautious optimism as the world witnessed a significant and palpable reduction of tensions between North and South Korea," Abrams told a handful of uniformed officers and diplomats in masks.

In sight of the emblematic sky-blue huts that straddle the border, Abrams went on: "Today, this cautious optimism has shifted somewhat to an air of uncertainty."

The U.S. stations 28,500 troops in the South to defend its interests and protect the country from its northern neighbor.

Assassination of Shinzo Abe: 2.5 seconds that sealed his fate