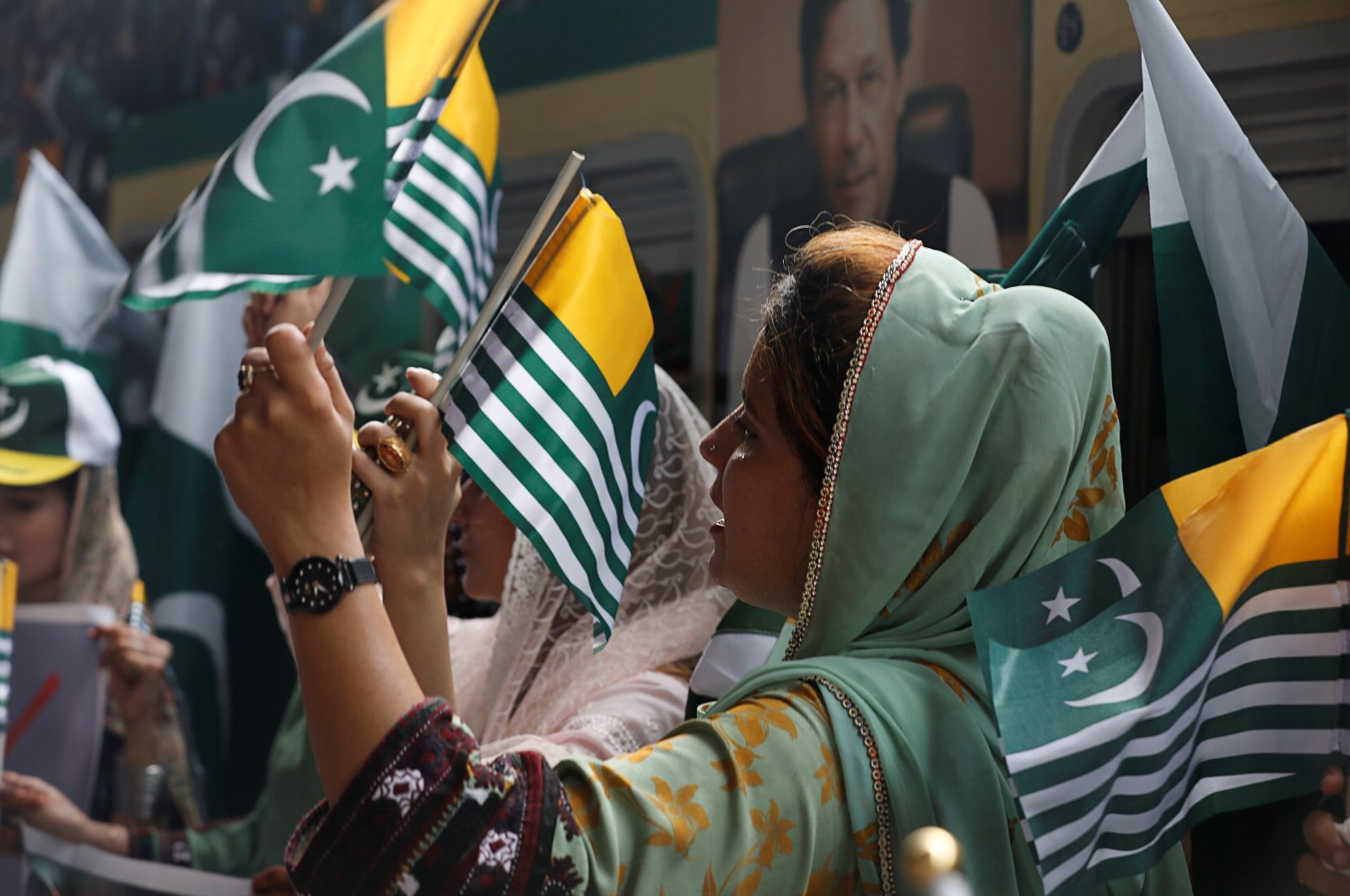 A woman waves flags with others as they mark the "Day of Exploitation in Kashmir" one year after the Indian government split the state of Jammu and Kashmir into two federally controlled territories and took away its special privileges, during a march in Karachi, Pakistan, Aug. 5, 2020. (Reuters Photo)
by Agencies Aug 05, 2020 11:56 am
RECOMMENDED

Protests were planned across Pakistan to mark the anniversary of New Delhi stripping Muslim-majority Indian Kashmir of its semi-autonomous status, a move that outraged Islamabad.

Kashmir, a disputed Himalayan territory, has been split since 1947 between India and Pakistan, both of which claim it in full and have fought wars over it.

"India stands exposed before the world, yet again, as an oppressor and aggressor," Khan said in a statement.

Prime Minister Narendra Modi's Hindu nationalist government had promised the move would bring peace and prosperity to Indian Kashmir after three decades of violence sparked by an anti-India uprising.

Pakistan, however, has alleged it is a violation of the rights of the Kashmiri people.

Khan accused India of trying to turn Kashmir's Muslim majority into a minority by ending restrictions on outsiders buying up property "in blatant violation of ... U.N. Security Council Resolutions and international laws."

The change in rules has sparked fears that the Modi government is pursuing an Israel-style "settler" project.

Police were enforcing tight restrictions in Indian-administered Kashmir on Wednesday, where religious and political groups had called on residents to observe a "black day."

In the Pakistani capital Islamabad, a one-minute silence was held, along with a rally led by President Arif Alvi.

"India has learned from Israel how to change the demography (of Kashmir)," Alvi told the rally.

Khan led a rally through Muzaffarabad, the capital of Pakistan-administered Azad Jammu and Kashmir, where a few thousand people had gathered. He was due to address the region's legislative assembly.

Dozens of rallies are expected in other major Pakistani cities too.

On Tuesday, Pakistan released a new official map showing all of Kashmir as its territory.

Tensions spiraled between the nuclear-armed neighbors after India revoked Kashmir's autonomy and imposed movement and communications restrictions to quell unrest.

On Aug. 5 last year, the Indian government scrapped the special status of the country’s only Muslim-majority state. Jammu and Kashmir were also split into two federally administered territories.

Simultaneously, New Delhi locked the region down, detaining thousands of people that included dozens of top politicians, imposing restrictions on movement and enforcing a communications blackout.

Kashmir is held by India and Pakistan in parts but claimed by both in full. A small sliver of the region is also controlled by China.

Some groups in Indian-administered Kashmir have been fighting against Indian rule for independence or unification with neighboring Pakistan.