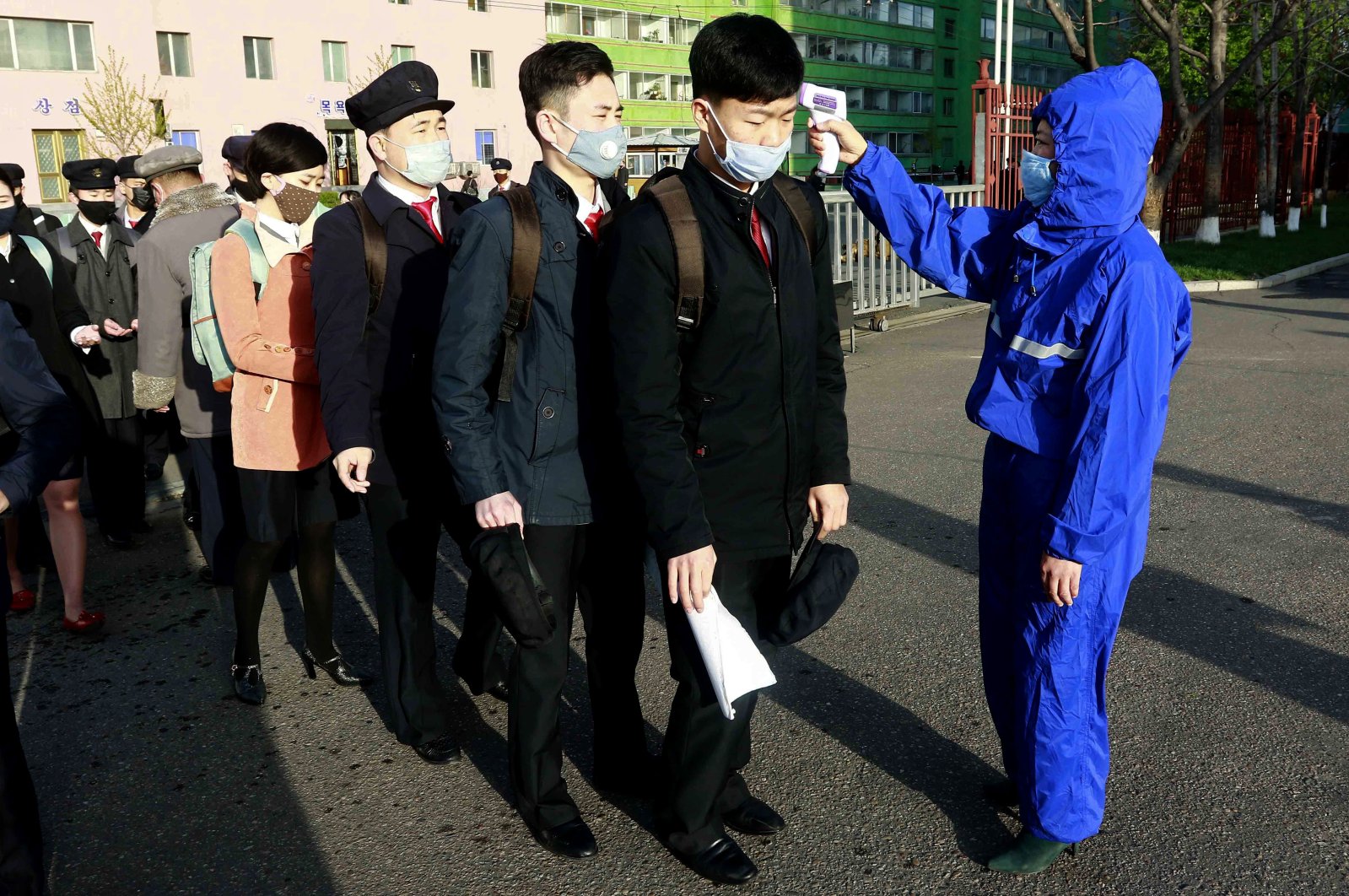 Students wearing face masks have their temperature checked as a precaution against the new coronavirus before returning to classes at Kim Chaek University of Technology, Pyongyang, North Korea, April 22, 2020. (AP Photo)
by ASSOCIATED PRESS May 06, 2020 12:11 pm
RECOMMENDED

Although North Korea has taken intense quarantine measures, it maintains there are have been no domestic infections. Many outside experts remain skeptical, however, and warn that an epidemic could be dire due to the North’s fragile health care capacity.

South Korea's National Intelligence Service told a closed-door parliamentary committee in Seoul that the pandemic is one of the reasons why Kim Jong Un has made much fewer public appearances this year, according to Kim Byung Kee, one of the lawmakers who attended the spy agency meeting.

As of Wednesday, Kim Jong Un has appeared in public 17 times this year, compared with an average of 50 appearances in the same time period each year since he took power in late 2011, the lawmaker said, citing the NIS.

The NIS said it could not rule out a virus outbreak in North Korea because traffic along the China-North Korea border was active before the North closed crossings in January to try to stop the spread of the virus, according to the lawmaker.

The NIS declined to confirm Kim’s comments in line with its practice of not commenting on information provided to lawmakers. Kim did not discuss how the NIS obtained its information.

Last Friday, Kim Jong Un ended his 20-day public absence when he appeared at a ceremony marking the opening of a fertilizer factory near Pyongyang. His time away triggered rumors about his health and worries about the future of his country.

The NIS repeated a South Korean government assessment that Kim remained in charge of state affairs even during his absence. His visit to the factory was aimed at showing his resolve to address public pay issues and boost confidence, Kim Byung Kee cited the NIS as saying.

The NIS said the virus pandemic was hurting North Korea's economy, mainly because of the border closure with China – its biggest trading partner and aid provider. China accounts for about 90% of North Korea’s external trade flow.

The trade volume between North Korea and China in the first quarter of this year was $230 million, a 55% decline from the same period last year. In March, bilateral trade suffered a 91% drop in value, the NIS was quoted as saying.

This led to the prices of imported foodstuffs, such as sugar and seasonings skyrocketing, Kim Byung Kee quoted the spy agency as saying. He said the NIS also told lawmakers that residents in Pyongyang, the capital, recently rushed to department stores and other shops to stock up on daily necessities and waited in long lines.

The NIS said prices in North Korea "are being stabilized a little bit” after authorities clamped down on people cornering the market, Kim said in a televised briefing.

In recent months, Kim Jong Un has conducted a spate of missile and other weapons tests in what analysts said were attempts to upgrade the North’s weapons programs. Earlier, Kim vowed to bolster his nuclear arsenal and build up internal strength to withstand U.S.-led sanctions amid stalled denuclearization talks with President Donald Trump.