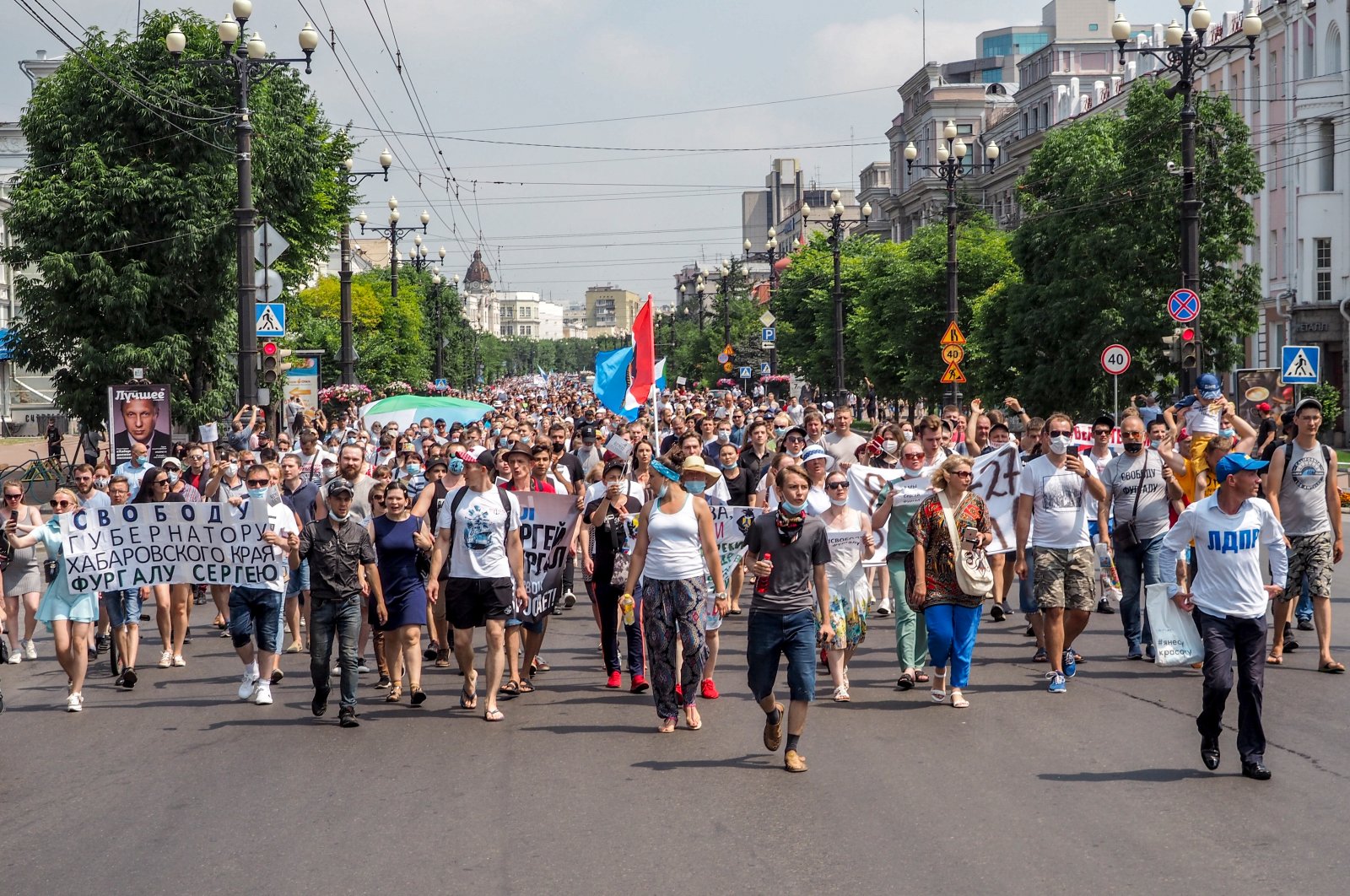 Mass rallies challenging the Kremlin rocked Russia's Far East city of Khabarovsk again on Saturday, as tens of thousands took to the streets to protest the arrest of the region’s governor on charges of involvement in multiple murders.

The massive unauthorized crowds gathered despite local officials’ attempts to discourage people from taking to the streets, citing the coronavirus epidemic and an alleged averted terrorist threat.

Local media estimated the rally in the city 3,800 miles east of Moscow drew 15,000 to 50,000 people, while city authorities put the number at 10,000. Hundreds of people have rallied in the city every day this week against the arrest of Sergei Furgal, reflecting widespread anger over the arrest of the popular governor and a simmering discontent with the Kremlin’s policies.

Furgal, the Khabarovsk region governor, was arrested on July 9 and flown to Moscow where he was put in jail for two months. Russia’s Investigative Committee says he is suspected of involvement in several murders of businessmen in 2004 and 2005.

Furgal has denied the charges, which relate to his time as a businessman importing consumer goods ranging from timber and metals. Khabarovsk residents dismissed the charges against him as unsubstantiated and denounced the Kremlin for targeting a governor they elected.

“It’s not only about this (whether Furgal arrest is legal or not). People are fed up with the way we are treated, that they can simply take away our choice," protester Mikhail Yerashchenko told The Associated Press on Saturday.

A member of the nationalist Liberal Democratic Party, Furgal was elected governor in 2018, defeating the Kremlin-backed incumbent. His victory was unexpected: Furgal didn't actively campaign and toed the Kremlin's line, publicly supporting his rival.

People voted for him nonetheless, delivering a humiliating blow to the main Kremlin party, United Russia, that has been losing seats in regional governments over the past two years.

During his two years in office, Furgal earned a reputation of being “the people's governor." He cut his own salary, ordered the sale of an expensive yacht that the previous administration bought, met with protesters when rallies happened and significantly reduced flight fares for residents in remote areas.

“Furgal became a political symbol for the residents of the region, and all accusations – no matter how grave – are from another, non-political dimension,” political analyst Abbas Gallyamov said in a Facebook post.

Last Saturday, crowds of reportedly up to 35,000 people rallied in Khabarovsk. Protesters demanded that Furgal's trial be moved to Khabarovsk, with one saying “we have elected him and it's up to us to judge him." Some questioned the timing of the arrest, pointing to Furgal's decadelong stint as a lawmaker in the Russian parliament before running for governor, during which the murder charges never came up.

The unauthorized protests are the largest ever in Khabarovsk, a city of 590,000. Kremlin spokesman Dmitry Peskov called the situation “not standard" this week. Moscow has not yet appointed an acting governor 11 days after Furgal's arrest.

Police didn't interfere with Saturday's rally. Protesters held banners demanding Furgal's freedom and chanted “I, you, he and she – the entire country is for Furgal”.

Smaller rallies in support of Furgal also took place Saturday in Komsomolsk-on-Amur, another big city in the Khabarovsk region, and in the city of Vladivostok in the neighboring Primorye region.

“Though I’m almost 70, I worry sincerely about my region, about Russia and our nation, about Furgal and freedom. I want us to be free," Alla Sokolova, a protester in Khabarovsk, told the Associated Press (AP).