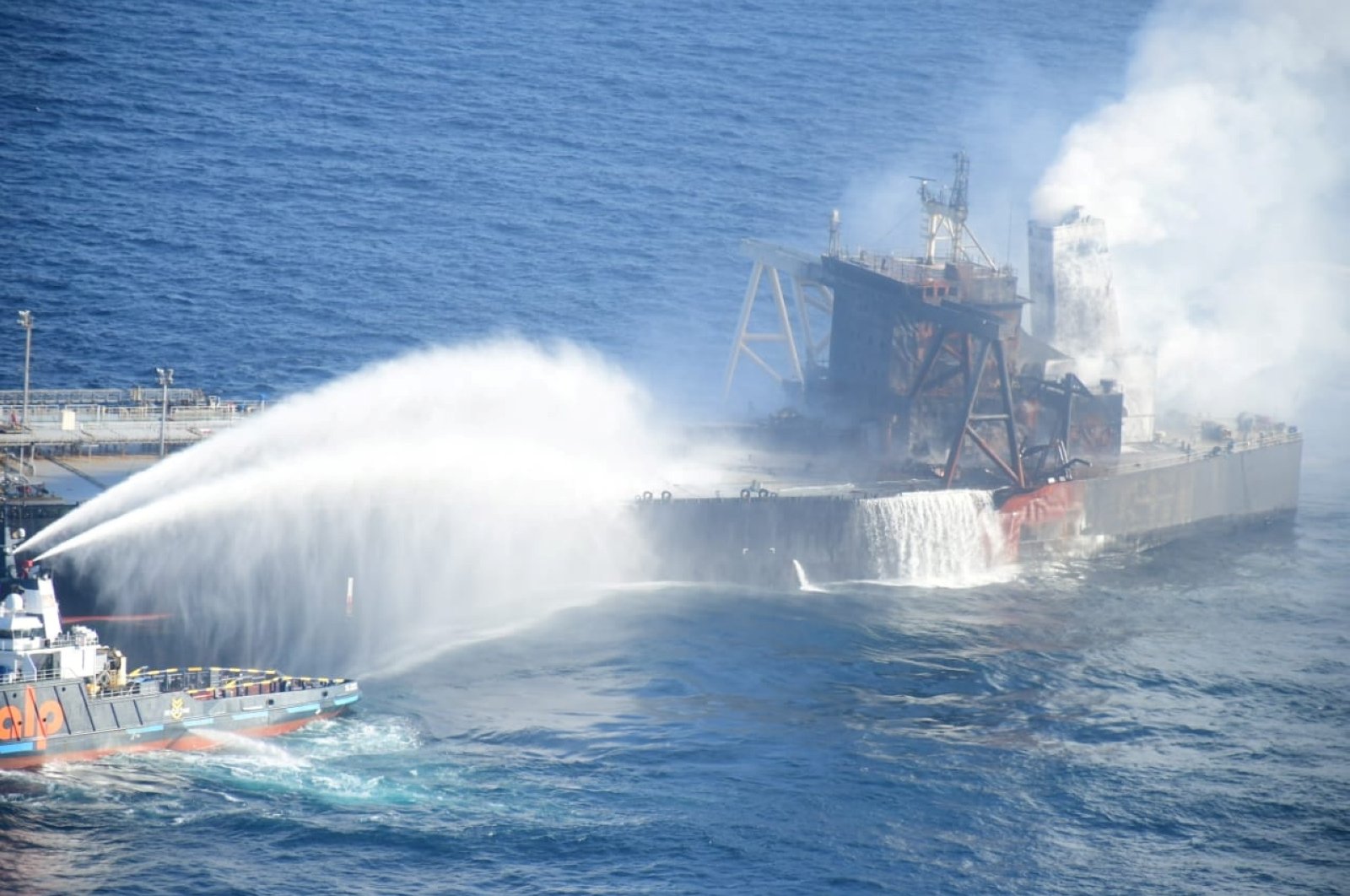 A Sri Lanka Navy boat sprays water on the New Diamond, a very large crude carrier (VLCC) chartered by Indian Oil Corp (IOC), that was carrying the equivalent of about 2 million barrels of oil, after a fire broke out off the east coast of Sri Lanka, Sept. 6, 2020. (Sri Lankan Airforce media Photo via Reuters)
by ASSOCIATED PRESS Sep 06, 2020 5:10 pm
RECOMMENDED

A fire on a large oil tanker drifting off Sri Lanka's coast was extinguished on Sunday after burning for three days, as a team of experts moved to salvage the vessel, the country's navy said.

"As of now, the fire has been completely extinguished,” the navy chief, Vice Adm. Nishantha Ulugetenne, said in comments that were broadcast on local TV channels. But he cautioned that there is a risk of another fire erupting due to the heat of the ship's iron plates.

Earlier Sunday, the navy said a team of experts was already on one of the tugboats. Another 10 British and Dutch professionals, including rescue operation specialists, disaster evaluators and legal consultants, were also expected to join the mission to salvage the ship.

With its engines shut down, the tanker – carrying nearly 2 million barrels of crude oil – drifted about 20 nautical miles (37 kilometers) from Sri Lanka’s eastern coast on Friday before a tugboat towed it farther out to sea.

The fire killed one crew member and injured another. Both are Filipino. The injured third engineer was hospitalized in stable condition.

The fire began in an engine room boiler but did not spread to the tanker’s oil storage area and no leak has been reported, the navy said. Sri Lankan officials have warned of possible massive environmental damage to Sri Lanka if the ship leaks or explodes.

The head of Sri Lanka’s Marine Environment Protection Authority, Darshani Lahandapur, had said the Indian Ocean island nation does not have the resources or capacity to combat such a massive disaster and appealed for help from regional countries. She said her organization plans to take legal action over the fire.

The tanker had 23 crew members – 18 Filipinos and five Greeks. Twenty-one crew members left the tanker uninjured as the fire burned.

The tanker was transporting crude oil from the port of Mina Al Ahmadi in Kuwait to the Indian port of Paradip, where the state-owned Indian Oil Corp. has a refinery.