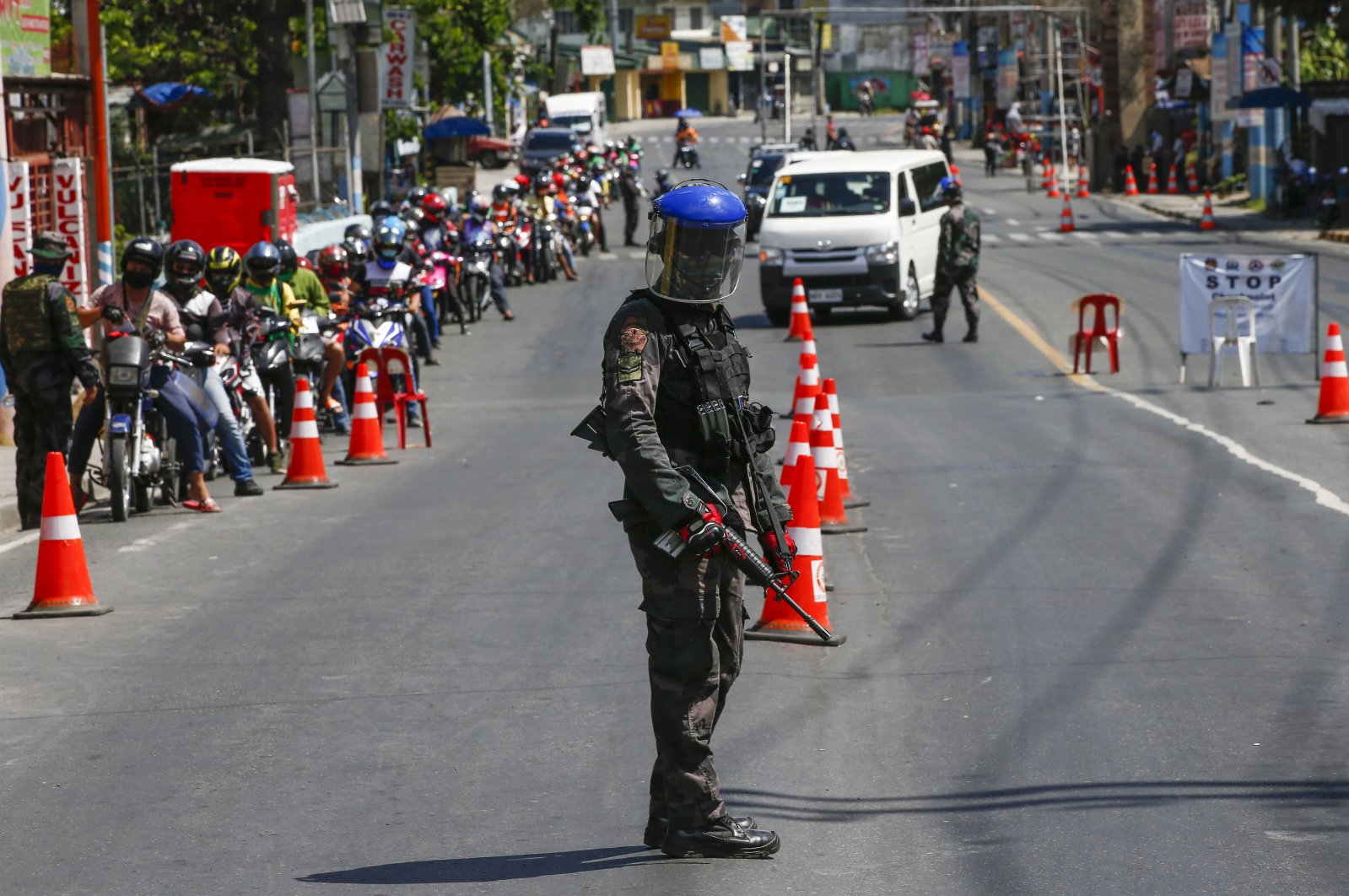 A police officer guards a checkpoint at the border between Rizal province and Marikina City, Metro Manila, Philippines, Thursday, April 2, 2020. (EPA Photo)
by Compiled from Wire Services Apr 02, 2020 10:21 am
RECOMMENDED

Philippine President Rodrigo Duterte has told security forces they should shoot dead anyone causing "trouble" in areas locked down due to the coronavirus pandemic.

About half the country's roughly 110 million people are currently under quarantine – including millions in deep poverty, left jobless by tough restrictions on movement.

"My orders are to the police and military, also village officials, that if there is trouble or the situation arises that people fight and your lives are on the line, shoot them dead," Duterte said.

"Is that understood? Dead. Instead of causing trouble, I will bury you," he said, adding that the outbreak is getting worse more than two weeks into the lockdown.

Hours before Duterte gave the order in a speech late Wednesday, nearly two dozen people from a slum community in the capital Manila were arrested for holding a protest that accused the government of failing to provide food aid to the poor.

They also follow outrage among the medical community about social stigma and instances of hospital workers suffering physical abuse and discrimination, which Duterte said must be stopped.

The Philippines has so far detected 2,311 cases and reported 96 deaths, but the country has only begun ramping up testing and so the number of confirmed infections is expected to keep rising. Infections are now being reported in the hundreds every day.

Activists deride Duterte, who came to power in a landslide 2016 election victory, over his fierce rhetoric and accuse him of inciting violence and vigilantism, as shown in his war on drugs, during which police and mystery gunmen have killed thousands of people accused of using or selling drugs.

Critics allege that Duterte's drug war targets the poor and leaves the rich and powerful untouched while reinforcing a culture of impunity.

The president's latest comments drew an immediate rebuke from rights groups who urged the government to provide much-needed relief supplies instead of issuing threats of violence.

"It is deeply alarming that President Duterte has extended a policy of shoot-to-kill ... Deadly, unchecked force should never be referred to as a method to respond to an emergency such as the COVID-19 pandemic," Amnesty International Philippines said in a statement.

As frequently happens after Duterte makes an announcement that sparks concern, officials said the president used hyperbole to make a point.

"Probably the president just overemphasized on implementing the law in this time of crisis," he added.

The quarantine, which affects Manila's 12 million people, has shuttered most businesses and brought nearly all social, religious and business activity to a halt.