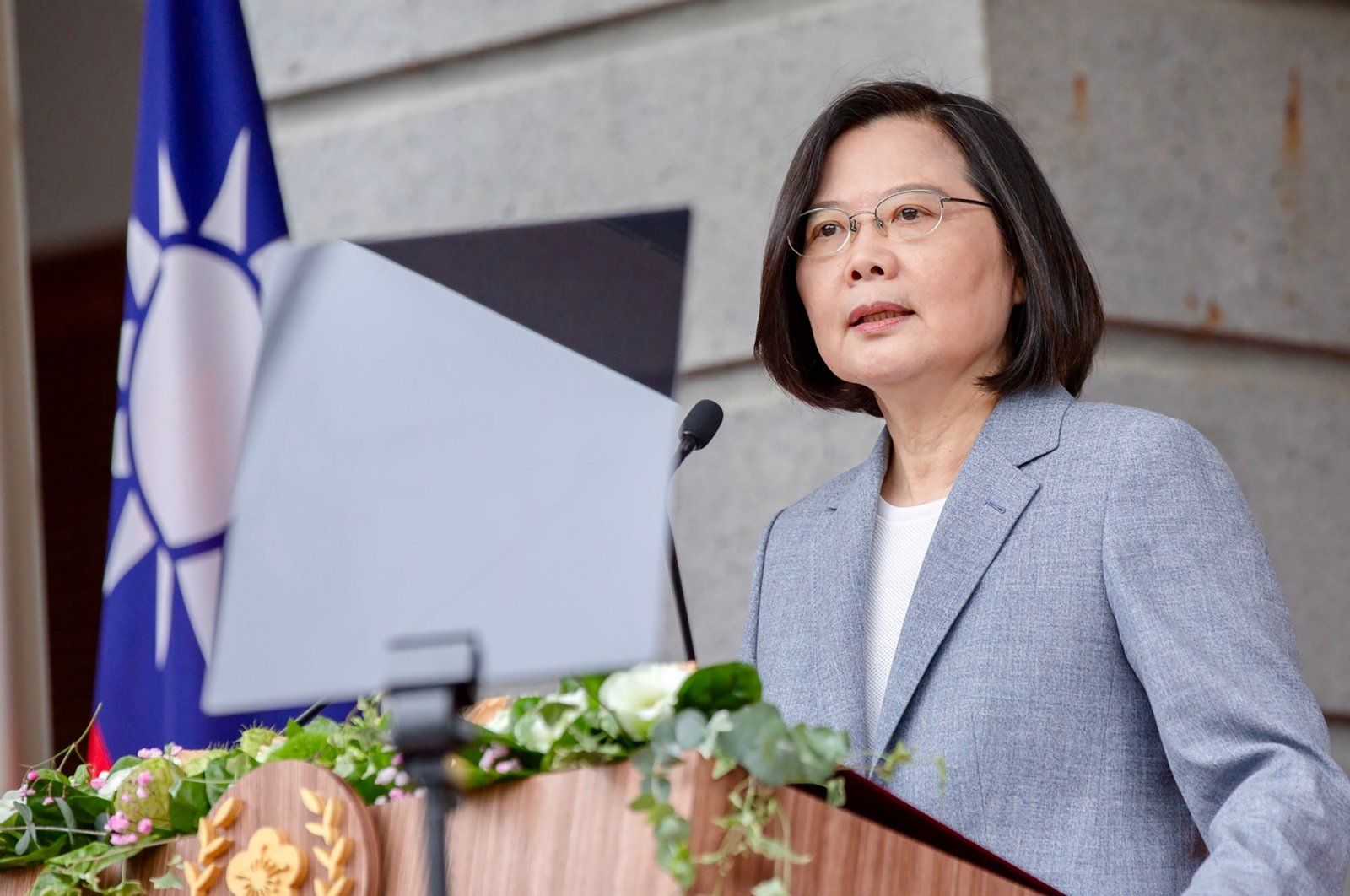 Taiwan's President Tsai Ing-wen speaking at the Taipei Guest House as part of her inauguration for her second term in office, Taipei, Taiwan, May 20, 2020. (AFP Photo)
by REUTERS May 20, 2020 8:59 am
RECOMMENDED

Taiwan cannot accept becoming part of China under its "one country, two systems" offer of autonomy, President Tsai Ing-wen said on Wednesday, in a strong rejection of China's sovereignty claim, but called for talks so that both sides could coexist.

In a speech after being sworn in for her second and final term in office, Tsai said relations between Taiwan and China had reached a historical turning point.

"Both sides have a duty to find a way to coexist over the long term and prevent the intensification of antagonism and differences," she said.

Tsai and her Democratic Progressive Party won January's presidential and parliamentary elections by a landslide, vowing to stand up to China, which claims Taiwan as its own and says it would be brought under Beijing's control by force if needed.

"Here, I want to reiterate the words 'peace, parity, democracy, and dialogue'. We will not accept the Beijing authorities' use of 'one country, two systems' to downgrade Taiwan and undermine the cross-strait status quo. We stand fast by this principle," Tsai said.

China uses the "one country, two systems" policy, which is supposed to guarantee a high degree of autonomy, to run the former British colony of Hong Kong, which returned to Chinese rule in 1997. It has offered it to Taiwan, though all major Taiwanese parties have rejected it.

"Reunification is a historical inevitability of the great rejuvenation of the Chinese nation," it said. "We have the firm will, full confidence, and sufficient ability to defend national sovereignty and territorial integrity."

China views Tsai as a separatist bent on formal independence for Taiwan. Tsai says Taiwan is an independent state called the Republic of China, its official name, and does not want to be part of the People's Republic of China governed by Beijing.

China has stepped up its military drills near Taiwan since Tsai's re-election, flying fighter jets into the island's air space and sailing warships around Taiwan.

Tsai said Taiwan has made the greatest effort to maintain peace and stability in the narrow Taiwan Strait that separates the democratic island from its autocratic neighbor China.

"We will continue these efforts, and we are willing to engage in dialogue with China and make more concrete contributions to regional security," she added, speaking in the garden of the old Japanese governor's house in Taipei, in front of a socially-distanced audience of officials and diplomats.

Tsai said that Taiwan will continue its fight to participate in international organizations, and "bolster ties with the United States, Japan, Europe, and other like-minded countries."

Taiwan has accused China of exerting pressure to keep Taiwan out of the World Health Organization (WHO). China says Taiwan is a Chinese province with no right to the trappings of a state.

The Trump administration has strongly backed Taiwan with arms sales and diplomatic support, even though the U.S. recognizes only China's government, becoming another source of already deep tension between Washington and Beijing.

U.S. Secretary of State Mike Pompeo sent his congratulations to Tsai on Tuesday, praising her "courage and vision in leading Taiwan's vibrant democracy," in a rare high-level message from Washington direct to Taiwan's government.

China cut off a formal talks mechanism with Taiwan in 2016 after Tsai first won the election.

Yao Chia-wen, a senior adviser to Tsai, told Reuters the chance of talks with China was not likely given ongoing tensions.

"We are ready to engage with them any time, but China is unlikely to make concessions to Taiwan," he said. "In the next four years, there's little chance for the cross-strait relationship to improve."