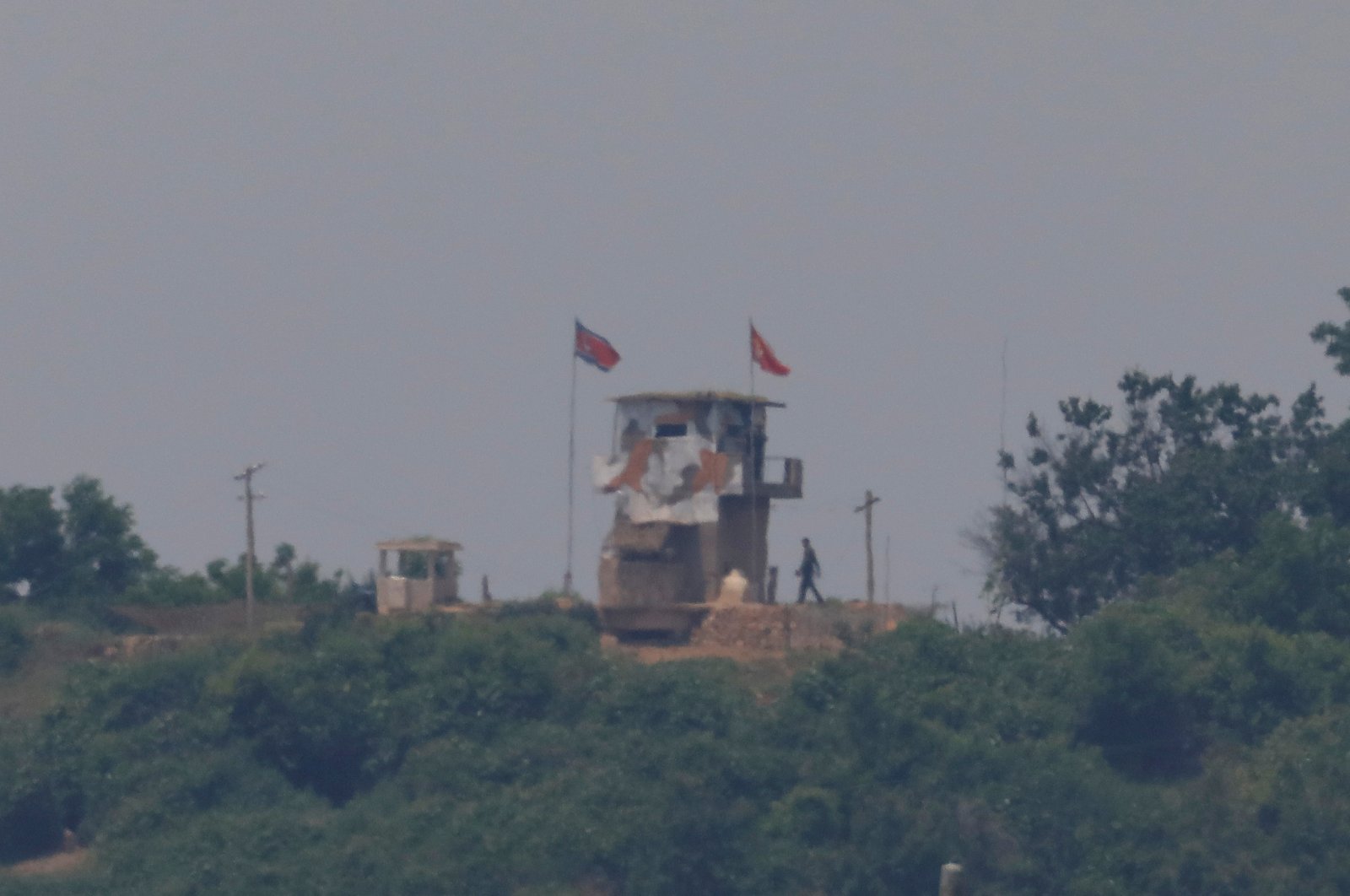 A North Korean soldier is seen beside his guard post inside North Korean territory in this picture taken near the demilitarized zone separating the two Koreas in Paju, South Korea, June 16, 2020. (Reuters Photo)
by Compiled from Wire Services Jun 16, 2020 10:09 am
RECOMMENDED

North Korea blew up an inter-Korean liaison office building just north of the heavily armed border with South Korea on Tuesday in a dramatic display of anger that sharply raises tensions on the Korean Peninsula and puts pressure on Washington and Seoul amid deadlocked nuclear diplomacy.

The demolition of the building, which is located on North Korean territory and had no South Koreans working there, is largely symbolic. But it’s still likely the most provocative thing North Korea has done since it entered nuclear diplomacy in 2018 after a U.S.-North Korean standoff had many fearing war. It will pose a serious setback to the efforts of South Korean President Moon Jae-in to restore inter-Korean engagement.

North Korea’s official Korean Central News Agency said the nation destroyed the office in a "terrific explosion" because its “enraged people” were determined to "force (the) human scum and those, who have sheltered the scum, to pay dearly for their crimes,” apparently referring to North Korean defectors who for years have floated anti-Pyongyang leaflets across the border. The agency did not detail how the office in the North Korean border town of Kaesong was destroyed. Photos from the South's Yonhap News Agency showed smoke rising from what appeared to be a complex of buildings. The agency said the area was part of a now-shuttered inter-Korean industrial park where the liaison office was located.

The North also said it has cut off all government and military communication channels with the South while threatening to abandon bilateral peace agreements reached during North Korean leader Kim Jong Un’s three summits with Moon in 2018.

South Korea's presidential office said on Tuesday it will respond sternly if North Korea continues to raise tensions after destroying a joint liaison office that was a symbol of inter-Korean reconciliation. The destruction of the office "broke the expectations of all people who hope for the development of inter-Korean relations and lasting peace on the peninsula," Kim You-geun, deputy national security adviser, told a briefing. "We're making clear that the North is entirely responsible for all the consequences this might cause," he said.

The Kremlin on Tuesday called for restraint following a sharp escalation in tensions after North Korea blew up a liaison office near its border with South Korea. "This is a concern, we urge all parties to show restraint," Kremlin spokesman Dmitry Peskov told reporters, adding that Russia would be closely monitoring the situation. The Kremlin was not planning any talks at the highest level for the moment, he said.

North Korea and South Korea are still technically at war. Inter-Korean relations have been strained since the breakdown of a second summit between Kim and Trump in Vietnam in early 2019. That summit fell apart because of disputes over how much sanctions should be lifted in return for Kim’s dismantling his main nuclear complex.

In 2018, the rival Koreas opened their first liaison office at Kaesong to facilitate better communication and exchanges since they were divided into a U.S.-backed South Korea and a Soviet-supported North Korea at the end of the World War II in 1945. When the office opened, relations between the Koreas flourished after North Korea entered talks with South Korea and the United States on its nuclear weapons program. Kim later vowed to expand his nuclear arsenal, introduce a new strategic weapon and overcome the U.S.-led sanctions that he said “stifles” his country’s economy.