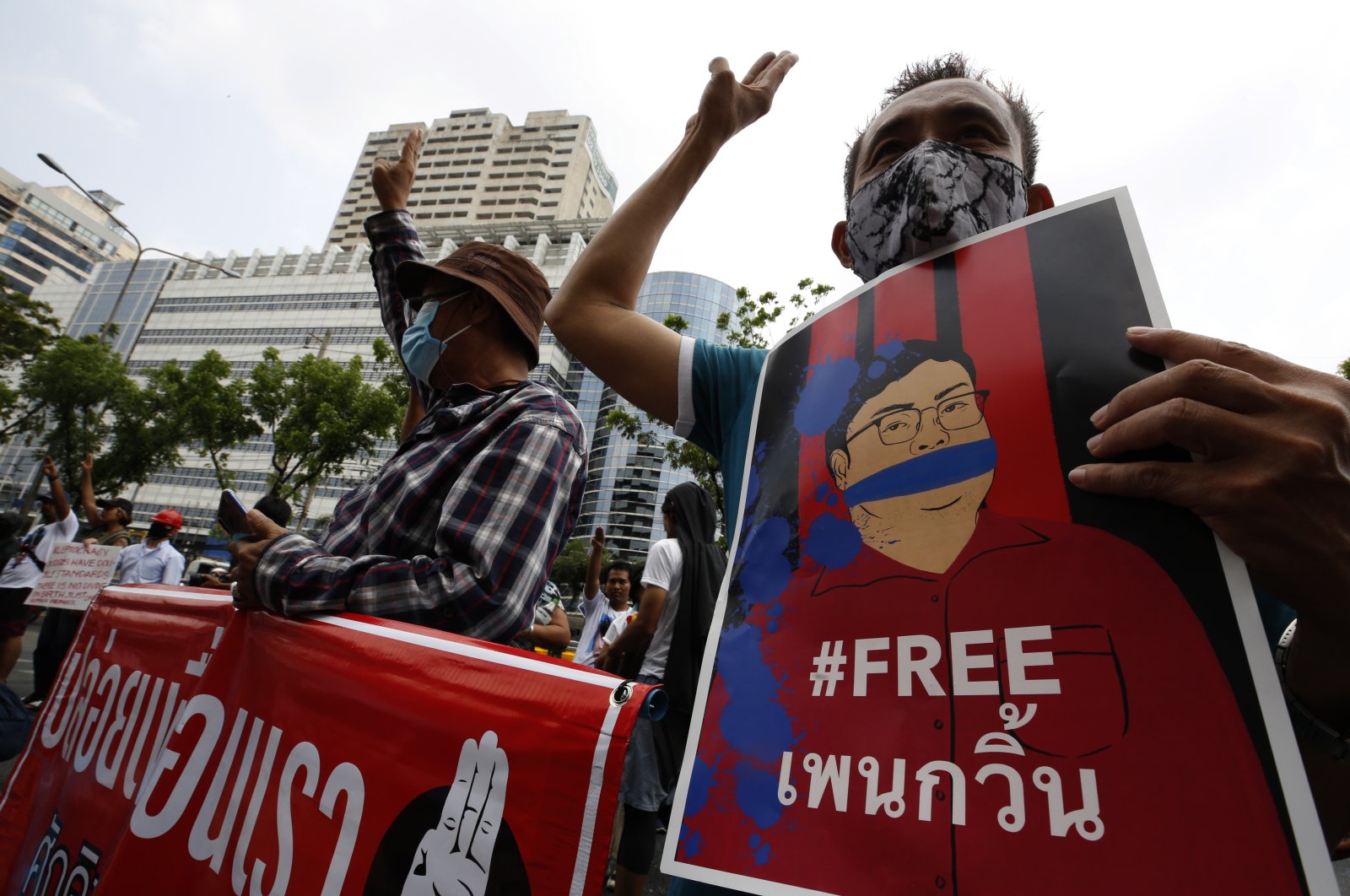 An anti-government protester holds a placard calling for the release of a jailed protest leader Parit Chiwarak as people gather in support of the protest leaders outside the criminal court in Bangkok, Thailand, March 8, 2021. (EPA Photo)
by Associated Press Mar 08, 2021 4:19 pm
RECOMMENDED

Three prominent Thai pro-democracy figures were denied bail in a Bangkok court Monday after being charged with insulting the monarchy, as the government escalated a legal row with a youth-led movement that emerged last year leading prosecutors to charge 15 pro-democracy activists with sedition.

The sedition charges, which carry a maximum penalty of up to seven years in prison, stem from an anti-government rally in September, though details on the alleged offenses were not immediately clear.

The three charged with violating the lese majeste law, which outlaws criticism of senior members of the royal family, are Panusaya Sithijirawattanakul, Jatupat Boonpattararaksa and Panupong Jadnok.

Thai authorities have stepped up their legal offensive against those involved in a student-led protest movement that is pushing for Prime Minister Prayuth Chan-ocha and his government to step down, the constitution to be amended to make it more democratic and the monarchy to be reformed to make it more accountable.

The latter demand is the most radical and controversial because the monarchy has rarely faced any public scrutiny and is considered by many to be an untouchable pillar of Thai identity. Those found guilty of violating the law against criticizing or insulting key royals face up to 15 years in prison per offense.

The protest movement has struck a chord with many Thais but alienated others, especially royalists shocked at its criticisms of the monarchy. The movement began to lose steam late last year amid differences among its factions, and because of a resurgence of COVID-19 in Thailand.

Prosecutors last month charged four protest leaders with lese majeste before they were denied bail. Jatupat, who was imprisoned for violating the lese majeste law in 2017, said that if he and the other activists charged Monday are unable to post bail they will keep fighting from jail.

"The movement outside will surely continue no matter what happens,” he said. Jatupat on Sunday completed a nearly 250-kilometer (155-mile) walk from Thailand's northeast to Bangkok's Democracy Monument.

Along the way, he campaigned and talked to people about ousting Prayuth, amending the constitution and abolishing the lese majeste law.

According to the group Thai Lawyers for Human Rights, at least 382 people, including 13 minors, have been charged in connection with the protests, which picked up momentum last summer.

At least 60 of those people have been charged with lese majeste.