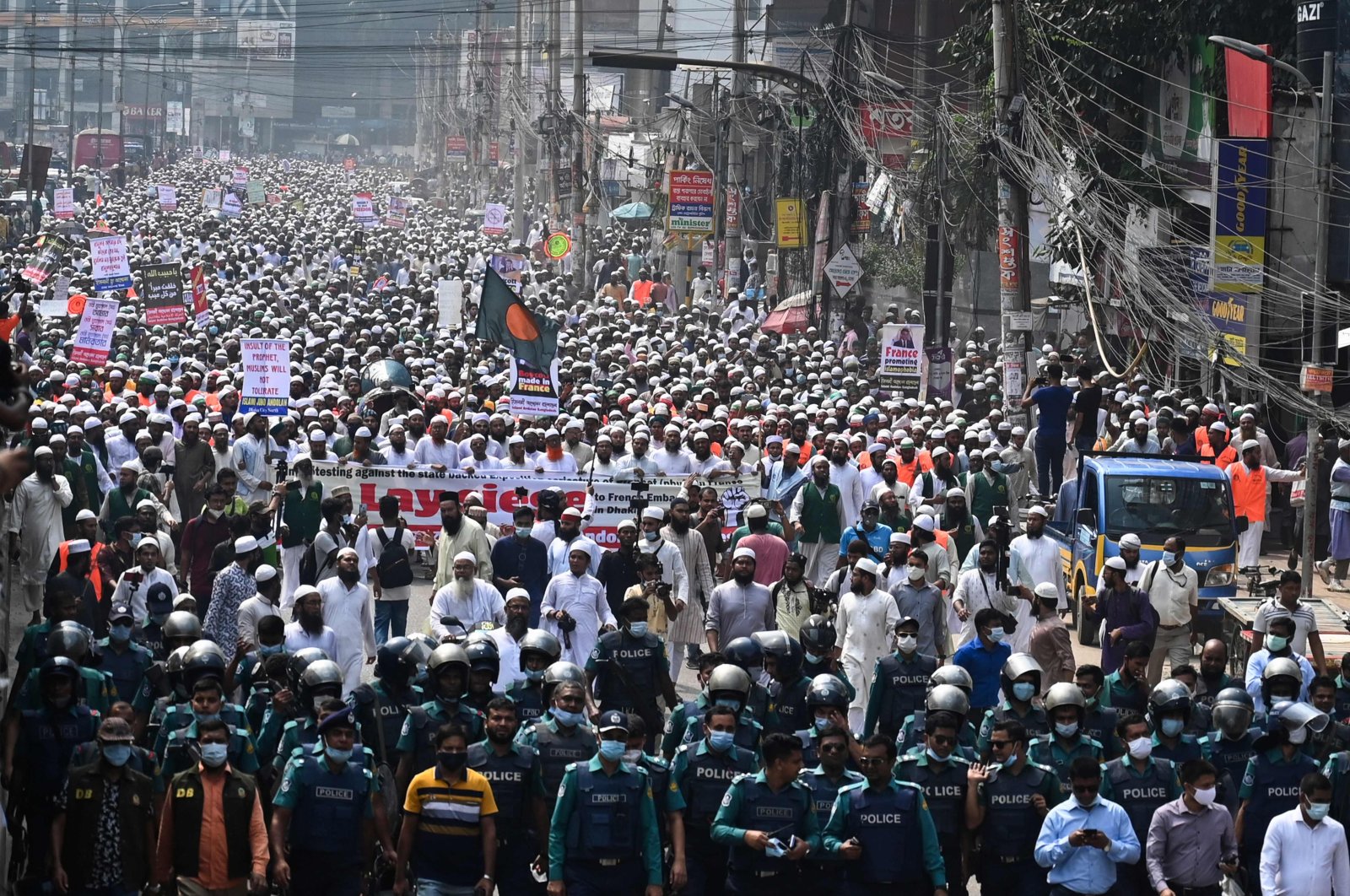 Protesters march to call for the boycott of French products and to denounce French president Emmanuel Macron for his comments over caricatures of the Prophet Muhammad in Dhaka, Bangladesh, Oct. 27, 2020. (AFP Photo)
by Agencies
Oct 27, 2020 1:45 pm

Around 10,000 people in Bangladesh rallied in the South Asian nation's capital on Tuesday to protest France's president and his staunch support of secular laws that deem caricatures depicting the Prophet Muhammad as acceptable.

Thousands of demonstrators carried banners and placards reading "all Muslims of the world, unite” and "Boycott France” as they launched a march toward the French Embassy in Dhaka to let their reservations about the remarks be known, calling on people to boycott French products.

It was the largest protest against the cartoons in recent days with some carrying portraits of French President Emmanuel Macron with an "X” on his face. One protester carried a cutout image of the French president with shoes around his neck as a sign of insult, according to The Associated Press (AP).

The issue has once again come to light in recent days following Macron's comments supporting the republication of blasphemous caricatures of the Prophet Muhammad.

The 2015 Charlie Hebdo caricatures resurfaced after a French teacher, Samuel Paty, was killed last week by a teenager of Chechen origin after he displayed the cartoons in his class on free speech. The attacker was shot dead by police.

Last Wednesday, Macron said he will not prevent the publishing of the cartoons under the pretext of freedom of speech sparking outrage among the Muslim world. While French Muslims have accused him of trying to repress their religion and legitimizing Islamophobia, several Muslim-majority countries as well as Turkey and Pakistan have condemned Macron's attitude toward Muslims and Islam, with President Recep Tayyip Erdoğan saying the French leader needs a "mental health check."

Elsewhere, Tehran summoned a French diplomat to protest Paris' stance on the caricatures. A report by state TV on Tuesday said an Iranian official in the country’s foreign ministry told the beaurocrat that Paris’ response in the aftermath of Paty's killing was "unwise" and that France was permitting hatred against Islam under the guise of support for freedom of expression. A powerful association of clerics in the Iranian city of Qom also urged the government to condemn Macron. Iranian hard-line newspaper Vatan-e Emrooz depicted the French president as the devil and called him Satan in a cartoon on its front page Tuesday.

Pakistan’s parliament passed a resolution condemning the publication of cartoons of the prophet. In Saudi Arabia, the country’s state-run Saudi Press Agency on Tuesday put out a statement from the foreign ministry saying the kingdom "rejects any attempt to link Islam and terrorism, and denounces the offensive cartoons of the prophet.” Saudi clerics have too condemned the caricatures, but have also cited the prophet’s "mercy, justice, tolerance.”

Qatar's Emir Sheikh Tamim bin Hamad Al Thani called on Muslims not to overreact. The Arab Gulf state of Qatar also condemned what it described as "the dramatic escalation of populist rhetoric” inciting religious abuse. In a statement, the government said inflammatory speech fuels calls for the repeated targeting of nearly 2 billion Muslims worldwide and the deliberate offense made by depicting the Prophet Muhammad has led to an increase in hostility towards Muslims.

Bangladeshi protesters gathered in front of the main Baitul Mokarram Mosque in downtown Dhaka Tuesday morning. The group walked toward the French Embassy but police intercepted the march, which ended without violence. Protests have also been held recently in Turkey and the Gaza Strip. Rezaul Karim, the head of the Andolon group in Bangladesh, called on France to refrain from displaying caricatures of the prophet.

"We, the Muslims, never did caricatures of other religious leaders," he said. "Macron and his associates did not learn anything from history,” he added, before calling on Muslims to boycott French goods.

Bangladesh, a nation of 160 million mostly Muslim people, is governed by a secular constitution. In the Middle East, Kuwaiti stores have pulled French yogurts, cheese and bottles of sparkling water from their shelves. Qatar University canceled its French culture week and calls to stay away from the French-owned Carrefour grocery store chain were trending on social media in Saudi Arabia and the United Arab Emirates (UAE).