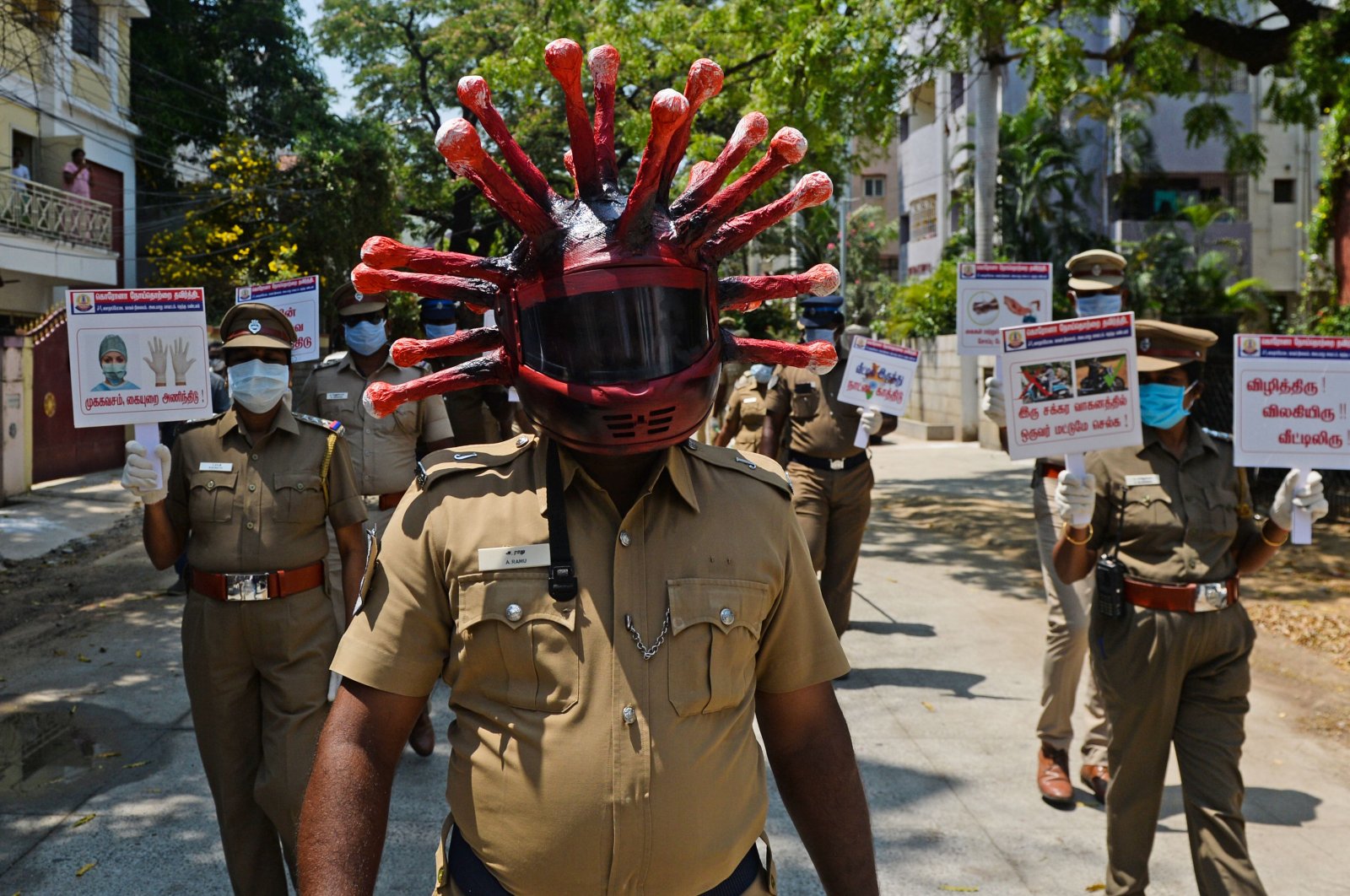 A policeman wearing a coronavirus helmet takes part with others in a procession to raise awareness about the COVID-19 coronavirus during a government-imposed nationwide lockdown, Chennai, Sunday, April 12, 2020. (AFP Photo)
by French Press Agency - AFP Apr 12, 2020 6:12 pm
RECOMMENDED

Ten foreigners who broke a coronavirus lockdown in an Indian town, made famous by the Beatles, were forced to repent by writing "I am so sorry" – 500 times, officials said Sunday.

The nationwide lockdown was imposed near the end of March, with residents permitted to leave their homes only for essential services such as buying groceries and medicine.

The travelers, from Israel, Mexico, Australia and Austria, were caught taking a walk in Rishikesh, where the Beatles sought spirituality at an Ashram in 1968.

Local police officer Vinod Sharma said they were each made to write "I did not follow the rules of lockdown so I am so sorry," 500 times.

More than 700 foreign tourists from the U.S., Australia, Mexico and Israel staying in the area had flouted the lockdown rules, Sharma said, adding the unusual punishment was handed out to teach them a lesson.

Police said they would direct hotels in the area to allow foreign guests to step out only if accompanied by local helpers.

Establishments that did not follow the order could face legal action, Sharma said.

Police have come up with unusual methods to encourage people to stay home to halt the spread of the deadly disease, including wearing coronavirus-shaped helmets.

But officers in some states were also seen in videos on social media beating drivers on roadsides and making people out and about during lockdown do squats and leapfrogs as punishment.

On Sunday, police said they arrested nine people violating the lockdown after an officer's hand was chopped off in northern Punjab state's Patiala district.

The group was stopped in a vehicle at a checkpoint and, refusing to turn back as ordered, hit the accelerator and smashed into steel barricades, officials said.

During the clash, one of the group pulled out a sword, slicing off a policeman's hand. Six more officers were injured in the attack, police said.

India's Prime Minister Narendra Modi is expected to extend a nationwide lockdown that was originally slated to end on Tuesday, for another two weeks.

Some states have already extended the restrictions.

On Sunday, India had registered more than 8,300 coronavirus cases and 273 deaths from the disease.