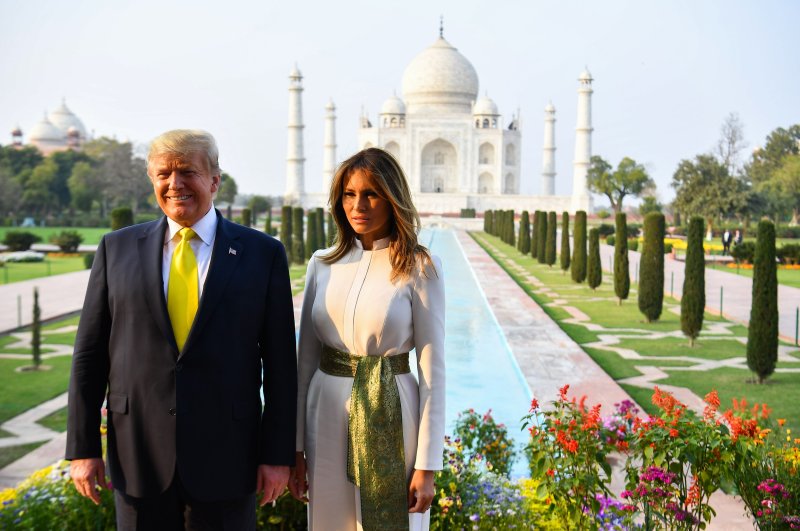 Trump and the U.S. first lady Melania, who arrived in India for a 36-hour trip, made a stopover at the city of Agra to visit the stunning white marble structure built in the 17th century by Mughal Emperor Shah Jahan as a mausoleum for his favorite queen, Mumtaz Mahal.

Trump and Melania posed for photographs against the backdrop of the Taj Mahal lit by the mellow evening sun and walked around the complex, accompanied by a guide who informed them of the monument's history and architecture. The couple was seen chatting with each other and occasionally holding hands.

The famous tombs at the Taj Mahal were given a special clay pack treatment in honor of Trump's visit. The presidential couple and their entourage had an exclusive encounter with the Taj Mahal, stray animals were rounded up days before and all other tourists, even those who had booked online months ahead, were barred from the popular site for six hours from noon, a police spokesman said.

The couple's visit may have been brief, but the Archaeological Survey of India which oversees the monument and the Agra city administration and police had been hard at work for weeks to ensure the VIP visitors had a smooth visit and saw the Taj Mahal at its best. "All stray animals in the area, cows, dogs and monkeys, were rounded up and removed," Agra Police spokesman Subhash Chand said.

Monkeys are known to occasionally attack visitors at the Taj Mahal.

Yellowing parts of the monument along with the graves of Mughal emperor Shah Jahan and Mumtaz Mahal were also cleaned up ahead of Trump's visit.