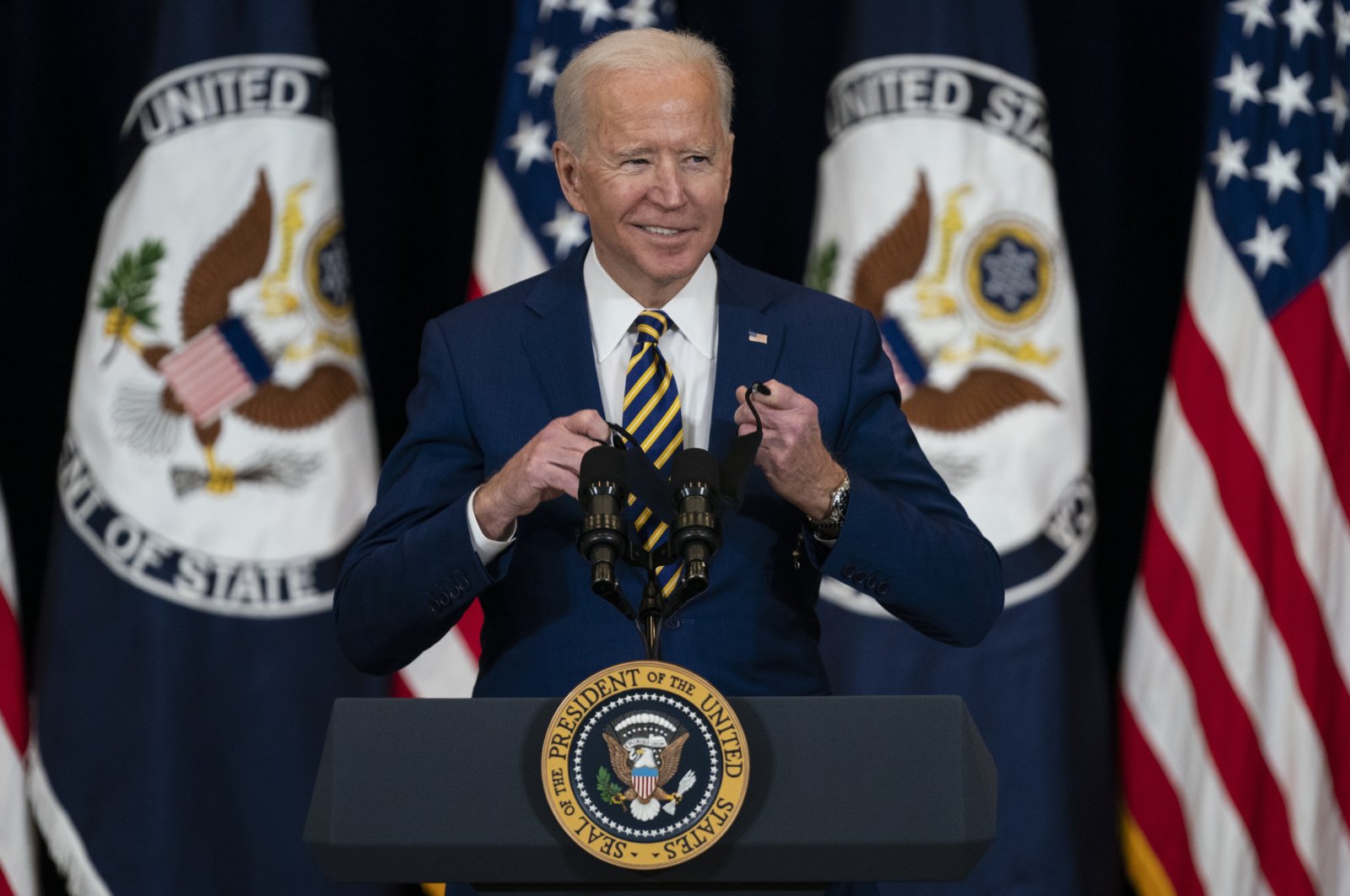 Since foreign policy was barely mentioned during the election campaign last year, all eyes are now fixed on the White House with new U.S. President Joe Biden implementing orders, ushering in a major reset in American foreign policy

U.S. President Joe Biden on Thursday made some harsh statements about Russia and his predecessor Donald Trump's political moves in Yemen and Germany in a speech meant to show a reinvigorated focus on diplomacy.

In his first major speech on foreign affairs as president, Biden said that the days of the U.S. “rolling over” to Russian President Vladimir Putin are over as he called for the immediate release of Russian opposition leader Alexei Navalny.

“I made it clear to President Putin, in a manner very different from my predecessor, that the days of the United States rolling over in the face of Russia’s aggressive actions – interfering with our election, cyberattacks, poisoning its citizens – are over,” Biden said during his first visit to the State Department, referring to phone call between the two leaders that took place last week. “We will not hesitate to raise the cost on Russia and defend our vital interests and our people.”

Biden issued his strongest condemnation of Putin as large protests have broken out throughout Russia following the jailing of Navalny. Police detained the 44-year-old Navalny at a Moscow airport on Jan. 17 as he arrived from Germany, where he had been recovering from exposure to a Soviet-designed nerve toxin. Thousands of anti-Putin protesters have been arrested across the nation.

The new American president also sought to signal to the world that he turned his back on Putin following Trump's administration, who avoided direct confrontation and often tried to play down the Russian leader's malicious actions.

Meanwhile, the Kremlin on Friday described comments made by the Democratic president as "aggressive, unconstructive rhetoric" and said it would not tolerate any U.S. ultimatums.

"This is very aggressive, unconstructive rhetoric, to our regret," Kremlin spokesperson Dmitry Peskov told reporters on Friday, adding that the Kremlin hoped, however, that there could still be useful dialogue between the two countries when their interests coincided.

Biden's comments on Russia came when he announced a wide-ranging reset of American foreign policy, including canceling Trump's order to withdraw American troops stationed in Germany. The Democratic president froze a drawdown of U.S. forces in Germany ordered by his predecessor as he directed Defense Secretary Lloyd Austin to conduct a global review of U.S. troops.

The withdrawal of U.S. forces from the European country was ordered by Trump amid frosty relations with Berlin, but nearly half of the 12,000 troops were to remain in Europe amid tensions with Russia. There are roughly 36,000 American troops stationed in Germany, and Trump said at the time the U.S. was being treated as "suckers" by keeping its forces in the country.

Biden said Austin would lead the review of U.S. forces stationed abroad in coordination with Secretary of State Antony Blinken to ensure "our military footprint is appropriately aligned with our foreign policy and national security priorities."

"It will be coordinated across all elements of our national security with Secretary Austin and Secretary Blinken working in close cooperation," Biden added.

During his visit in Washington, Biden also declared a halt to U.S. support for a Saudi Arabia-led military campaign in Yemen, demanding that the more than six-year war, widely seen as a proxy conflict between Saudi Arabia and Iran, "has to end." He also named veteran U.S. diplomat Timothy Lenderking as the U.S. special envoy for Yemen in a bid to step up American diplomacy "to end the war in Yemen, a war which has created a humanitarian and strategic catastrophe." The United Nations describes Yemen as the world's biggest humanitarian crisis, with 80% of its people in need and millions on the verge of a large-scale famine.

"This war has to end," the Democratic president said, according to remarks carried by Agence France-Presse (AFP). "And to underscore our commitment, we're ending all American support for offensive operations in the war in Yemen, including relevant arms sales."

"At the same time," he said on Thursday, "Saudi Arabia faces missile attacks, UAV (drone) strikes and other threats from Iranian-supplied forces in multiple countries. We're going to continue to support and help Saudi Arabia defend its sovereignty and its territorial integrity and its people."

Saudi Arabia welcomed Biden's remarks, particularly his commitment to the country's defense and addressing threats against it, according to the country's state news agency. The kingdom said on Friday Biden's speech reiterated U.S. commitment to work with "friends and allies" to resolves conflicts. The Saudi minister of state for foreign affairs, Adel Al-Jubeir, told state TV Ekhbaria that Riyadh is looking forward to working with the U.S. administration to end conflicts and face challenges.

The Saudi-led military coalition intervened in Yemen in 2015, backing government forces fighting the Iran-aligned Houthis. Riyadh's campaign against the Houthis has prompted a widespread humanitarian outcry amid repeated atrocities, including the 2016 targeting of a funeral in Sanaa, the rebel-controlled capital, that killed more than 100 victims. U.N. officials are trying to revive peace talks to end the war as the country's suffering is also worsened by an economic crisis, currency collapse and the COVID-19 pandemic.

Under the Trump administration, policy on Yemen was secondary to a so-called "maximum pressure" sanctions campaign against Iran in a bid to force Tehran back into talks over its nuclear and missile programs and activities in the Middle East.

This was despite demands by Republican and Democratic lawmakers for an end to U.S. support for Riyadh as the civilian death toll in Yemen mounted and the humanitarian crisis worsened.

Biden's national security adviser, Jake Sullivan, said earlier on Thursday that the end of U.S. support for the Saudi-led coalition's operations in Yemen does not extend to efforts to combat the regional affiliate of the al-Qaida militant group. Sullivan said the Biden administration already had halted two sales of precision-guided munitions and kept regional allies in the region informed of actions to avoid surprises.

"Any move that reduces the number of weapons, military activity, is to be welcomed and will give more space and more hope not only to the talks but importantly more hope to the people of Yemen," U.N. spokesperson Stephane Dujarric said Thursday.

The State Department is also reviewing a Trump administration designation last month of the Houthis as a foreign terrorist organization. The United Nations and aid groups have called for the designation to be reversed, warning it would push Yemen into a large-scale famine.

The Biden administration last week approved all transactions involving Yemen's Houthi movement for the next month as it carries out the review.

The Yemeni government welcomed Biden's decision on formally ending American support for the Saudi-led campaign in Yemen. In a statement, the Yemeni Foreign Ministry said the country's government was ready to work with the international community to establish a comprehensive and sustainable peace in the country. The Iran-backed Houthis in Yemen also saluted the U.S. president's remarks, saying the group "welcomes every effort by the U.S. to stop the war in Yemen and to lift the siege on the country."