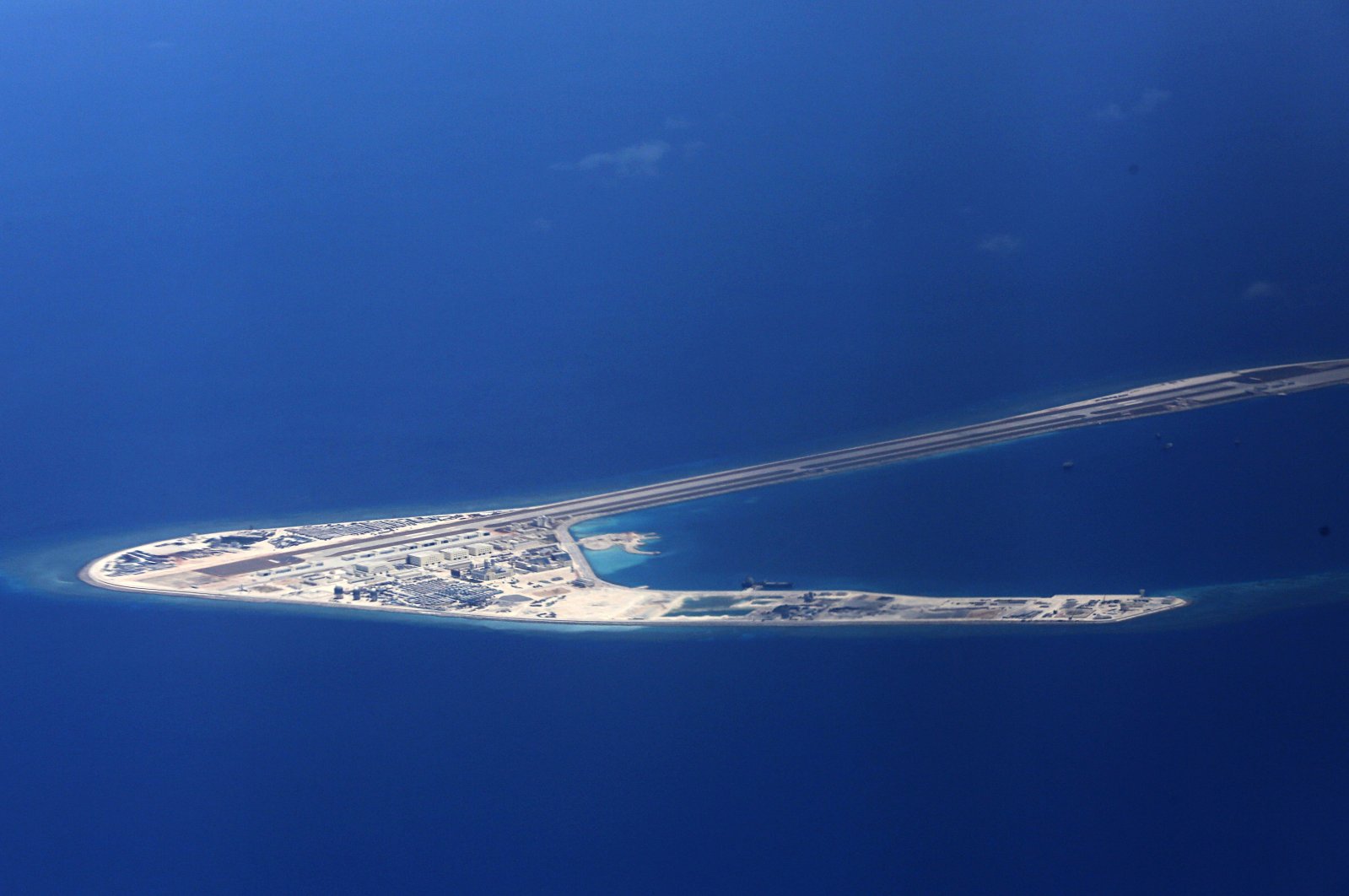 Chinese structures and an airstrip on the man-made Subi Reef at the Spratlys group of islands are seen from a Philippine Air Force C-130 transport plane off the disputed South China Sea in western Philippines, April 21, 2019. (AP Photo)
by ASSOCIATED PRESS Sep 28, 2020 2:13 pm
RECOMMENDED

U.S.-China friction flared again Monday, with Beijing firing back at accusations from Washington that it is a leading cause of global environmental damage and has reneged on its promise not to militarize the South China Sea.

A document issued last week by the State Department cited China’s record on issues from greenhouse gas emissions to air and water and soil pollution, illegal logging and wildlife trafficking.

"While the Chinese people have suffered the worst environmental impacts of its actions, Beijing also threatens the global economy and global health by unsustainably exploiting natural resources and exporting its willful disregard for the environment," the document said.

Department spokesperson Morgan Ortagus followed that with a statement Sunday saying China has "pursued a reckless and provocative militarization” of disputed outposts in the South China Sea’s Spratly Islands, adding that China’s ruling Communist Party "does not honor its words or commitments.”

Foreign ministry spokesperson Wang Wenbin responded Monday by asking why the United States was withdrawing from the Paris agreement on climate change, calling the U.S. the "biggest destroyer of international environmental cooperation."

Wang also said U.S. military actions have made it "the biggest threat to the peace and stability of the South China Sea."

The trading of accusations comes amid disputes over trade, technology, Hong Kong and Taiwan, spying accusations against Chinese diplomats and Beijing's assertions of territorial claims in the South China Sea and elsewhere that have driven the bilateral relationship to its lowest point in decades. The State Department's attack on China's environmental record follows China’s announcement to the United Nations General Assembly last week that it aims to have carbon dioxide emissions peak before 2030 and achieve carbon neutrality by 2060, a pledge that won applause from environmentalists.

The State Department cited China as "the largest emitter of greenhouse gases; the largest source of marine debris; the worst perpetrators of illegal, unreported, and unregulated fishing; and the world’s largest consumer of trafficked wildlife and timber products."

It singled out leader Xi Jinping's signature "Belt and Road" global infrastructure-building initiative as lacking "clear environmental guidelines, safety standards, and worker protections," and said China is saddling host countries with environmental burdens and leading them away from sustainable development.

"Tragically, the Chinese Communist Party represses civil society and a free press, slowing changes that would benefit its citizens and people all over the world," the State Department document said. Wang defended China's record on reducing pollution, touting China's promotion of new energy vehicles and the creation of new forest cover. The U.S. is the "greatest danger to the global environment," Wang told reporters at a daily briefing.

"We advise the U.S. side to stop political manipulation and malicious slander, and to do more practical work and less trouble for the global environment."

In her statement, Ortagus cited Xi's pledge during a 2015 visit to the White House that "China does not intend to pursue militarization" of the Spratly Islands. China's deployment of anti-ship cruise missiles and advanced surveillance capabilities on the islands, some of them man-made, and the construction of fighter jet hangars and runways showed that it is using such outposts as "platforms of coercion to assert control over waters to which Beijing has no lawful maritime claim," Ortagus said.

China claims virtually the entire South China Sea for itself and Wang said it was entitled to proceed as it saw fit on the islands, especially when it came to exercising its right to self-defense. Infrastructure on the islands also benefits the world, he said.

"The international community and regional countries must be highly vigilant and resolutely oppose the sinister plot of some U.S. warmongers to sow chaos in the South China Sea and East Asia," Wang said.