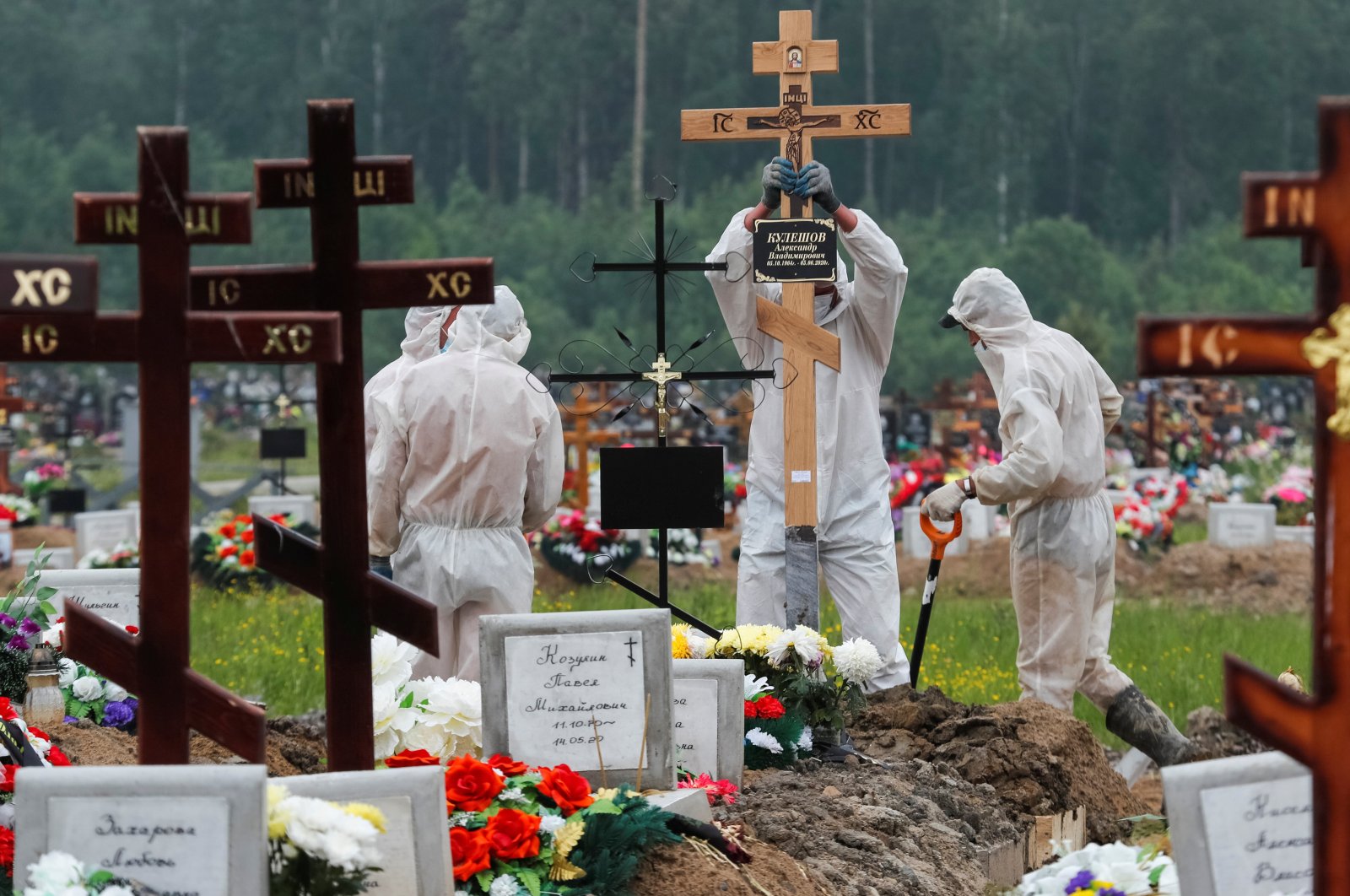 Grave diggers wearing personal protective equipment (PPE) bury a person, who presumably died of the coronavirus disease (COVID-19) in the special purpose section of a graveyard on the outskirts of Saint Petersburg, Russia on June 10, 2020. (Reuters Photo)
by French Press Agency - AFP Sep 10, 2020 11:15 am
RECOMMENDED

The global death toll from the coronavirus pandemic has topped 900,000 since the respiratory disease first appeared in China last year, according to an Agence France-Presse (AFP) tally.

As the fatalities climbed, U.S. President Donald Trump admitted he had tried to minimize the seriousness of the COVID-19 threat at the start of the pandemic, in audio recordings released Wednesday from interviews with veteran journalist Bob Woodward.

"I wanted to always play it down," Trump told Woodward on March 19, according to a CNN preview of the book "Rage," due to be published this month.

"I still like playing it down, because I don't want to create a panic," he said in the recorded conversation with Woodward.

There have been more than 27.7 million confirmed virus cases worldwide, according to an AFP count based on official statistics, with the worst-hit region Latin America and the Caribbean, followed by Europe.

The country with the most coronavirus deaths is the U.S. with over 190,000 fatalities, followed by Brazil.

With billions of people around the world still suffering from the fallout of the crisis, a worldwide race for a vaccine is underway, with nine companies already in late-stage Phase 3 trials.

However clinical trials on one of the most advanced experimental COVID-19 vaccines, which is being developed by pharmaceutical company AstraZeneca and Oxford University, were "paused" this week after a volunteer developed an unexplained illness.

Russia has already approved a vaccine and on Wednesday began inoculating volunteers in Moscow, the capital's deputy mayor said.

Russia announced last month that its vaccine, named "Sputnik V" – after the Soviet-era satellite that was the first launched into space in 1957 – had received approval.

Research published in The Lancet medical journal last week said patients involved in early tests in Russia developed antibodies with "no serious adverse events," although scientists cautioned the trials were too small.

Clinical trials of a Chinese-made vaccine in Brazil have shown "extremely positive" results, and a widespread vaccination campaign could begin as early as December, the governor of Sao Paulo state said.

AstraZeneca said it had "voluntarily paused vaccination to allow review of safety data," adding that in large-scale trials, illnesses will sometimes happen by chance, but must be reviewed independently.

Britain's health minister Matt Hancock said it was not the first pause in the trials of the AstraZeneca vaccine.

"It's a standard process in clinical trials. There was a pause earlier in the summer and that was resolved without a problem," he told Sky News.

China, meanwhile, put its homegrown vaccines on display for the first time at a Beijing trade fair this week, and authorities hope one will be approved for use by the end of the year.

The economic impact of the virus continues to wreak havoc on economies around the world, with governments desperate to get back to normality.

South Africa announced its economy had shrunk by more than half in the second quarter, as the epidemic took its toll on Africa's most industrialized state.

Latin America and the Caribbean surpassed 300,000 virus deaths. Argentina's caseload surpassed the half-million mark, while in Peru, which has the highest per capita coronavirus death rate in the world, fatalities climbed beyond 30,000.