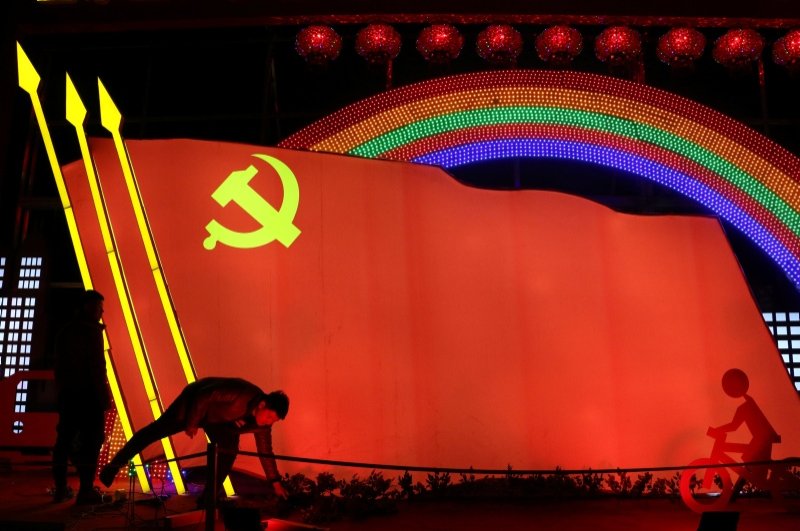 Men check on a light installation in a shape of the party flag of the Communist Party of China, that is set up to celebrate the upcoming Chinese Lunar New Year, in Jining, Shandong. (Reuters Photo)
by Associated Press Feb 24, 2020 7:25 pm
RECOMMENDED

China announced Monday it has postponed its most important political meetings of the year because of the outbreak of the new virus, a significant step for an authoritarian government that has always kept tight control over its political calendar.

The decision indicates the importance that President Xi Jinping places on the battle against the virus, which has killed more than 2,500 people and sickened more than 77,000 in mainland China.

The outbreak has posed one of the biggest political challenges to Xi’s administration since he took control of the ruling Communist Party in 2012. The annual meetings of the National People's Congress and its chief advisory body usually begin about March 5 and run for more than two weeks, bringing thousands of delegates to Beijing for discussions, speeches and political ceremonies.

The official Xinhua New Agency earlier noted that one-third of the 3,000 delegates are provincial and municipal-level cadres with important leadership roles working on the front line of the battle against the epidemic.

Xi has been wounded by the virus outbreak, but can minimize the damage by “moving aggressively to contain the damage and regain control by postponing" the meetings, said Steve Tsang, director of the China Institute at London’s School of Oriental and African Studies.

Because the National People's Congress has no real power, there is less reason to convene it when the party is restricting the movement of people and banning large gatherings, he said. Postponing the meetings will “reduce the risk of anyone using either occasion to speak out of line. Xi’s move is an aggressive defensive act, and thus more pragmatic than desperate, though he must have felt a need to be defensive," Tsang said.

China has severely restricted travel and imposed strict quarantine measures to stop the virus from spreading.

Dr. Bruce Aylward, an assistant director-general of the World Health Organization, said in Beijing on Monday that China’s actions had probably prevented tens of thousands and possibly hundreds of thousands of cases.

“There’s no question that China’s bold approach to the spread of this new respiratory pathogen has changed the course of what was a rapidly escalating and what continues to be a deadly epidemic,” he said.

“The single biggest lesson is speed,” he said. “Speed is everything. What worries me most is, has the rest of the world learned the lesson of speed?”