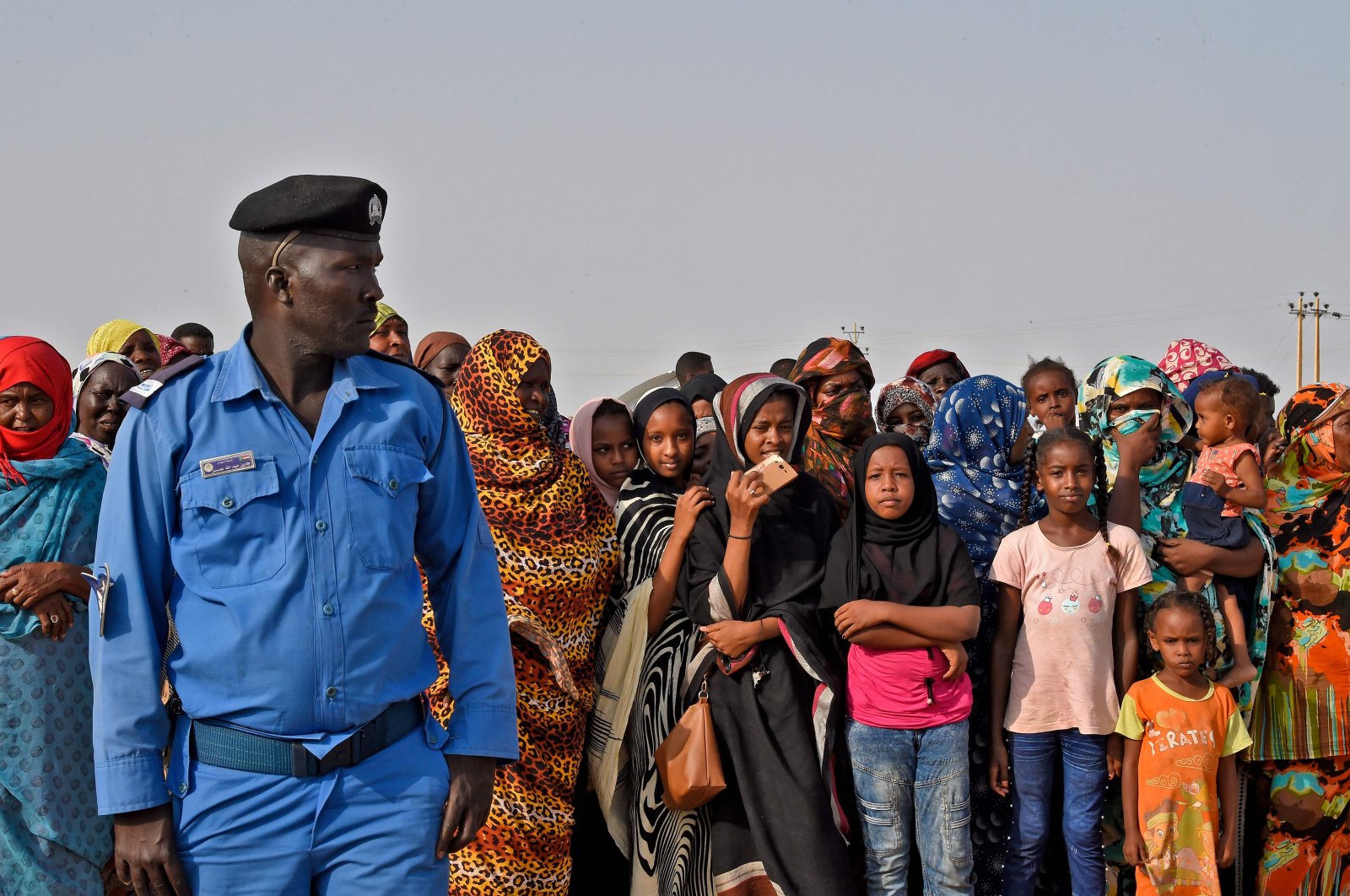 A policeman looks on while standing before displaced people at a shelter camp in the village of Tamaniyet, north of Sudan's capital Khartoum, Sept. 14, 2020. (AFP Photo)
by Agencies Sep 21, 2020 12:16 pm
RECOMMENDED

The coronavirus pandemic is having a "devastating" impact on people displaced and affected by conflict, tipping many into hunger and homelessness, a new study by the Norwegian Refugee Council (NRC) showed Monday.

The report, titled "Downward Spiral," is based on assessments and surveys in 14 countries, including Afghanistan, Iraq, Libya, Mali, Somalia and Yemen.

According to the NRC, nearly three-quarters of the 1,400 people surveyed said they had seen a clear deterioration in their conditions since the pandemic broke out.

For instance, 70% "had to cut the number of meals for their household," 77% had lost a job or income from work, and 73% said they were less likely to send their children to school due to "economic hardship."

"The world's most vulnerable communities are in a dangerous downward spiral," Jan Egeland, NRC secretary-general, said in a statement. "Already forced from their homes by violence, often with limited rights to work or access to government services, the economic impact of the pandemic is pushing them to catastrophe," he continued.

Even before the pandemic, the U.N. was concerned about worsening hunger in the world. According to an annual report published in July, nearly one in nine people were chronically undernourished in 2019, and things were expected to deteriorate in 2020 due to COVID-19.

Global coronavirus infections are rapidly approaching 31 million, with more than 958,000 deaths. The United States remains the hardest-hit nation in the world, with more than 6.8 million cases and deaths approaching 200,000. The country has lost almost 70 times more people to the pandemic than it lost in the Sept. 11, 2001 attacks, the anniversary of which the nation stopped to mourn earlier this month. By year's end, COVID-19 deaths could top 378,000, according to a projection from the Institute for Health Metrics and Evaluation at the University of Washington. That would be close to the number of American military deaths during World War II.

In poorer, crisis-hit parts of the world, the pandemic has piled on more suffering. Having weak health systems, an informal economy and no social distancing, many countries in Asia, Africa and Latin America have struggled to battle the health catastrophe. Latin America and the Caribbean have surpassed 8 million coronavirus cases.

Argentina's cases surpassed the half-million mark. Brazil, Peru, Mexico, Colombia and Argentina are among the top 10 countries with the most confirmed coronavirus cases. India now has over 5.4 million reported cases, and the nation of 1.3 billion people is expected to become the pandemic’s worst-hit country within weeks, surpassing the U.S.