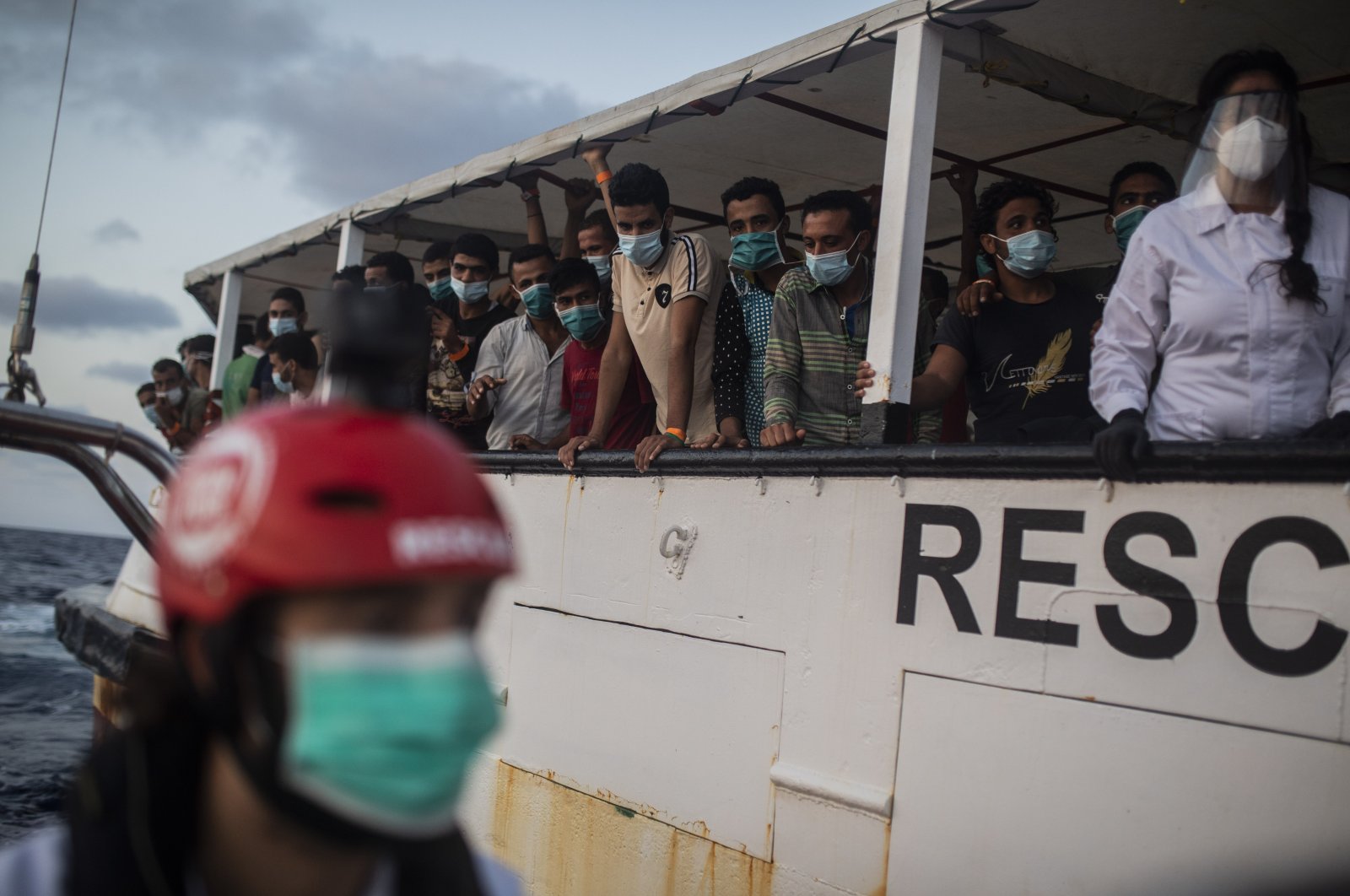 Migrants from different nationalities rest on board the Spanish NGO Open Arms vessel off the Mediterranean Sea on Sept. 9, 2020. (AP Photo)
by ASSOCIATED PRESS Sep 15, 2020 10:29 am
RECOMMENDED

The U.N. migration agency said Tuesday that a boat carrying migrants bound for Europe capsized in the Mediterranean Sea off Libya, leaving at least two dozen people drowned or missing and presumed dead, the latest shipwreck off the North African country.

Safa Msehli, a spokeswoman for the International Organization for Migration, told The Associated Press that Libya’s coast guard intercepted three boats on Monday, and one of them had capsized.

She said the coast guard retrieved two bodies, and survivors reported 22 others were missing and presumed dead.

At least 45 survivors on the three boats were returned to the shore. All migrants were men, with a majority from Egypt and Morocco, she said. Survivors and other intercepted migrants were taken to a detention center in the Libyan capital, Tripoli, Msehli said.

"This new tragedy signals yet again the need for increased search and rescue capacity in the Mediterranean. Instead, we are seeing restrictions on NGOs and long, unnecessary stand-offs,” Msehli said.

The shipwreck was the latest maritime disaster involving migrants seeking a better life in Europe. Msehli said last month more than 350 migrants died in the central Mediterranean this year.

In August, a boat carrying dozens of migrants capsized leaving at least 45 people drowned or missing and presumed dead, marking the largest number of fatalities in a single shipwreck off the coast of the North African country.

IOM’s Missing Migrants Project said that since mid-August, when four shipwrecks were reported in the central Mediterranean, 48 bodies have washed ashore at Libyan coasts. It said at least 54 other people may have died at sea in those tragedies.

Most migrants make the perilous journey in ill-equipped and unsafe rubber boats. The IOM said in March that its estimated death toll among migrants who tried to cross the Mediterranean passed the "grim milestone” of 20,000 deaths since 2014.

In recent years, the European Union has partnered with the coast guard and other Libyan forces to stop the flow of migrants and thousands have been intercepted at sea and returned to Libya.

The EU agreed earlier this year to end an anti-migrant smuggler operation involving only surveillance aircraft and instead deploy military ships to concentrate on upholding a widely flouted U.N. arms embargo that’s considered key to winding down Libya’s relentless war.