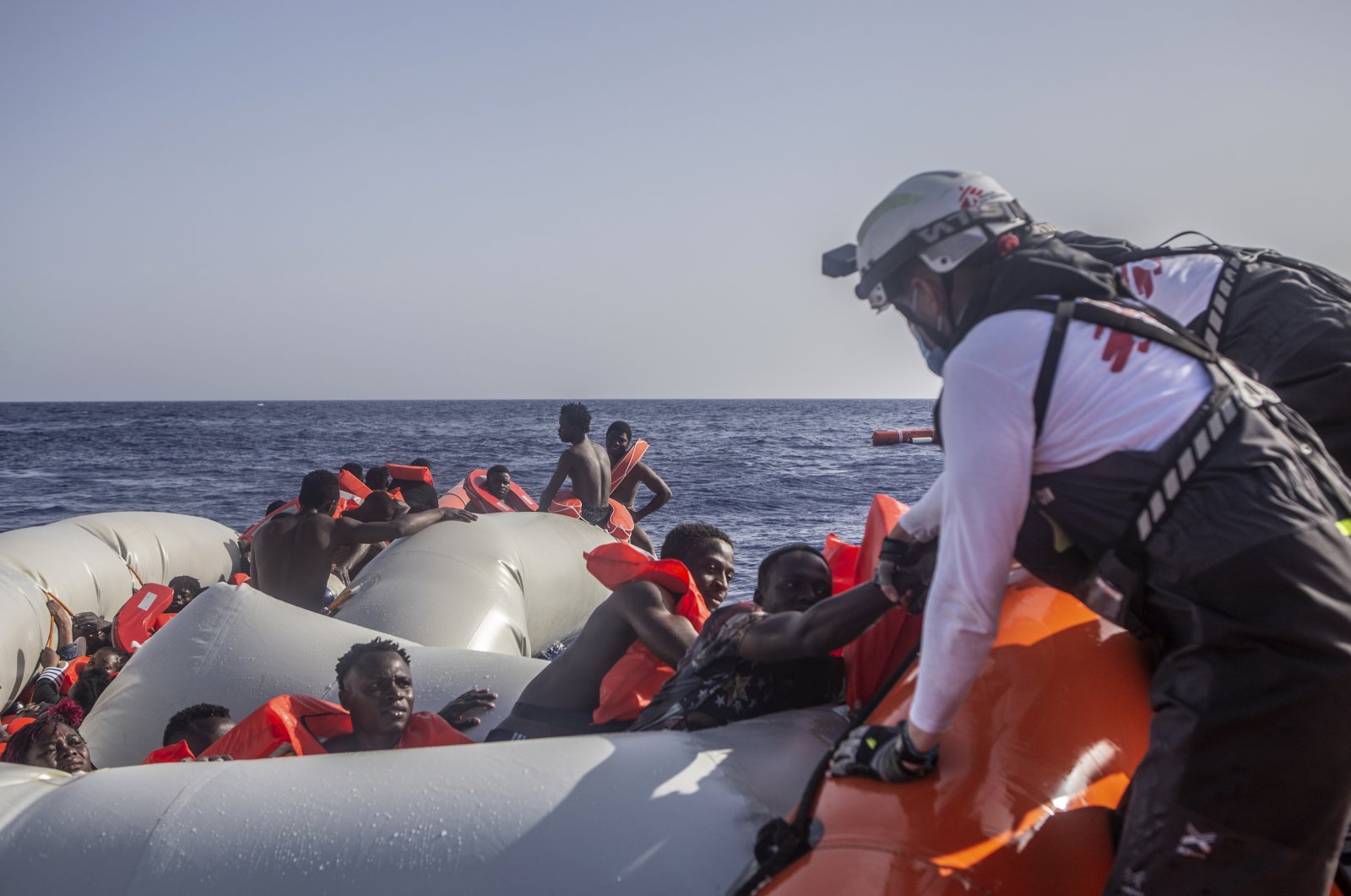 In this photo released by Doctors Without Borders (MSF) and taken on June 27, the MSF team rescues 71 people from a rubber boat in distress, Mediterranean Sea, June 29, 2022. (MSF via AP)
by Associated Press Jun 29, 2022 7:41 pm
RECOMMENDED

A rubber boat collapsed and sank in the Mediterranean Sea off Libya's coast, leaving at least 30 people, including women and children, missing and feared dead, an international charity said Wednesday. It marked the latest tragedy at sea involving migrants seeking refuge in Europe.

The vessel sank in the deadly central Mediterranean Sea route, said Doctors Without Borders, also known by its abbreviation MSF for the French name of the group.

A rescue ship operated by MSF reached the boat, and managed to rescue dozens of other migrants including some women, the charity said. A pregnant woman died on board the rescue ship, Geo Barents.

“We have seen so many people drowning – men, women and children – and we will never forget the day we had yesterday. We tried to save them but we couldn’t save them all," a 17-year-old boy from Cameroon said in a testimony posted by MSF on Twitter.

Libya has in recent years emerged as the dominant transit point for migrants fleeing war and poverty in Africa and the Middle East. The oil-rich country plunged into chaos following a NATO-backed uprising that toppled and killed longtime leader Moammar Gadhafi in 2011.

Human traffickers in recent years have benefited from the chaos in Libya, smuggling in migrants across the country’s lengthy borders with six nations. The migrants are then packed into ill-equipped rubber boats and set off on risky sea voyages.

Among the rescued migrants from Monday's boat sinking was a woman who lost her child in the sinking and another one who said she lost two children, the charity said. Three people on board needed emergency care, including a 4-month-old baby and they were evacuated to Malta. The infant was evacuated along with his mother, MSF said.

“The survivors are exhausted; many have ingested large amounts of seawater and multiple people suffered from hypothermia after spending many hours in the water,” said Stephanie Hofstetter, MSF medical team leader on board.

The charity has called for Italian and Maltese authorities to determine a port of safety to allow the disembarkation of survivors.

The loss of life is the latest tragedy at sea involving migrants trying to cross the Mediterranean from the North African nation in a desperate attempt to reach European shores.

“This is an example of what happens weekly, if not daily in the Central Mediterranean,” said Safa Msehli, a spokesperson for the International Organization for Migration. “The lack of active monitoring and search and rescue by State actors makes it extremely difficult for us to have the full picture.”

In recent years, the European Union has cooperated with Libyan authorities to prevent the crossings in policies criticized by rights groups.

Rights groups and U.N. agencies have for years documented systematic abuse of migrants in Libya including forced labor, beatings, rapes and torture. The abuse often accompanies efforts to extort money from families before migrants are allowed to leave Libya on traffickers’ boats.

Libyan authorities meanwhile said Wednesday they found the bodies of at least 20 migrants who died from thirst in the desert, 120 kilometers (around 75 miles) from the border with Chad.

The Ambulance and Emergency Authority in the southeastern city of Kufra said the migrants were on their way from Chad to Libya when their vehicle broke down, 310 kilometers south of the city.

It was not immediately clear when the vehicle broke down.