5 dead, 17 injured in terror attack near synagogue in Austria's Vienna 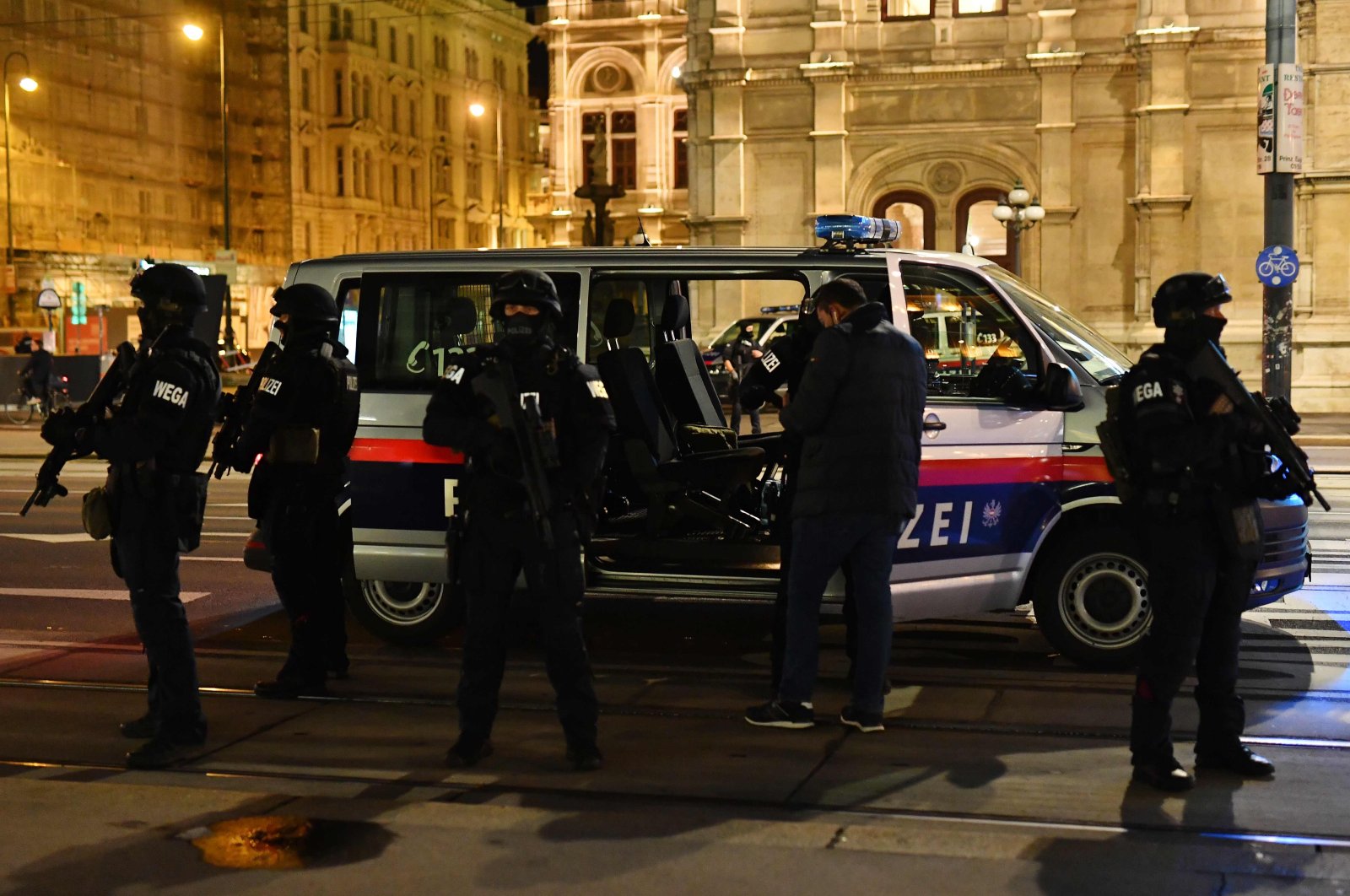 Armed police officers stand outside of a police vehicle near the State Opera in the center of Vienna following a terror attack, Nov. 2, 2020. (AFP Photo)
by agencies Nov 02, 2020 10:41 pm
RECOMMENDED

Austria's top security official says that five people have killed — including an assailant — and 17 people were wounded in a shooting in the heart of Vienna hours before a coronavirus lockdown was to start.

Interior Minister Karl Nehammer told reporters Tuesday that two men and two women have died from their injuries in the attack late Monday. A suspected attacker, who was carrying an assault rifle and a fake suicide vest, was also shot and killed by police. The 20-year-old gunman was born and raised in the city and was known to domestic intelligence because he was one of 90 Austrians who wanted to travel to Syria, a newspaper editor said on Tuesday. Kurtin S. had "Albanian roots," but his parents were originally from North Macedonia, the editor of the weekly Falter newspaper Florian Klenk said on Twitter, without giving details of the source for that information. Police thought he was not capable of planning an attack in Vienna, Klenk added.

A total of 17 victims of the attack are being treated at several hospitals, mainly for gunshot wounds and cuts, according to reports. The 10 patients with minor injuries are in shock.

"We are victims of a despicable terror attack in the federal capital that is still ongoing,” Austria's Chancellor Sebastian Kurz said hours after the gunfire erupted. "One of the perpetrators was neutralized, but several perpetrators appear to still be on the loose,” he said. "They seem to also, as far as we know, be very well equipped, with automatic weapons. So they were very well prepared."

Kurz praised police for killing one of the attackers and vowed: "We will not never allow ourselves to be intimidated by terrorism and will fight these attacks with all means."

Gunshots were fired at around 8:00 pm local time (7 p.m. GMT), beginning at the Seitenstettengasse in the city's centrally located first district. The shooting began just hours before Austria was to reimpose a coronavirus lockdown to try to slow the spread of COVID-19, and bars and restaurants were packed as people enjoyed a final night of relative freedom.

A bystander who asked not to be named told ORF that the shots had initially sounded like firecrackers. "Then you noticed that they were shots," he said. "He was firing wildly. Then the police came and started firing."

Other witnesses told another broadcaster, oe24, that they had heard at least 50 shots. It aired images of one injured person who was bleeding and being tended, video footage of a masked man firing off at least two shots as well as an image of a pool of blood in front of a restaurant.

In a statement, the Turkish Foreign Ministry condemned the terrorist attack, saying that the country stands in solidarity with the Austrian people.

"It is understood with grief that there are victims after a terror attack in Vienna," the MFA said in the statement.

"We strongly condemn the attack and express our condolences for the relatives of the victims, and wish a speedy recovery to the wounded. Turkey, which has been fighting against all types of terror for decades, is in solidarity with the Austrian people in these testing times," the ministry concluded.

U.S. President Donald Trump tweeted Monday night as he prepared for his final rally ahead of Election Day: “Our prayers are with the people of Vienna after yet another vile act of terrorism in Europe." “These evil attacks against innocent people must stop,” Trump added. "The U.S. stands with Austria, France, and all of Europe in the fight against terrorists, including radical Islamic terrorists.”

Austria's military has provided 75 soldiers to guard key sites in Vienna. Police officers have arrested 14 people linked to the main suspect in the Vienna attack, Interior Minister Karl Nehammer said at a news conference on Tuesday.

"There have been 18 raids in Vienna and Lower Austria and 14 people have been detained," Nehammer told a televised press conference.

He also said that the video material evaluated by the police "does not at this time show any evidence of a second attacker".

Germany and Hungary have offered to send tactical police units to support their Austrian colleagues. Some 1,000 police officers were in Vienna on Tuesday morning. Authorities say residents have uploaded 20,000 videos of the attack to police.