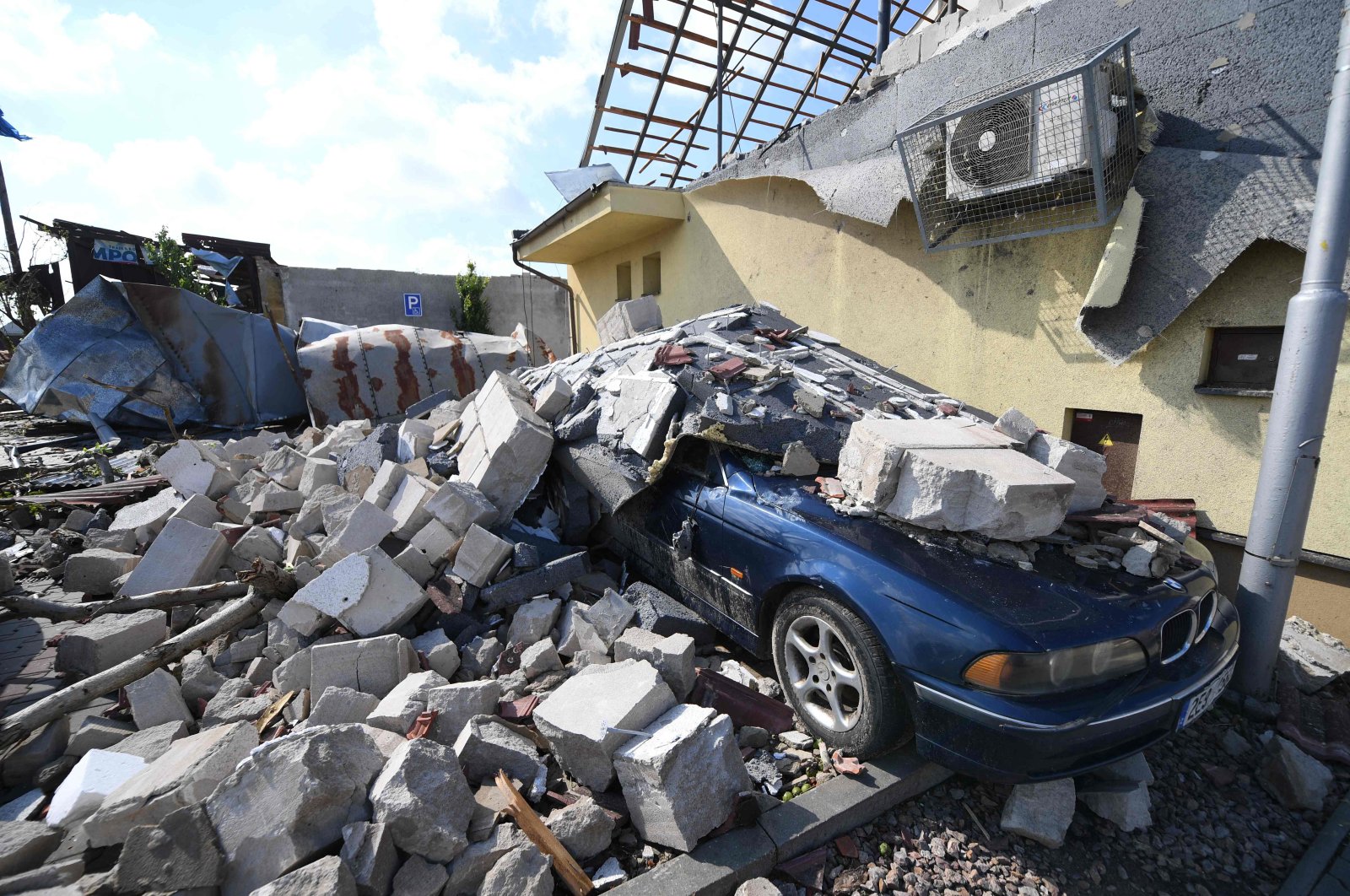 A car is consumed by the rubble of damaged houses after they were hit by a tornado, in the village of Moravska Nova Ves, some 60 kilometers (37 miles) south of Brno, South Moravia, Czech Republic, on June 25, 2021. (AFP Photo)
by French Press Agency - AFP Jun 25, 2021 3:21 pm
RECOMMENDED

A rare tornado has broken through several Czech villages and towns, killing at least five people and injuring dozens, rescuers said Friday while clearing up debris.

A retirement home and zoo were badly damaged after tennis-ball-sized hail battered a number of towns Thursday evening, causing extensive power outages and traffic disruptions after a major motorway was blocked.

Retirement home residents in Hodonin city were moved to a nearby hotel, the city said on its Facebook page, while about 78,000 homes and offices were without power on Friday morning. Video footage from the region on social networks showed destroyed buildings and cars, shorn tree stumps and several fires spewing thick black smoke. Vineyards in the wine-making region were heavily damaged, along with a chateau in the UNESCO-listed town of Valtice.

A local police spokesperson confirmed that five people had been killed, while 63 of the injured were taken to hospital, 10 in serious condition.

"There will be more," emergency services spokesperson Hedvika Kropackova told Agence France-Presse (AFP), noting that more injured people were calling for help on Friday. The army was also deployed to help with search efforts, aided by Austrian and Slovak rescuers. Firefighters and a special rescue team had searched "99%" of the affected villages, and did not expect to find further casualties, Grolich said.

Interior Minister Jan Hamacek said that more than 1,000 houses had been hit by the storm. Marek Babisz, the deputy mayor of the hard-hit village of Hrusky, told AFP that half of his village had been razed.

"A structural engineer and energy workers are now checking the worst-hit part of the village to determine which houses will be demolished and which ones can be saved," he said. A church in the area lost its belfry and roof to the tornado. Cleaning efforts are underway, with container trucks arriving and leaving full of debris.

"We are now trying to secure food and water for everyone so they could eat at least a bit," Babisz said. Slovak President Zuzana Caputova sent condolences and wished "great strength" to the affected Czechs on Facebook.

The storm forced Prime Minister Andrej Babis to remain in Brussels following an EU summit as a landing in Prague would have been too dangerous. In neighboring Poland, a twister also struck the southern Malopolska province on Thursday, damaging roofs and injuring one person, according to local media.

Tornadoes are rare in the Czech Republic, with the last notable one dating to 2004 when around 50 houses were damaged in the eastern town of Litovel.