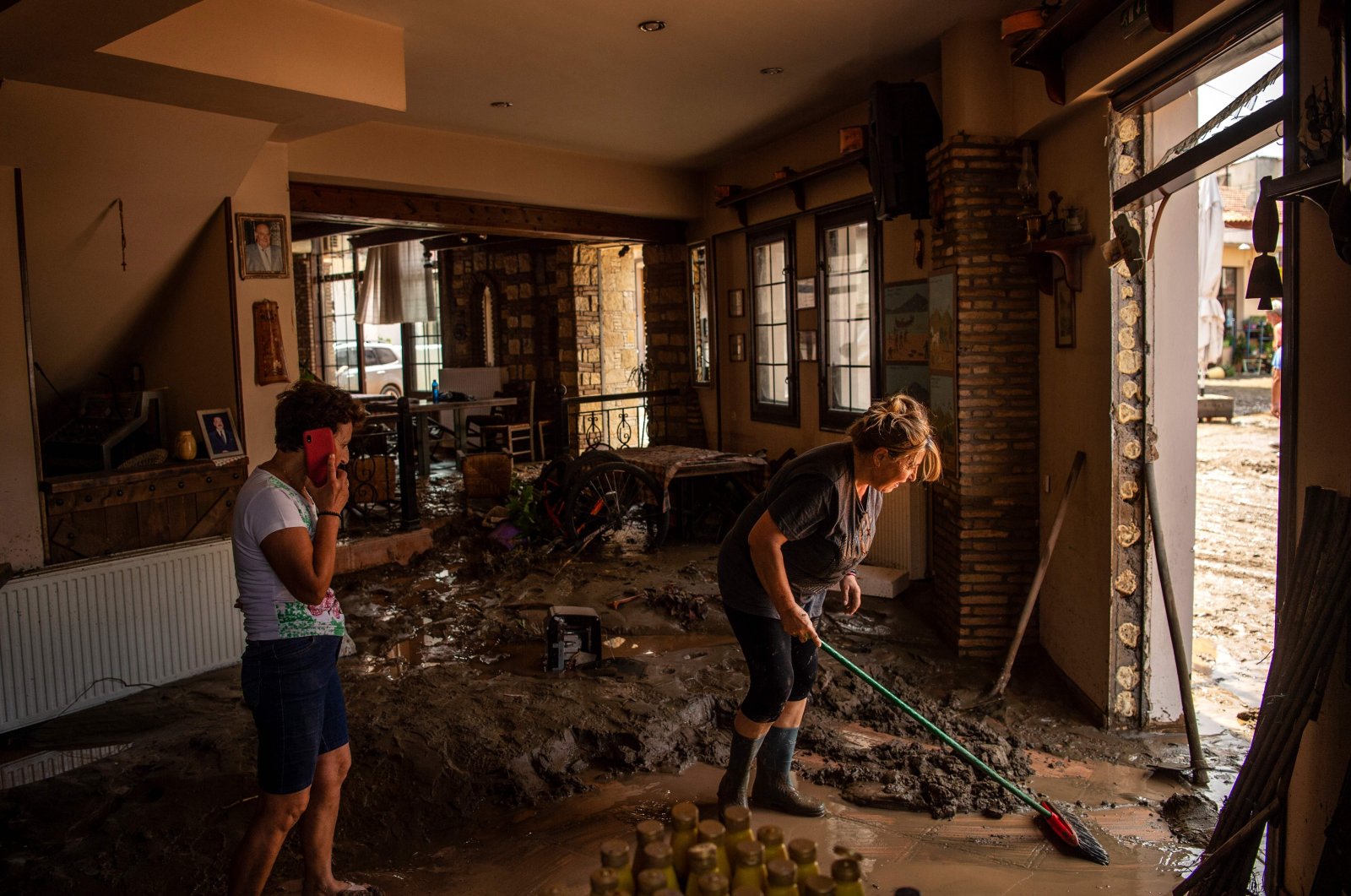 People try to move away water and mud from their shop, following a storm at the village of Politika, on Evia island, northeast of Athens, Greece, Aug. 9, 2020. (AFP Photo)
by Agencies Aug 09, 2020 7:56 pm
RECOMMENDED

Seven people, including an elderly couple and an 8-month-old baby, have been found dead as a storm hit the Greek island of Evia, authorities said Sunday. One person was still missing and dozens of others were trapped by floodwaters in their homes and cars.

Greece's meteorological service said parts of Evia saw rainfall that reached 300 millimeters (11.8 inches), some 80% of the annual rainfall for the area, which is only about 375 millimeters (14.8 inches), usually with negligible rain during the summer.

The 8-month-old baby was found dead in a house in the village of Politika on Sunday, a fire service spokesman said. The baby's parents were unharmed.

Hours earlier, a man and woman, both in their 80s, were found unconscious by firefighters in two houses in the same village, the spokesman said. They were confirmed as dead at the hospital.

Later, one of the missing, an elderly woman, was found floating at sea off the coast, sitting on top of a bureau. She had climbed on it just as the floodwaters burst into her house.
Firefighters later came upon the bodies of a 38-year-old woman and her 42-year-old husband outside their home in the inland village of Amfithea.

Two other people who died, a 74-year-old man and a 73-year-old woman, were from the village of Bourtsi, the agency reported.

Prime Minister Kyriakos Mitsotakis voiced his "profound pain for the loss of lives" and said he would visit Evia, Greece's second-largest island after Crete, on Monday.

A river burst through its banks and flooded part of Politika, forcing many residents to climb to the rooftops of their homes. Another river in the village of Bourtzi also burst its banks. Authorities estimated that 3,000 residences had been partially or totally damaged by floodwaters and police said many local roads are impassable.
Heavy rain started falling at about midnight Saturday and firefighters responded to over 50 fires caused by lightning. By late afternoon Sunday, 97 people had been safely evacuated from their homes and cars, 30 of them by helicopter, and over 600 homes had been drained of floodwaters, the fire service said.
Firefighters said they came upon hundreds of dead sparrows after trees were hit by lightning.

"We are experiencing a nightmare, we are using every possible means" to combat the floods, said Ana Fanis Spanos, a lawmaker from the central Greece region.

"Last year we had fires, this year it's floods," one resident of the village of Psachna told ERT television.

Flooded homes are a frequent occurrence in Greece due to a lack of adequate controls over construction and planning.

In November 2017, floods killed 24 people in Mandra, a village in an industrial region 30 kilometers (18.6 miles) west of Athens. Torrents of mud poured down over thousands of buildings, homes, shops and factories.