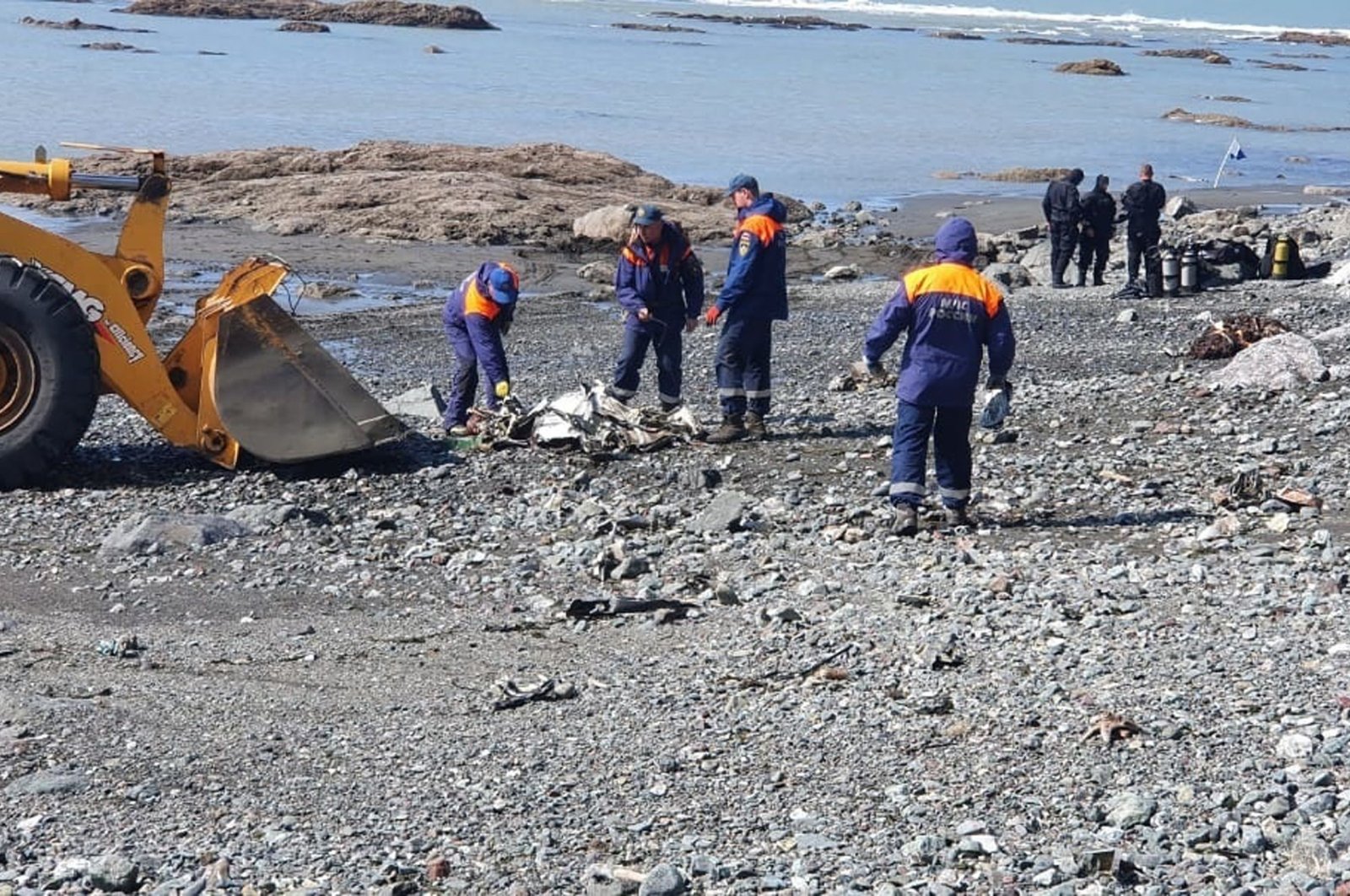 Emergency workers take part in the rescue operation at the spot where a Mi-8 helicopter crash-landed into Kuril Lake in the Kronotsky nature reserve on the Kamchatka peninsula, outside Petropavlovsk-Kamchatsky, Russia, Aug. 12, 2021. (Russian Emergency Situation Ministry via Reuters)
by French Press Agency - AFP Aug 12, 2021 10:17 am
RECOMMENDED

A helicopter carrying 16 tourists and crew on a volcano sightseeing trip in Russia's far east crashed into a lake on Thursday, leaving eight people feared dead and two others in serious condition, local officials said.

The Mi-8 helicopter crash-landed into Kuril Lake in the mountainous Kamchatka peninsula amid poor visibility and sank, Governor Vladimir Solodov said. Staff of the Kronotsky Nature Reserve saved half of the people on board, he added. "They approached the scene in a boat and saved eight people," Solodov said in a statement.

Two of the survivors were now in intensive care with various injuries. The other eight were feared dead, but their fate was not immediately confirmed. "We don't have any information about the rest," the spokesperson for the governor, Alla Golovan, told Agence France-Presse (AFP).

The helicopter was now lying at a depth of more than 130 meters (420 feet) some 800 meters from the shore, the governor said. More than 60 rescuers and divers were dispatched to the scene but they did not have the necessary equipment to begin work, authorities said.

"The divers of the emergencies ministry cannot work at such depth. So we turned to the defense ministry for help," Solodov said. "Robots will be studying the bottom of Kuril Lake at the site of the crash."

The Investigation Committee said it was looking into a potential violation of air safety rules. The tourists were from Saint Petersburg, Russia's second city. The helicopter was carrying them to Khodutka, a volcano near the city of Petropavlovsk-Kamchatsky.

The aircraft belongs to a firm called Vityaz-Aero, co-owned by a local lawmaker, Igor Redkin. Earlier this week, Redkin made headlines in Russia when he admitted to killing a man he mistook for a bear. Kamchatka is a vast peninsula popular with adventure tourists for its abundant wildlife, live volcanoes and black sand beaches. In July, an aircraft from a small local company crashed in the peninsula, killing 28 people.

Russia has historically had a poor reputation for air safety but has significantly improved its record since the 2000s. The country's major airlines have shifted from ageing Soviet aircraft to modern planes. But maintenance issues and lax compliance with safety rules have remained a problem.

In May 2019, an Aeroflot flight caught fire while making an emergency landing at Moscow's Sheremetyevo Airport, killing 41 people.