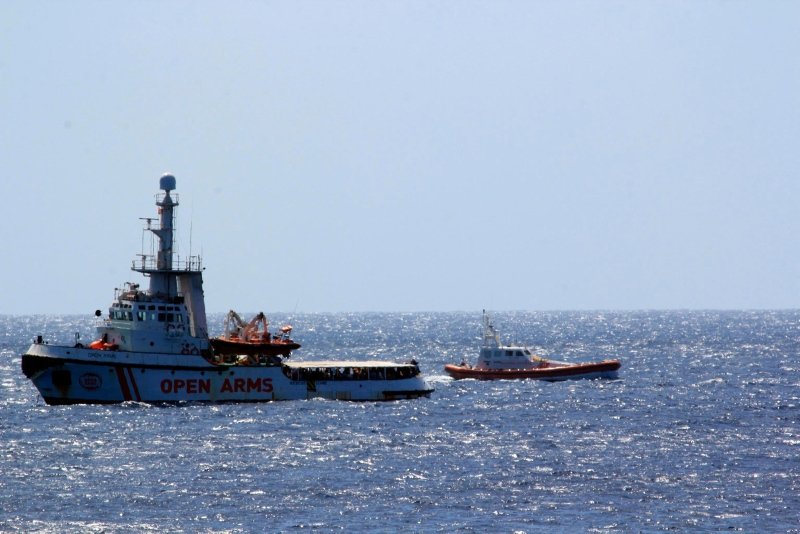 The Open Arms Spanish humanitarian boat with 147 migrants (L) is monitored by an Italian Coast guard vessel as it sails off the coasts of the Sicilian island of Lampedusa, southern Italy, Aug. 15, 2019. (AP)
by French Press Agency - AFP Nov 05, 2021 2:40 pm
RECOMMENDED

A charity ship carrying 800 migrants pleaded with Italy to assign it a safe port on Friday, as attempts to cross the Mediterranean intensified. The Italian Interior Minister Luciana Lamorgese called on the European Union for help.

"In just 48 hours, our crew has rescued over 800 people. Among the survivors are children, pregnant women and injured people," the German nongovernmental organization (NGO) Sea-Eye tweeted. "For all of them, the exceptional situation on board must be ended immediately. We need a safe haven!" it said in reference to the Sea-Eye 4 ship, which was headed toward the island of Sicily.

The vessel was already carrying around 400 people pulled to safety at sea when it raced to the rescue of another 400 people crowded onto a wooden boat Thursday.

Maltese rescue services responsible for maritime emergencies in the area "did not respond to any of the calls for assistance," Sea-Eye said.

Italy is one of the main points of entry into Europe for migrants from North Africa, mainly from Libya and Tunisia, with tens of thousands of people seeking to cross the Central Mediterranean Sea each year.

According to figures from the interior ministry, nearly 55,000 migrants have disembarked in Italy this year, compared to just under 30,000 last year.

Lamorgese met with European Justice Commissioner Didier Reynders in Rome on Thursday, telling him it was "unfair" that Italy should have to host all new arrivals, particularly in the wake of the pandemic.

"We need strong solidarity from Europe to allow the redistribution of migrants landing in Italy," she said.

Unlike between 2014 and 2017, when over 90% of migrants landing in Italy had set off from Libya, the arrivals are now "well distributed" between Libya and Tunisia, according to Matteo Villa from the Italian Institute for International Political Studies (ISPI).

He said that the highest number of migrants are coming in from Greece and Albania. The departures were driven by the coronavirus pandemic, economic recessions and political instability.