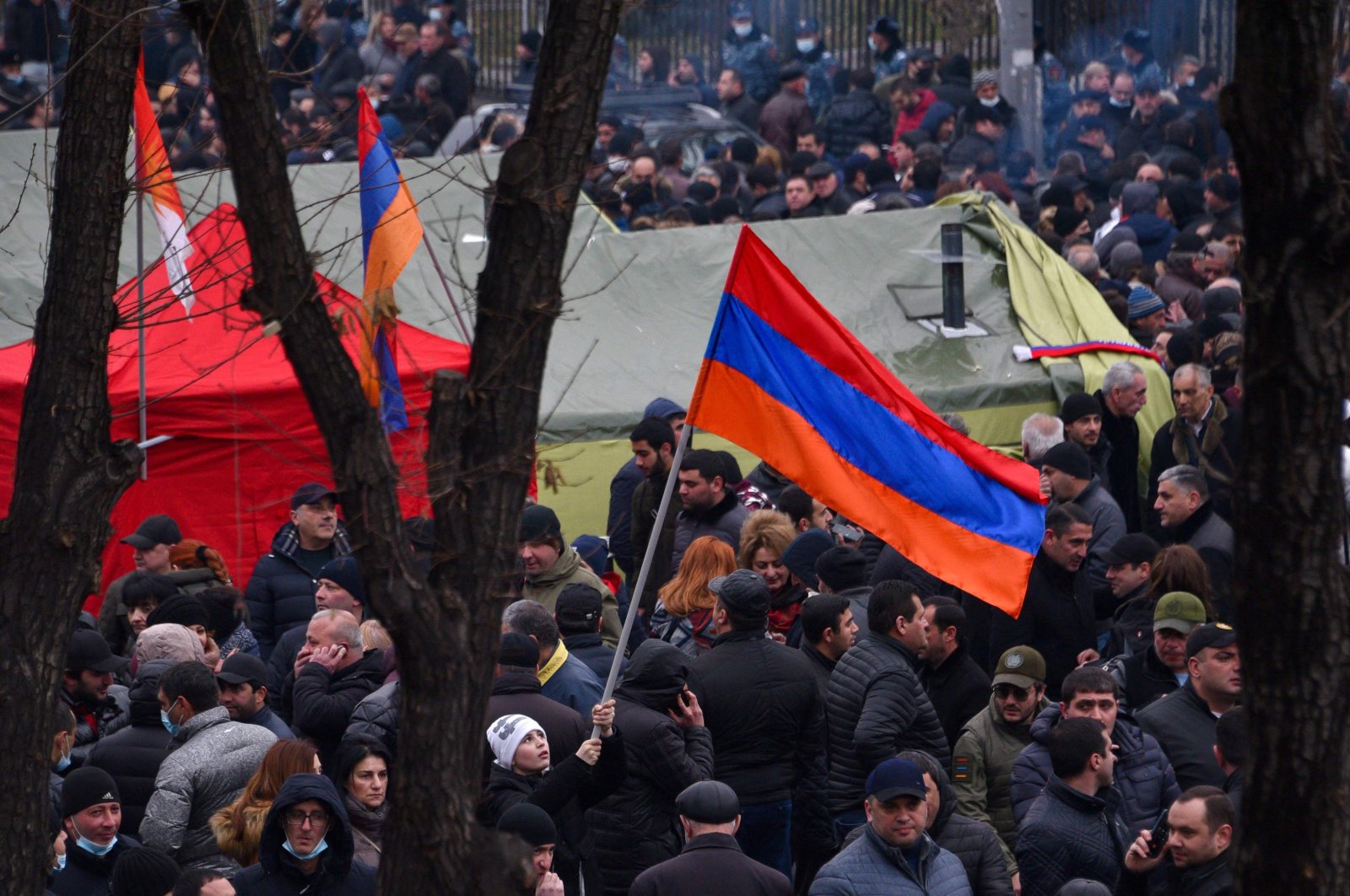 Armenian Prime Minister Nikol Pashinian said Monday that he was ready to call early elections to bring the country out of a political crisis that followed last year's war with Azerbaijan.

"Let's go to the polls and see whose resignation the people are demanding," said Pashinian, who swept to power after spearheading peaceful protests in 2018.

He admitted to making mistakes and asked for forgiveness, but denounced those he said were trying to undermine the country's democracy.

"Only the people can decide who will remain in power," said Pashinian, adding that old rivals are trying to undermine his government.

"We don't want the same old leaders to come back, we elected Pashinyan and we trust him," Narine Garibyan, a 59-year-old artist, told AFP at the rally.

"He is not guilty for what happened with the war. We are all guilty because we were silent all those years when the old leaders robbed the country and neglected the army."

Pashinian has faced opposition demands to resign since he signed a peace deal in November that ended six weeks of intense fighting with Azerbaijan over the Nagorno-Karabakh region. The Russia-brokered agreement saw Azerbaijan reclaim control over large parts of Nagorno-Karabakh and surrounding areas that had been occupied by Armenian forces for more than a quarter-century.

Opposition protests seeking Pashinian's ouster abated during the winter but intensified last week amid a rift between him and the country's military leaders.

The spat was sparked by Pashinian firing a deputy chief of the military's General Staff who had laughed off the prime minister's claim that only 10% of Russia-supplied Iskander missiles that Armenia used in the conflict exploded on impact.

The General Staff then demanded Pashinian’s resignation, and he responded by dismissing the General Staff chief, Col. Gen. Onik Gasparyan. The dismissal has yet to be approved by Armenia's largely ceremonial president, Armen Sarkissian, who sent it back to Pashinian, saying the move was unconstitutional.

Pashinian quickly resubmitted the demand for the general's ouster, and the prime minister's allies warned that the president could be impeached if he fails to endorse the move.

Sarkissian's office responded with a strongly worded statement condemning “inadmissible speculation” about his move and emphasizing that his decision was “unbiased and driven exclusively by national interests.”

Addressing a rally of his supporters, Pashinian voiced hope the president would endorse the dismissal of the General Staff’s chief for meddling in politics.

He blamed the country's former leader who lost power in the 2018 “velvet revolution” for influencing the military brass and trying to “set the army against the legitimately elected authorities and the people.”

Amid the escalating tensions, a group of protesters broke into a government building in central Yerevan earlier Monday to press for Pashinian's resignation, but they left shortly afterward without violence.

Pashinian, a 45-year-old former journalist who came to power after leading large street protests in 2018 that ousted his predecessor, still enjoys broad support despite the country's humiliating defeat in Nagorno-Karabakh and the opposition calls for his resignation.