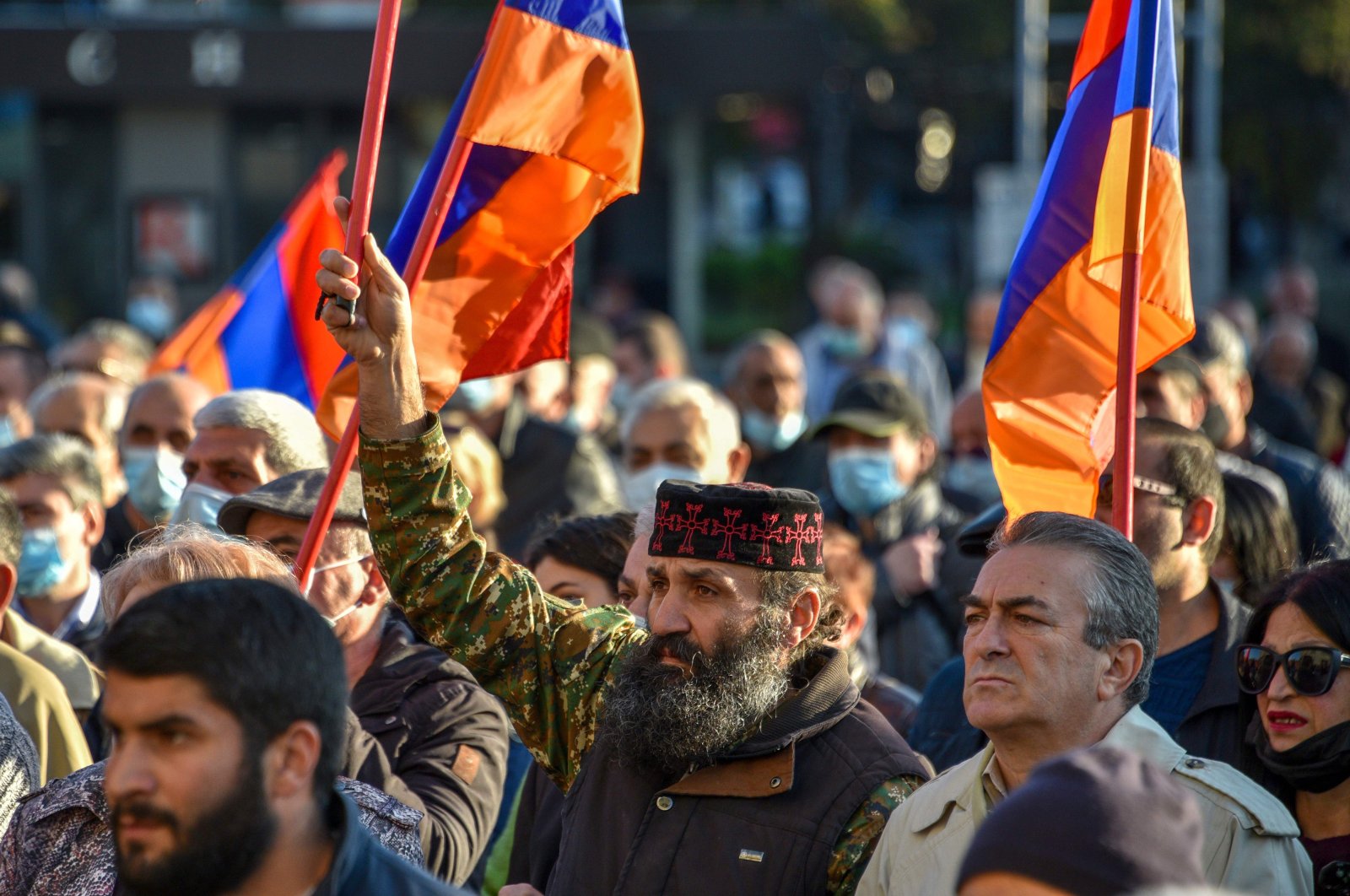 People protest during a rally against the country's agreement to end fighting with Azerbaijan over the Nagorno-Karabakh region in Yerevan, Armenia, Nov. 12, 2020. (AFP Photo)
by French Press Agency - AFP Nov 13, 2020 11:30 am
RECOMMENDED

Armenia on Thursday arrested 10 leading opposition figures for protesting against a Russian-brokered peace deal that ended weeks of fighting with Azerbaijan and sparked fury with Prime Minister Nikol Pashinian.

Prosecutors announced the arrests hours ahead of a fresh demonstration by the opposition against the accord that sees Armenia give up swathes of occupied territory in Nagorno-Karabakh to their long-standing foe.

More than 3,000 people converged on the streets of Yerevan Thursday evening, marching toward the state security service building, which was cordoned off by police, and shouting "Nikol the traitor" and "Nikol resign."

"Pashinian has sold our homeland and now is trying to stay in power," Naira Zoghrabyan, a deputy from the Prosperous Armenia party, shouted to the crowd.

"Nikol, resign peacefully while it's still possible," Zoghrabyan said at the protest, according to an Agence France-Presse (AFP) correspondent at the scene.

The 10 opposition politicians face up to a decade behind bars for their role in "illegal violent mass disorder," prosecutors said in a statement.

Protesters stormed and ransacked government buildings on Tuesday over Pashinian's agreement to end the fighting and took to the streets again in their thousands on Wednesday to demand the government resign.

Referring to the arrests of at least two of its members, Lilit Galstyan from the opposition Dashnaktsutyun party said, "We consider this to be an act of political persecution."

"This government has no moral right to stay in power," Galstyan added.

Pashinian earlier in the week accused the protesters who overran government buildings of being controlled by "oligarchs who were looting our army, our soldiers, our country for 20 years."

The 45-year-old former newspaper editor, who swept to power in 2018 promising to root out endemic corruption, denounced the demonstrators for stirring up unrest when security services were on the front lines.

But residents of Nagorno-Karabakh at the demonstration on Thursday said they were outraged by the peace deal, having been forced to seek refuge in Armenia due to the fighting.

"We lost our homes. Who will answer for this? We are in despair," said 39-year-old Siranush Sarkisyan at the protest in Yerevan.

Slavik Esayan, 58, who was also forced to flee his home as fighting raged between separatists and Azerbaijan, said he would not return to Nagorno-Karabakh while there were no security guarantees.

"The authorities of Armenia and Artsakh must be held responsible for this," he said, using the Armenian name for the occupied province of Azerbaijan.