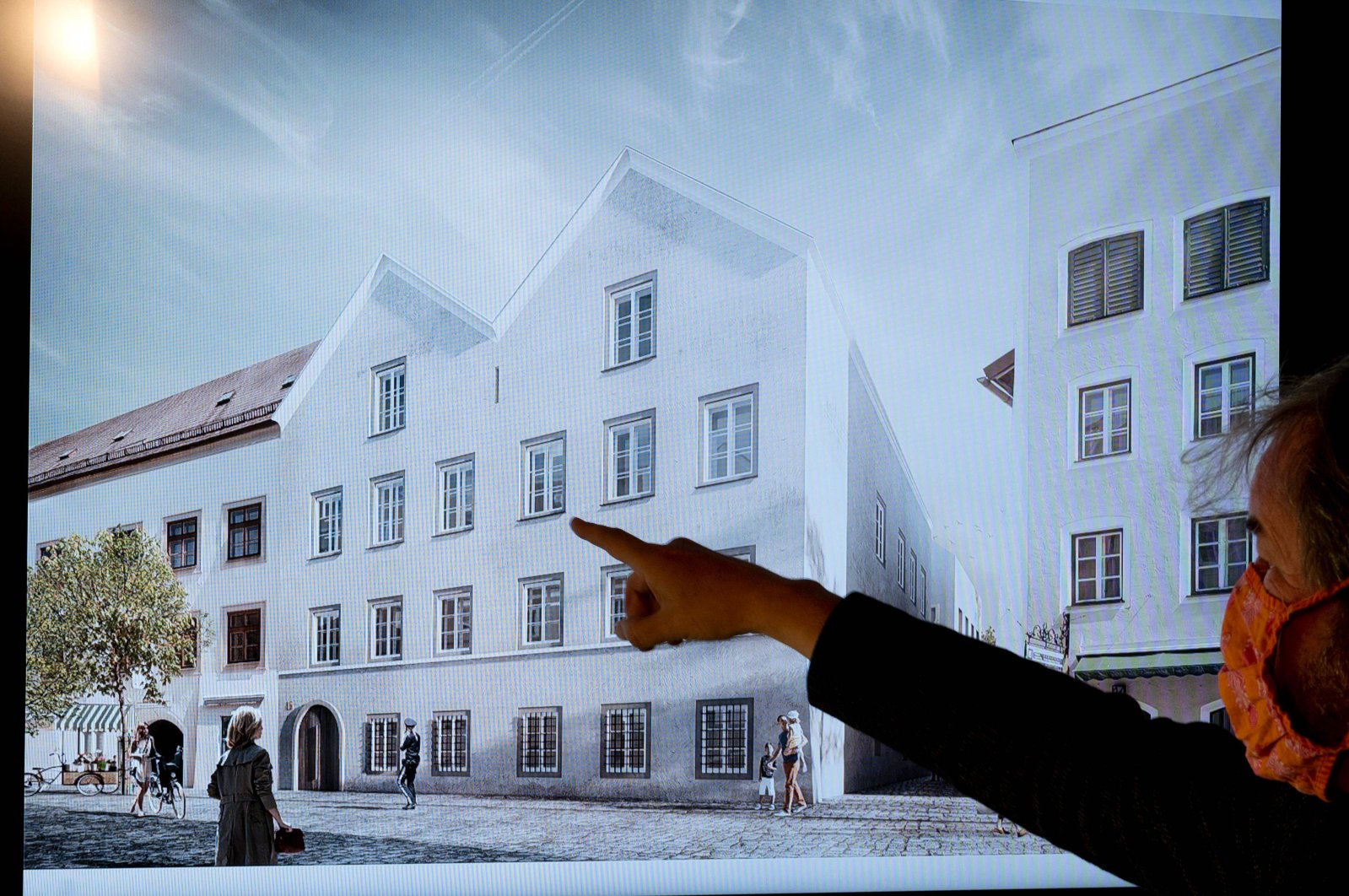 A man points his finger at a screen showing the chosen plan for the architectural redesign of Adolf Hitler's birth house, during a press conference at the Interior ministry in Vienna, Austria on June 2, 2020. (AFP Photo)
by French Press Agency - AFP Jun 02, 2020 4:18 pm
RECOMMENDED

Austrian officials unveiled Tuesday plans to "neutralize" Adolf Hitler's birth house by turning it into a police station, with the building receiving some cosmetic changes in the process.

The yellow corner house in the northern Austrian town of Braunau on the border with Germany, where Hitler was born on April 20, 1889, was taken into government control in 2016.

The building's fate was the subject of a lengthy legal battle with the house's owner, which only ended last year.

Austrian architecture firm Marte. Marte, run by two brothers, has been chosen from among 12 candidates to carry out the modifications to the property.

The government expects the work to cost some 5 million euros ($5.6 million) and be completed by early 2023.

"A new chapter will be opened for the future from the birth house of a dictator and mass murderer," Interior Minister Karl Nehammer said at a press conference announcing the plans.

Ministry official Hermann Feiner added that by adjusting the architecture and usage of the building the government aimed to "neutralize the entire premises."

Although Hitler only spent a short time at the property, it has continued to draw Nazi sympathizers from around the world.

Anti-fascist protesters have also organized rallies outside the building on Hitler's birthday.

Officials said Tuesday that the 800-square-meter (8,600-square-feet) property which also has several garages and parking spaces located behind the main building would get two pointed gables but that much of the original structure would remain intact.

A commemorative plaque outside the building will also be removed and may be exhibited in a museum.

Austria's highest court ruled last year that Gerlinde Pommer, whose family has owned the house for nearly a century, was entitled to some 810,000 euros in compensation, ending a lengthy legal battle. Pommer had been renting the property to the interior ministry since the 1970s. The government paid her around 4,800 euros a month to use the building as a center for those with disabilities.

But this arrangement fell apart in 2011 when Pommer refused to carry out essential renovation work, while also declining to sell. Since then, the building has lain empty.

At one point, the interior ministry was pushing to have the building torn down, but these plans faced angry resistance from politicians and historians.

Germany annexed Austria in 1938, and although many top henchmen from Hitler downwards were Austrians, historians say the small Alpine country has been slow to acknowledge its shared responsibility for the Holocaust and the other crimes inflicted by the Nazis.