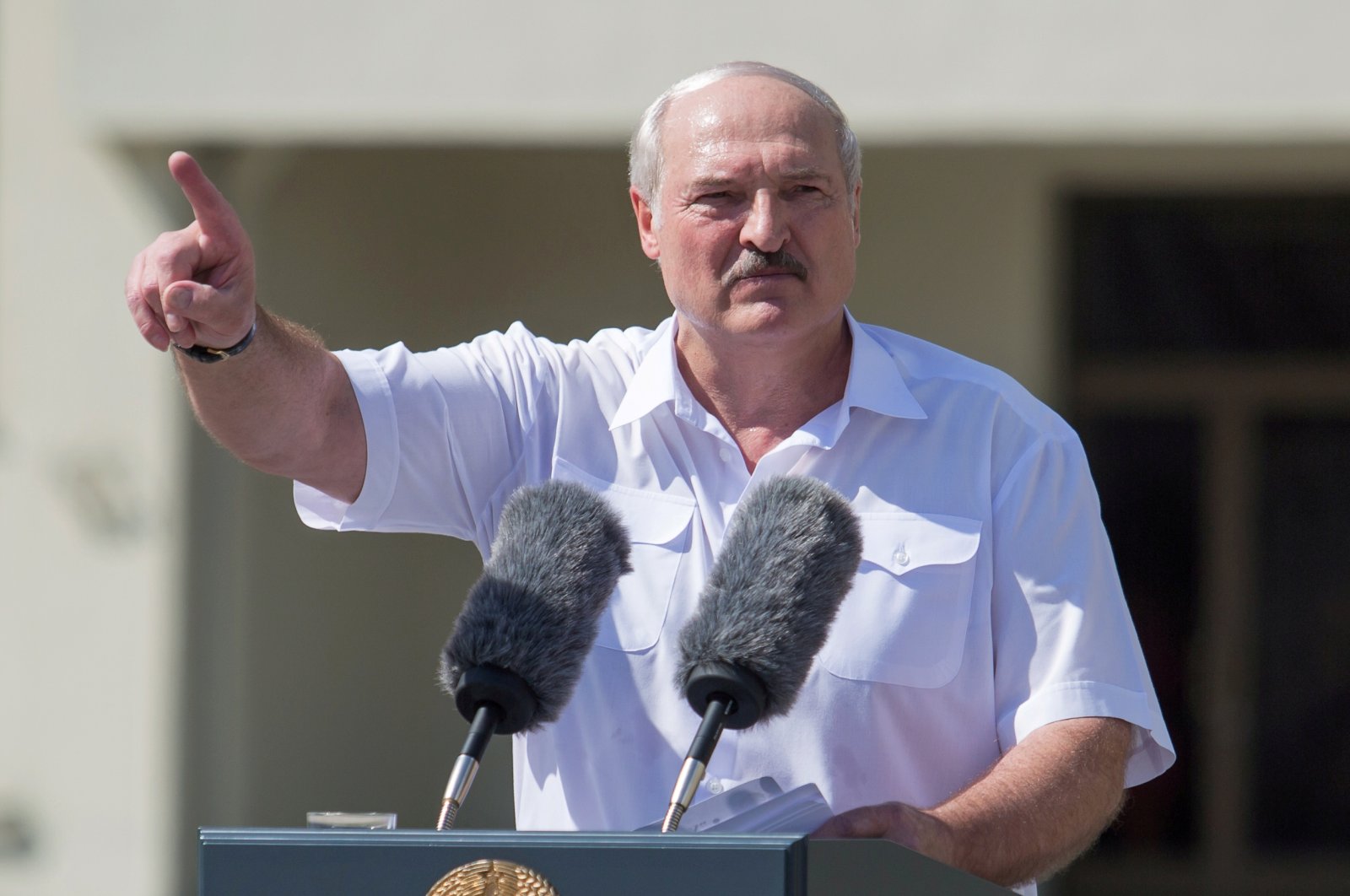 Belarusian President Alexander Lukashenko gestures as he delivers a speech during a rally of his supporters, in the capital Minsk, Aug. 16, 2020. (REUTERS Photo)
by German Press Agency - DPA Aug 17, 2020 5:21 pm
RECOMMENDED

Belarus President Alexander Lukashenko suggested on Monday that the country could hold a new election after a referendum to adopt a new constitution.

Attempting to quell a protest movement that erupted following a widely disputed presidential election, Lukashenko assured a crowd of striking factory workers that a new election would be possible, provided that a constitutional referendum was conducted first.

"In accordance with the new constitution, we can conduct elections if you want, for the parliament, for the president, for the municipal authorities," Lukashenko told the workers, standing among the crowd with security forces closely nearby, according to a video released by state television.

Lukashenko said he is prepared to relinquish some of his authority through constitutional change. He noted that the change would come "not under pressure and not through the streets," according to an official transcript.

He suggested that such amendments could be put to a referendum with input from the political opposition. "Come, sit down and let's work on the constitution. We'll put it to a referendum."

Lukashenko abruptly ended the speech, at the MZKT truck factory, as a crowd of striking workers chanted "Get out," according to a video of the scene.

That slogan, a call for Lukashenko to resign, has become a rallying cry for protesters throughout the country since the Aug. 9 election that officials say gave Lukashenko a sixth consecutive term.

His speech was drowned out by the chant, but before leaving the podium Lukashenko said: "Thank you, I've said everything. Now you can yell, 'Get out.'"

Protesters allege that authorities rigged the results of last week's election to give Lukashenko a landslide victory with more than 80% of votes.

Lukashenko, 65, has led the former Soviet republic in Eastern Europe, between Russia and European Union member state Poland, for a quarter of a century, tolerating little dissent. Police have responded to the recent protests with a violent crackdown.

Rejecting calls for a revote, Lukashenko said in Monday's speech that "no one should ever expect to pressure me into doing something," according to the official transcript.

A leading independent news source in Belarus, Tut.by, quoted Lukashenko as saying at the event: "Unless you kill me, there will not be a revote."

The EU has condemned the election as "neither free nor fair."

The head of the European Council scheduled an emergency leaders summit on Wednesday to discuss the crisis.

"The people of Belarus have the right to decide on their future and freely elect their leader," European Council President Charles Michel said in a statement on Twitter. "Violence against protesters is unacceptable and cannot be allowed."

Thousands of Belarusian protesters have been detained, with many of those released saying they had been mistreated or even tortured while in custody.

"The sheer numbers clearly show that the Belarusian population wants change, and wants it now. The EU stands by them," EU foreign policy chief Josep Borrell said in the statement.

The runner-up in the election, according to the disputed official tally, Svetlana Tikhanovskaya, has said that she is ready to assume a role as "leader of the nation" until a revote to confirm that she had won the election.

Tikhanovskaya, who has fled Belarus for EU member state Lithuania amid the police crackdown, said in a video address released on Sunday that preparations were underway to establish a legal basis for enabling a revote.

Tikhanovskaya, 37, is a former foreign language teacher who became a candidate after her husband, Sergei Tikhanovsky, an activist blogger who had hoped to run against Lukashenko, was jailed in the run-up to the election.

Another prominent potential candidate, former banking magnate Viktor Babariko, was jailed during the registration process. Yet another challenger, Valery Tsepkalo, a former ambassador to the US, fled to neighboring Russia after a tip-off that he too would be arrested.

Lukashenko has described the protesters as "sheep" being led by foreign influencers. He said in a speech on Sunday that the Western military alliance NATO had been amassing troops near the Belarusian border.

Meanwhile, the Belarusian military has announced that it will conduct massive war exercises near the border of NATO member state Lithuania from Monday to Thursday.

Russia, Belarus' closest ally, has pledged to support the Belarusian military if needed, condemning "pressure from outside" following the election, according to a Kremlin statement on Sunday.