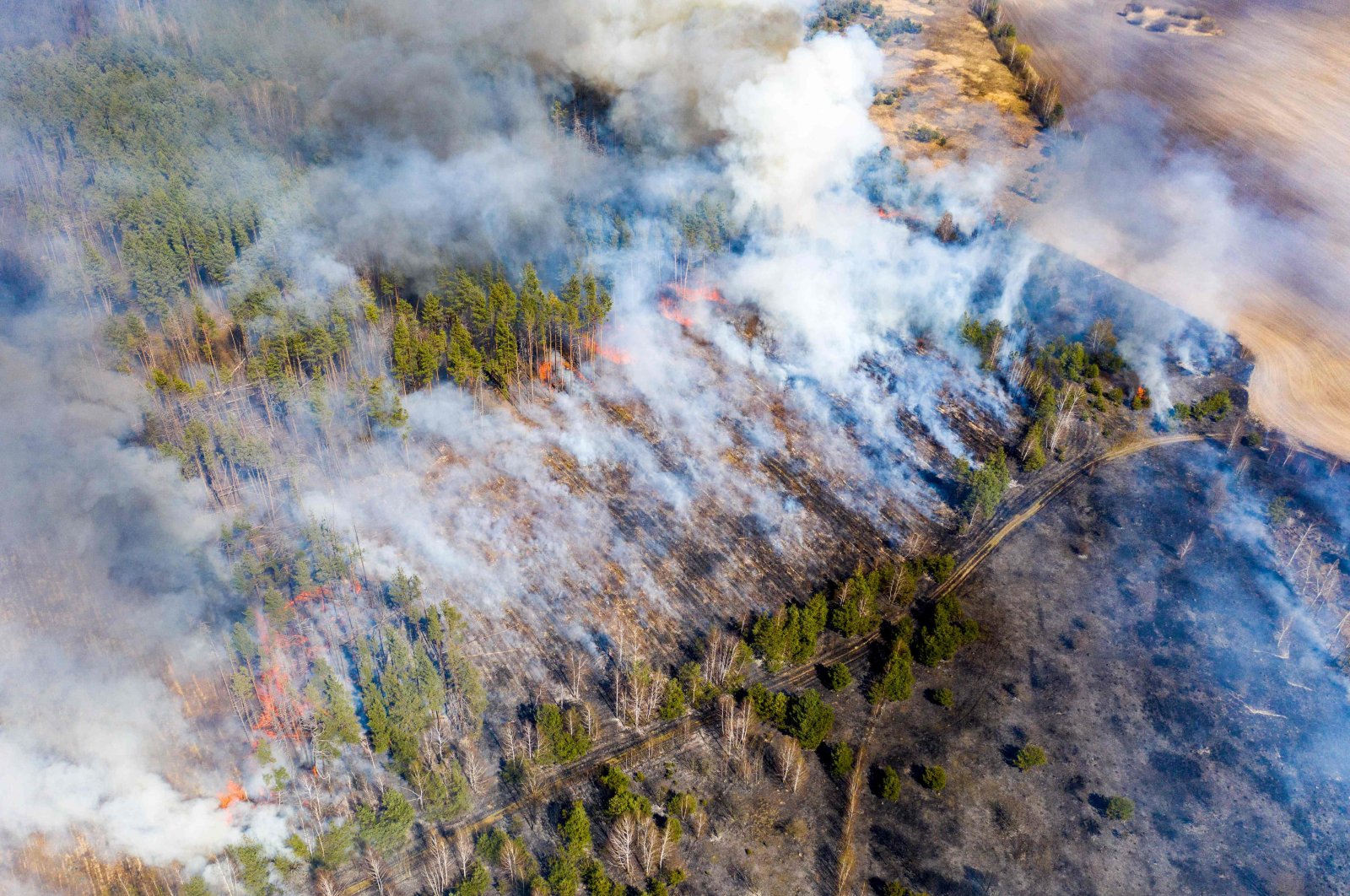 This aerial picture taken on April 12, 2020 shows a forest fire burning at a 30-kilometer (19-mile) Chernobyl exclusion zone in Ukraine, not far from the nuclear power plant. (AFP Photo)
by Agencies Apr 14, 2020 11:29 am
RECOMMENDED

A huge blaze that tore through forests around the defunct Chernobyl nuclear power plant has been put out, Ukrainian officials said Tuesday, saying hundreds of emergency workers used planes and helicopters to douse the flames.

Environmental activists had warned Monday that the fire, near the site of the world's worst nuclear disaster in 1986, posed a radiation risk.

Chernobyl tour operator Yaroslav Yemelianenko, writing on Facebook, had described the situation as critical, saying the fire had reached the abandoned city of Pripyat, 2 kilometers from where "the most highly active radiation waste of the whole Chernobyl zone is located.”

But Ukrainian authorities said Tuesday that though they had registered short-term spikes in Caesium-137 particles in the Kyiv area to the south of the plant, radiation levels remained within normal limits overall and did not require additional protection measures.

"There is no open fire," the Interior Ministry said in a statement. It added that there was "a slight smoldering of the forest floor" however.

President Volodymyr Zelenskiy has promised transparency on the issue and will meet the head of the emergency services later Tuesday. "Society must know the truth and be safe," he said in a statement late Monday.

The fire, one of several which followed unusually dry weather, began on April 3 in the western part of the exclusion zone and spread to nearby forests.

Police say they have identified a 27-year old local resident who they accuse of deliberately starting the blaze.

It remains unclear if the person, who has reportedly confessed to starting several fires "for fun," is partly or fully responsible.

On Monday, police said that another local resident burned waste and accidentally set dry grass ablaze, triggering another devastating forest fire. They said he failed to report the fire to the authorities.

The 2,600-square-kilometer (1,000-square-mile) Chernobyl Exclusion Zone was established after the April 1986 disaster at the plant that sent a cloud of radioactive fallout over much of Europe. The zone is largely unpopulated, although about 200 people have remained despite orders to leave.

Blazes in the area have been a regular occurrence. They often start when residents set dry grass on fire in the early spring - a widespread practice in Ukraine, Russia and some other ex-Soviet nations that often leads to devastating forest fires.