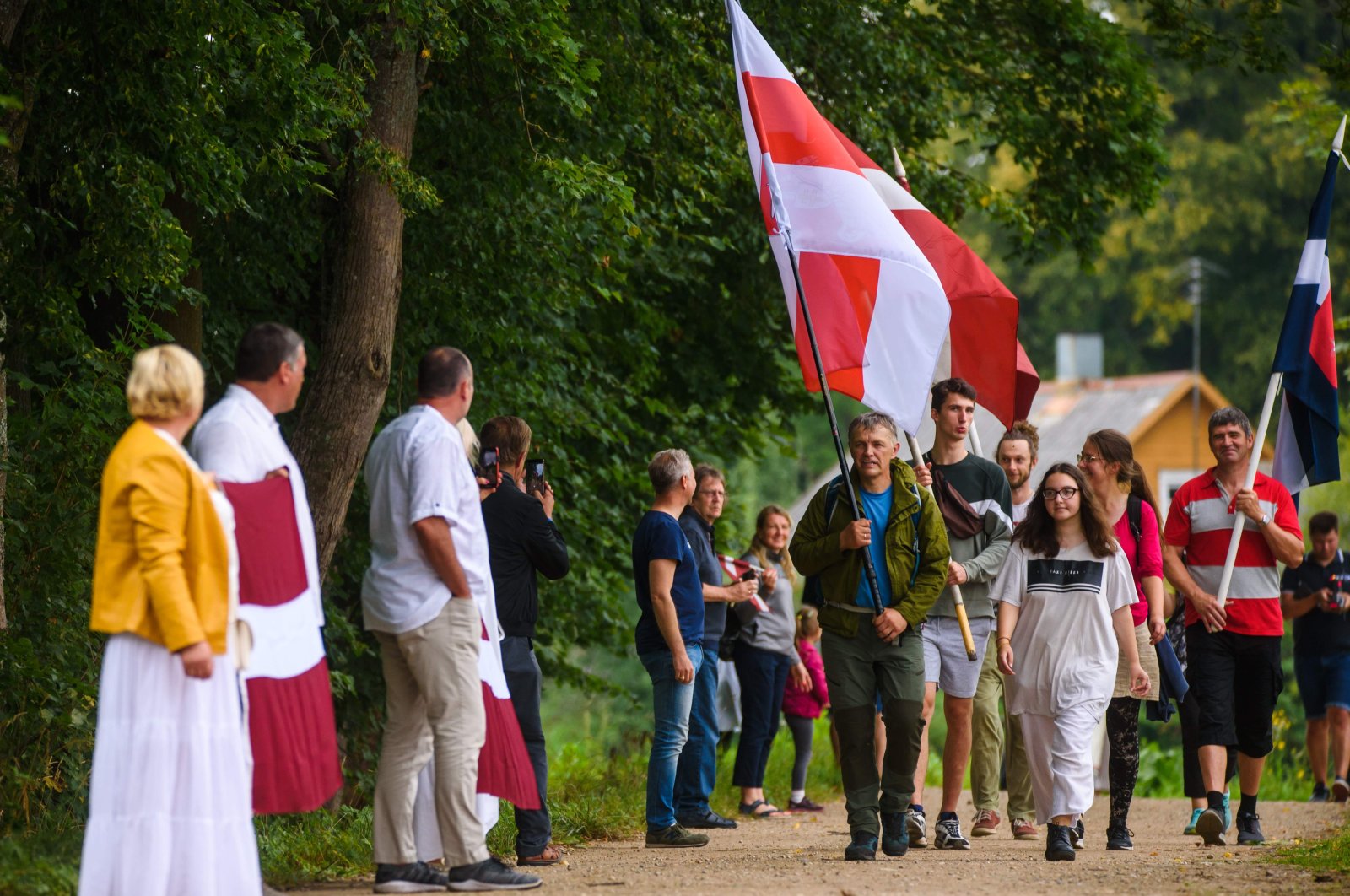 People take part in a solidarity campaign for Belarusian people along the border with Belarus in Piedruja, Latvia, Aug. 23, 2020. (AFP Photo)
by Agencies Sep 18, 2020 12:02 pm
RECOMMENDED

Belarus' borders remained open Friday after President Alexander Lukashenko announced they would be closed warning of a possible "war" with neighboring EU countries, whom he accuses of supporting a burgeoning opposition movement.

The country's border guard service said on its Telegram channel that "checks have been stepped up" and "tactical reinforcements have been deployed" but that "checkpoints are permitting people to enter and leave."

Lukashenko, a strongman politician who has ruled the country for 26 years, told a women's forum Thursday that "half" of the Belarusian army would be deployed to the country's borders with Lithuania, Latvia, Poland and Ukraine. The frontiers themselves would be closed in view of the threat of a "hot war," he added. "We have been forced to withdraw troops from the streets, put the army on high alert and close state borders on the west, primarily with Lithuania and Poland," Lukashenko said at a women's forum, adding that Belarus' border with Ukraine would also be strengthened

“I don’t want my country to be at war. Moreover, I don’t want Belarus, Poland and Lithuania to turn into a theater of military operations where our issues will not be resolved,” he said. "Therefore, today before this hall of the most beautiful, advanced, patriotic people, I want to appeal to the peoples of Lithuania, Poland and Ukraine – stop your crazy politicians, don’t let war break out!" He did not mention neighboring Latvia, which like Poland and Lithuania is a NATO member.

Earlier Thursday, the main opposition candidate in the disputed presidential election said that activists were compiling a list of law enforcement officers allegedly involved in violence against protesters, denouncing the results of the vote. Nearly 7,000 people were detained and hundreds brutally beaten by police during the first several days of post-election protests.

Since claiming a landslide reelection victory in Aug. 9 polls, the figure, sometimes referred to as "Europe's last dictator," has faced massive street protests calling for him to step down. Lukashenko's government claims that the opposition movement is being used as a puppet by Western countries and has deployed the army to Belarus' borders several times in the face of supposed foreign threats, most recently pointing soldiers toward Russia over the summer. Though before the election he accused Moscow of wanting him gone to more easily subjugate Belarus, Lukashenko has U-turned since the vote, leaning on Russian President Vladimir Putin for support against the protesters. While Russia was at first distrustful, it has promised support and blamed the West led by the U.S. for the protests.