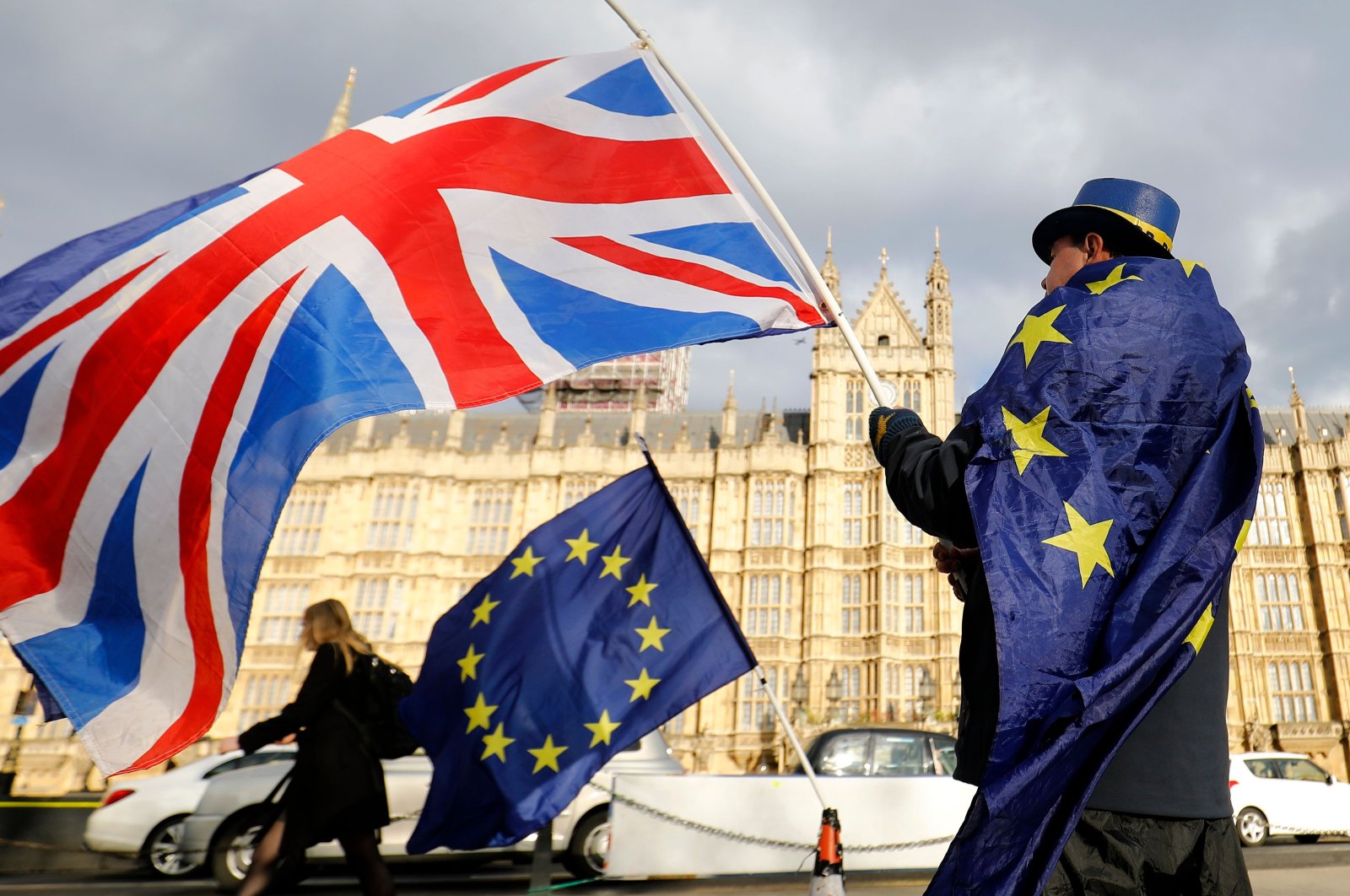 In this file photo, an anti-Brexit demonstrator waves a British flag alongside a European Union flag outside the Houses of Parliament in London, March 28, 2018. (AFP Photo)
by Compiled from Wire Services Sep 09, 2020 3:43 pm
RECOMMENDED

The European Union Wednesday warned Britain that any breach, even the most minor detail, of the withdrawal treaty both sides had signed would break international law and undermine the little trust that is left between both sides in negotiating a future post-Brexit trade agreement. The warning came as the British government introduced legislation that intentionally breached the treaty, amid an increasingly messy countdown to a full Brexit divorce.

Britain announced draft legislation that explicitly acknowledged that some of its provisions would break international law "in a very specific and limited way," according to a copy seen by Reuters.

The proposals have contributed to concerns that Britain could leave the EU in four months with no new agreement on trade.

European Commission President Ursula von der Leyen insisted that the age-old diplomatic cornerstone of “agreements must be kept” continues to apply and called the principle “the foundation of prosperous future relations,” saying that if the U.K. followed through on indications that it was prepared to break an international agreement on EU-British relations, it “would break international law and undermine trust.”

Meanwhile, British Prime Minister Boris Johnson defended the government's plans to pass a bill breaking a treaty on the withdrawal from the EU. Johnson insisted the bill was about "protecting jobs, protecting growth, ensuring the fluidity and safety of our U.K. internal market."

"My job is to uphold the integrity of the U.K. but also to protect the Northern Ireland peace process and the Good Friday Agreement," he added, calling the new bill a "legal safety net" if the EU made an "irrational interpretation" of post-Brexit arrangements.

The government maintains its new U.K. Internal Market Bill is needed to smooth trade between England, Scotland, Wales and Northern Ireland and to help power recovery from the coronavirus pandemic, once a post-Brexit transition ends this year.

But under its EU Withdrawal Treaty, Britain is meant to liaise with Brussels on any arrangements for Northern Ireland, which saw three decades of bloodshed until the 1998 Good Friday Agreement, and will become the U.K.'s only land border with the EU.

Scottish nationalist MP Ian Blackford argued the new bill was a power-grab by London from the devolved administrations in Edinburgh, Cardiff and Belfast, and he gave a withering assessment after Northern Ireland Secretary Brandon Lewis had conceded the changes did "break international law in a very specific and limited way."

"The prime minister and his friends, a parcel of rogues, are creating a rogue state," he told the Westminster parliament.

Lewis's admission Tuesday provoked incredulity across the political spectrum in Britain, Brussels and beyond, just as British and EU negotiators are engaged in fraught talks to agree on a new trading relationship by a crunch EU summit in mid-October.

Critics accused Johnson's government of engaging in bad-faith diversionary tactics as it battles Brussels on key issues such as state subsidies and fishing rights.

According to them, the bill – if approved – would give ministers the power to ignore parts of the protocol by modifying the form of export declarations and other exit procedures. It will be debated in both chambers of Parliament and require their approval before becoming law.

Britain quit the EU in January but has remained part of its single market, largely free of trade barriers, under a status quo agreement that expires in December. It has been negotiating a trade deal to take effect from Jan. 1 but says it is willing to walk away if it cannot agree on favorable terms.

The British pound, which tends to rise with the perceived likelihood of a negotiated trade deal with the EU, was down around 0.4% in mid-afternoon at $1.2939.

"We would continue to trust the British government to fully implement the exit agreement," foreign ministry spokesperson Maria Adebahr told reporters in Berlin, which currently holds the European Union presidency.

"That is why we see yesterday's announcement in the House of Commons with concern," she added, referring to the U.K. plans to make unilateral changes in breach of the Withdrawal Agreement with the EU.

Irish Prime Minister Micheal Martin said he would speak to Johnson to express "very strong concerns" about the plans while his deputy, former PM Leo Varadkar, called it a "kamikaze" threat that had backfired.

Senior members of Johnson's Conservative Party have already voiced anger that Britain might consider such a move. Scotland and Wales said the bill would weaken the fabric of the U.K. itself by stealing powers from Wales, Scotland and Northern Ireland.