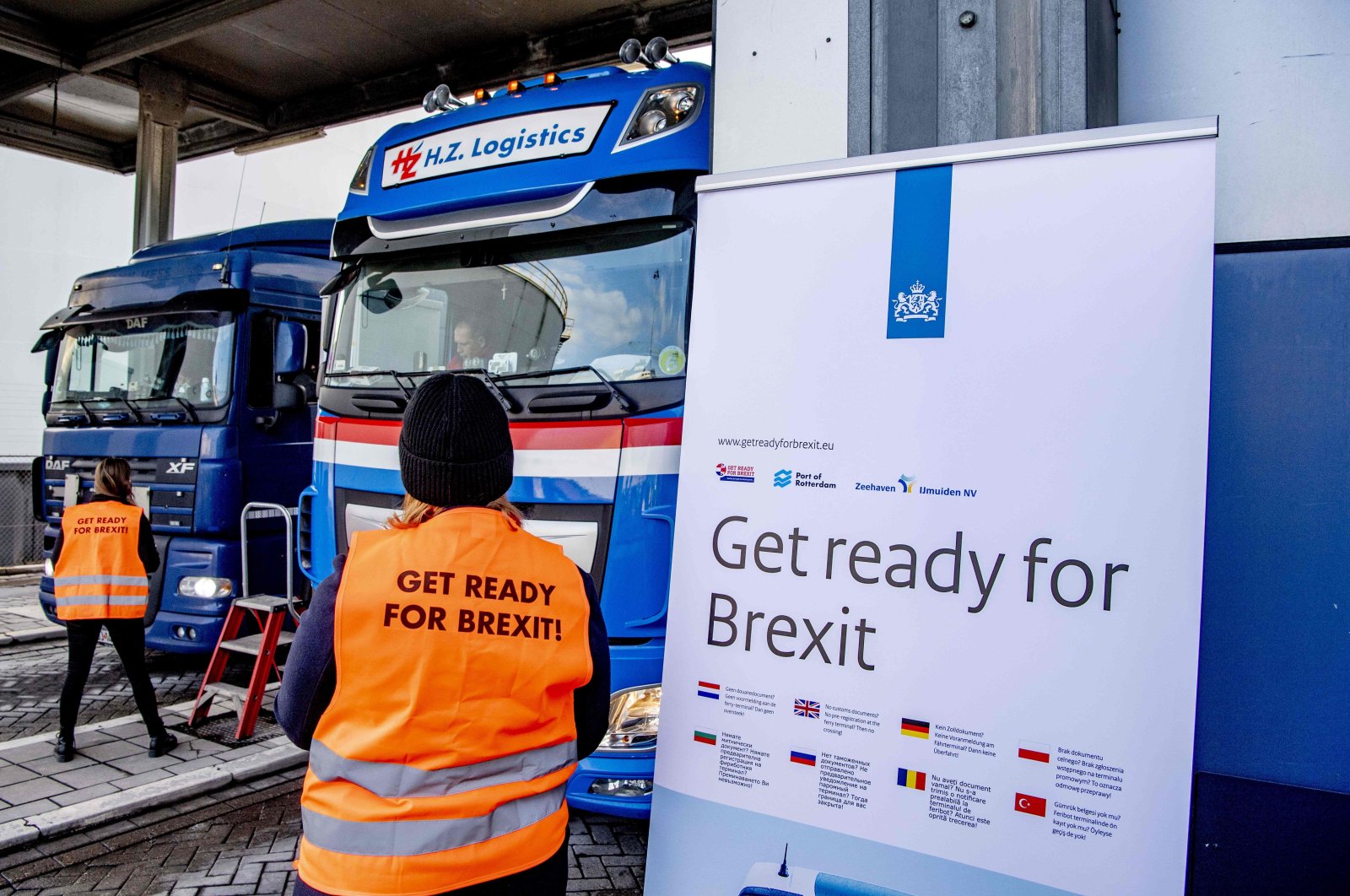 Flyers are distributed, as part of the Get Ready For Brexit campaign, to truck drivers at the terminal of a ferry operator in the port of Rotterdam on Dec. 1, 2020. (AFP Photo)
by ASSOCIATED PRESS Dec 01, 2020 6:41 pm
RECOMMENDED

The British government told businesses on Tuesday to make sure they are ready for big changes when the U.K. makes its final Brexit break from the European Union in exactly a month. But with negotiations on a free-trade deal with the bloc stuck, firms say they still don't know key details of what those changes will be.

Michael Gove, the minister in charge of Brexit preparations, said trade talks were "getting close to the wire.”

"It’s certainly the case that there is a chance that we may not get a negotiation outcome, that’s why it’s important that businesses prepare for all eventualities,” he told ITV.

The U.K. left the EU early this year, but remained part of the 27-nation bloc’s economic embrace during an 11-month transition as the two sides tried to negotiate a new free-trade deal to take effect Jan. 1.

Talks have already slipped past the mid-November date long set as a deadline for an agreement to be reached if it is to be approved by lawmakers in Britain and the EU before the end of the year.

Teams led by EU chief negotiator Michel Barnier and British counterpart David Frost met through the weekend in London with no breakthrough. Talks are continuing, and U.K. officials have said this is the last week to strike a deal.

The two sides remain stuck over key issues including the resolution of future disputes and "level playing field” provisions – the standards the U.K. must meet to export into the EU.

The biggest hurdle appears to be fish, a small part of the economy with outsized symbolic importance for Europe’s maritime nations. EU countries want their boats to be able to keep fishing in British waters, while the U.K. insists it must control access and quotas. Gove said EU demands on fishing were "not fair,” but EU nations such as France are reluctant to relinquish their access to British waters.

Speaking from the French presidential palace after a meeting with the Belgian prime minister on Tuesday, French President Emmanuel Macron warned Tuesday that France won’t accept an agreement that "would not respect our interests in the long term.” Macron said France would be "extremely vigilant” on the "essential” issues of fair competition and fishing he said after meeting Belgium's prime minister in Paris.

Belgian Prime Minister Alexander De Croo agreed that "an agreement is important but not at any price.” He said the EU and Britain were in the last moment of negotiations. "We may score a game-winning goal at the last minute,” he said. "It’s time to really see whether it’s possible to move forward and get a deal.”

If there is no deal, New Year’s Day will bring huge disruption, with the overnight imposition of tariffs and other barriers to U.K.-EU trade. That will hurt both sides, but the burden will fall most heavily on Britain, which does almost half its trade with the EU.

The British government has launched a major information campaign, with billboards and advertisements warning that "time is running out” and telling businesses to get ready for change on Jan. 1. But firms that trade with the EU say they still don’t know what conditions they will face in a month’s time.

"There’s an awful lot I don’t feel ready for because I can’t get the answers from the government website,” said James Greenham, managing director of EMS Physio, which exports physiotherapy equipment.

"You go on the government website and you get taken down various wormholes and then it ends in a dead-end,” he told the BBC. "There’s no information. The decision has yet to be taken.”

Things will be smoother with a deal, which would remove quotas and tariffs on goods, though businesses still face new obstacles and red tape, including customs declarations and border checks. Gove said "more than 80% of what business needs to do” would be the same whether or not there is an agreement. "But I very much want a deal and I believe that we can secure one,” he said.