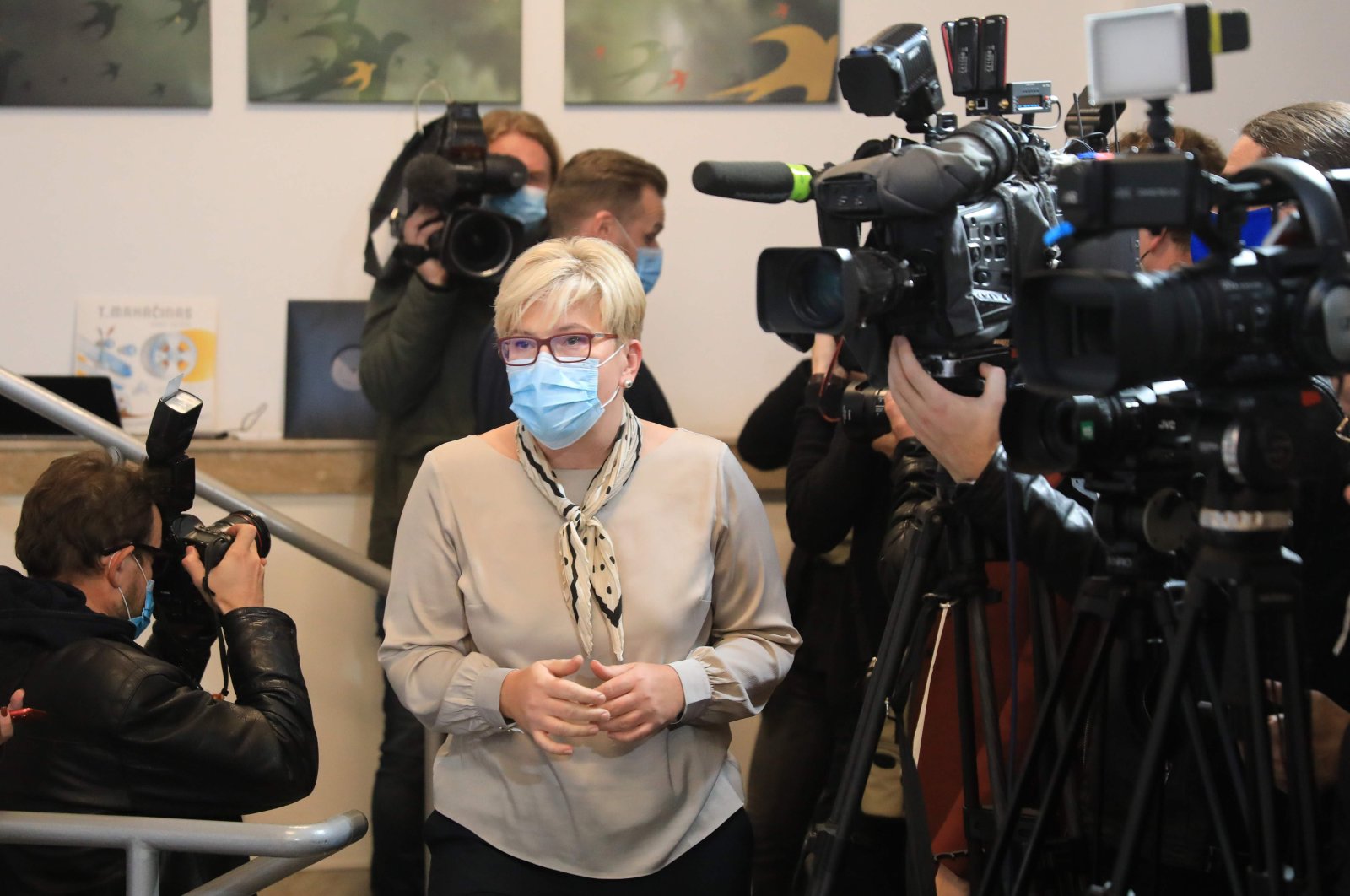 Ingrida Simonyte, candidate of Lithuania's conservative Homeland Union party, speaks to the media as she waits for the results of the second round of Lithuania's parliamentary election, in Vilnius, Lithuania, Oct. 25, 2020. (AFP Photo)
by Agencies Oct 26, 2020 12:32 pm
RECOMMENDED

Lithuania's center-right opposition won the parliamentary elections on Sunday following a campaign overshadowed by the coronavirus pandemic, opening the way for an all-female coalition at the head of the Baltic state.

Ex-finance minister Ingrida Simonyte, who is the conservatives' candidate for prime minister, is now expected to build a majority coalition with two liberal parties, the Liberal Movement which won 12 seats and Freedom Party, which won 10. Both of the liberal parties are led by women.

During the campaign, Simonyte criticized Skvernelis's government for its handling of the pandemic and she said she will seek more expert advice.

"We need to change the crisis management model because we lack transparency and clarity about who gives advice to the government and who has the final word. We hear from the medics and scientists that they are not listened to," she told Reuters late Sunday.

Her previous experience as a finance minister who dealt with the fallout of the global financial crisis was seen by voters as an asset against the pandemic.

"I believe she would deal with the situation better than current authorities due to her values and critical thinking, she is tough but also seeks dialogue," Simona Dirse, 33, who works at a Vilnius insurance company, told Agence France-Presse (AFP).

Despite the recent surge in cases, COVID-19 related deaths are below the EU average, while the International Monetary Fund (IMF) forecasts the Lithuanian economy will contract just 1.8% this year, the smallest blow of any eurozone country.

The new Cabinet is expected to be sworn in in December.

The results highlighted the political divide between urban and rural populations as social inequality remains a sore point for many Lithuanians.

Simonyte has also pledged to accelerate the economy's modernization from a cheap labor model to higher-value manufacturing.

The 45-year-old, who is a fan of rock music and ice hockey, is popular among young urbanites.

Skvernelis, who is more popular among lower-income rural voters, had pledged to continue fighting social inequality if reelected.

All major parties share a pro-EU and NATO platform and all back Vilnius's drive to rally support within the EU for neighboring Belarus's democratic opposition after the disputed presidential election there.

He said the right-wing coalition may be more active in seeking foreign investments but he "saw no reason for strategic changes in foreign policy."

President Gitanas Nauseda, whose term runs out in 2024, will continue to lead foreign and defense policies.