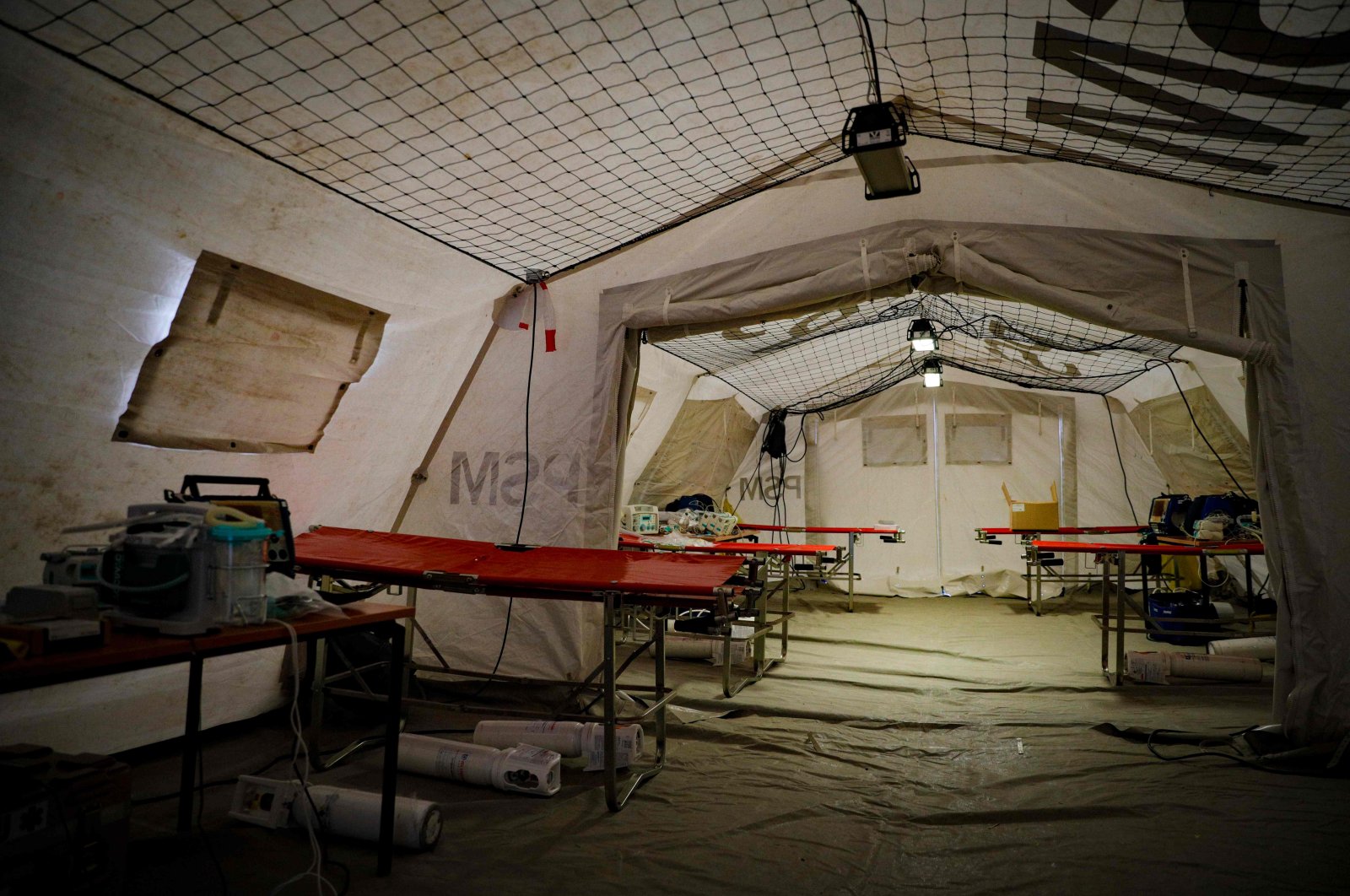 A photo shows the interior of a tent with medical equipment for treating patients infected with COVID-19, installed on the tarmac at Paris Orly Airport, France, Friday, April 3, 2020. (AFP Photo)
by French Press Agency - AFP Apr 07, 2020 11:13 am
RECOMMENDED

While the world waits for a coronavirus vaccine, medicines used to deal with the symptoms of the disease are increasingly in critically short supply in Europe, the worst-hit continent.

From sedatives needed to intubate patients struggling to breathe to anti-malarial drugs heavily backed by U.S. President Donald Trump, the COVID-19 pandemic is eating up stocks.

The European Medicines Agency said Monday that the "continued availability of medicines, in particular those used for patients with COVID-19, is of critical concern for EMA."

"Some EU Member States have indicated that they are starting to see shortages of certain medicines used for patients with COVID-19 or are expecting such shortages to occur very soon," the Amsterdam-based regulator said in a statement.

Europe is the continent most heavily affected by the disease with more than 50,000 deaths so far, and the strain is showing on hospitals dealing with a wave of patients suffering from coronavirus.

Nine major European hospitals launched an appeal for help at the end of March, asking for international cooperation to guarantee a steady supply of medicines for the disease.

They warned in particular of a shortage of vital drugs for the resuscitation of patients including muscle relaxants, sedatives and painkillers, which are being used up rapidly with "insufficient or non-existent" restocking because of the pandemic.

The situation led the EMA to take urgent measures under which each pharmaceutical company must report directly to the agency to speed up communications between the industry and the EU on shortages.

The EMA said an existing committee on medicine shortages caused by major events, which includes the European Commission and relevant authorities in each EU country, would also look at how to guarantee supplies.

In France, Prime Minister Edouard Philippe admitted there were "very strong tensions" over certain medicines needed in resuscitation and intensive care units because of an "unheard of" demand.

The same is true in Spain where the national regulator said there were "one-off tensions" over the supply of certain medicines used in intensive care, especially sedatives for intubation.

To deal with the problems, health agencies have in some cases allowed medicines to be used outside their normal usage, for example, veterinary medicines which use the same active substance as drugs for humans.

In an online guide for doctors dealing with shortages, the Spanish association of intensive care medics said it was having to "consider the prescription of sedatives that are not normally used."

French officials said they were in contact with laboratories to ensure rapid restocking of scarce medicines, while Spanish labs had boosted production.

The rush for highly publicized but still experimental treatments for COVID-19 has also caused problems for patients who use the drugs for other illnesses.

The anti-malarial drugs chloroquine and hydroxychloroquine should only be used to treat COVID-19 in clinical trials or in case of "national emergency," the EMA warned last week.

The medicines have shown early promise against the COVID-19 illness in early studies in France and China.

But the EMA said both have a number of potentially serious side effects and there was also a danger of a shortage of hydroxychloroquine, which is also used to treat arthritis.

Doctors in Italy, the country hardest-hit by the virus, also warned last week that limited stocks of the two drugs could wreck plans to use them in clinical trials.

Similar concerns have been raised about a combination of two HIV drugs, lopinavir and ritonavir.