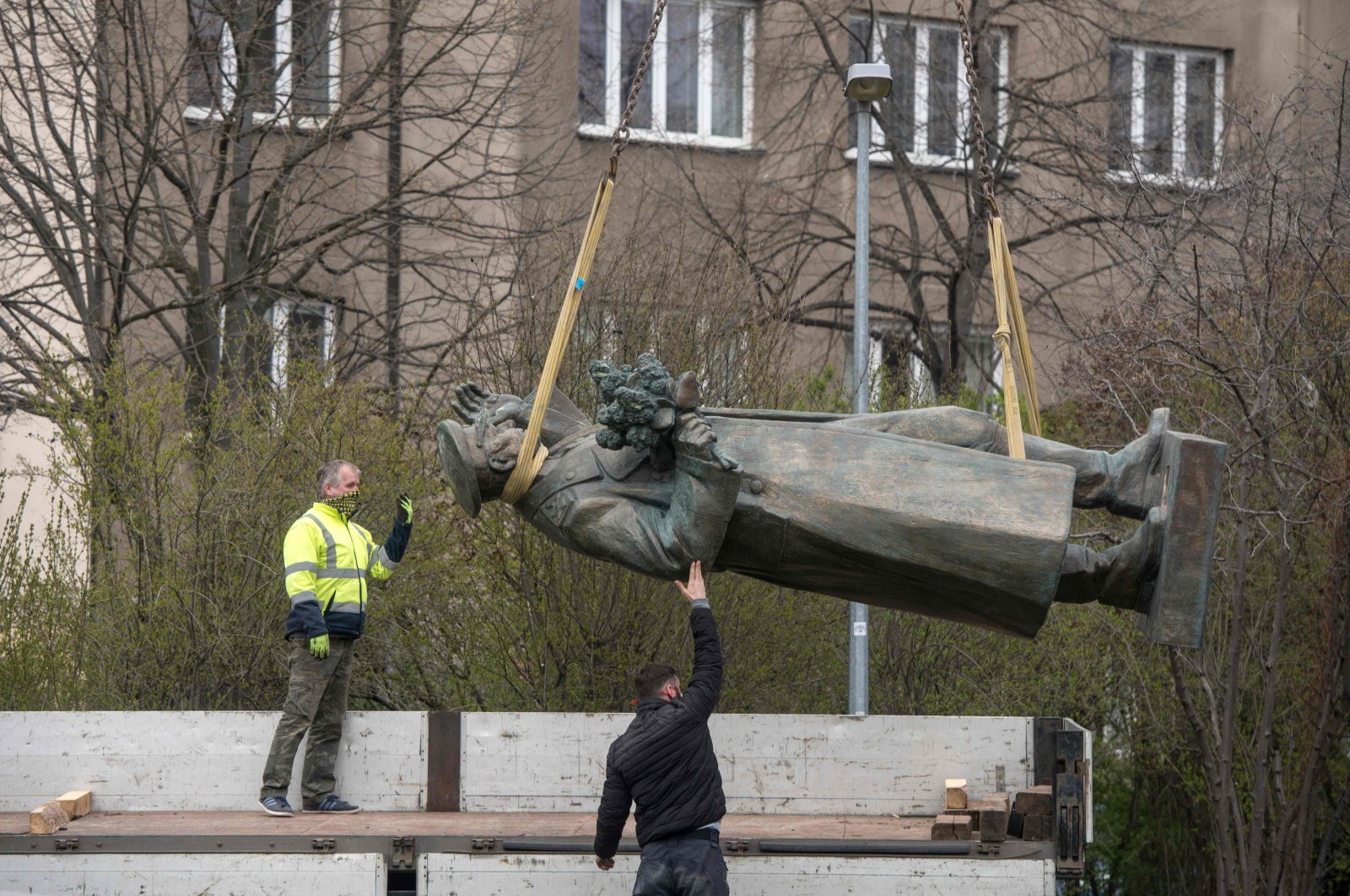 Workers load the statue of Soviet general and Marshal of the Soviet Union Ivan Stepanovic Konev on a truck as it is made ready for removal in Prague, April 3, 2020. (AFP Photo)
by French Press Agency - AFP Jun 05, 2020 8:32 pm
RECOMMENDED

The Czech Republic on Friday accused a Russian embassy employee of spreading false information about a planned poison attack and expelled two Russian diplomats, prompting an angry reaction from Moscow.

The Russian foreign ministry slammed the expulsion in a statement as a "hostile measure" and said it would deal a "serious blow to Russian-Czech relations."

In April, Respekt newspaper cited security sources as saying that a Russian national using a diplomatic passport had arrived in Prague carrying ricin, a toxic poison that can be used as a biological weapon.

Around the same time, three Prague politicians who had each made political gestures that angered Russia were placed under police protection.

The case further soured already tricky relations between Prague and the Kremlin.

On Friday, the foreign ministry said: "Prague's measures will not only receive an adequate response, but they will also be considered in Russia's policy-making toward the Czech Republic.

"We will seek a response to such provocations," it said.

One of the three politicians named in the hoax, Ondrej Kolar, had spearheaded the April removal of a Cold War-era statue dedicated to Soviet general Ivan Konev a hero to many Russians but a symbol of Soviet-era oppression to many Czechs.

Another of those targeted, Prague mayor Zdenek Hrib, supported renaming the Prague square where the Russian embassy is based after Boris Nemtsov, a Russian opposition leader murdered in 2015.

The embassy has since started using a different door without moving to a different address.

And the district run by Pavel Novotny, the third politician mentioned in the hoax, installed a memorial to the so-called Vlasov Army – Red Army defectors who helped to liberate Prague in May 1945.

Mikhail Bryukhanov, head of the Russian foreign ministry's international cooperation agency Rossotrudnichestvo, said both of the expelled diplomats were its employees.

Speaking to the RIA Novosti news agency, Bryukhanov said one was Andrei Konchakov, the interim head of Rossotrudnichestvo's Czech branch, while Czech media identified the other diplomat as Konchakov's deputy Igor Rybakov.

Czech media have previously reported that Konchakov arrived in Prague in March, suggesting he was the supposed man with ricin in his suitcase.

"The Czech Republic has invented this 'ricin scandal', a mean story out of a cheap thriller.

"The decision is absolutely unjustified and it obviously won't help relations between the two countries," Bryukhanov said.

Babis cited intelligence as showing the hoax was the result of infighting at the Russian embassy.

"Besides burdening our security forces, (the employee) caused further complications in Czech-Russian relations and harmed the good reputation of the Russian Federation in the Czech Republic," said the billionaire populist prime minister.

Foreign Minister Tomas Petricek said Russia's approach to the problem had left his country with no option other than to expel the diplomats "even though we're aware of the expected reciprocal steps."