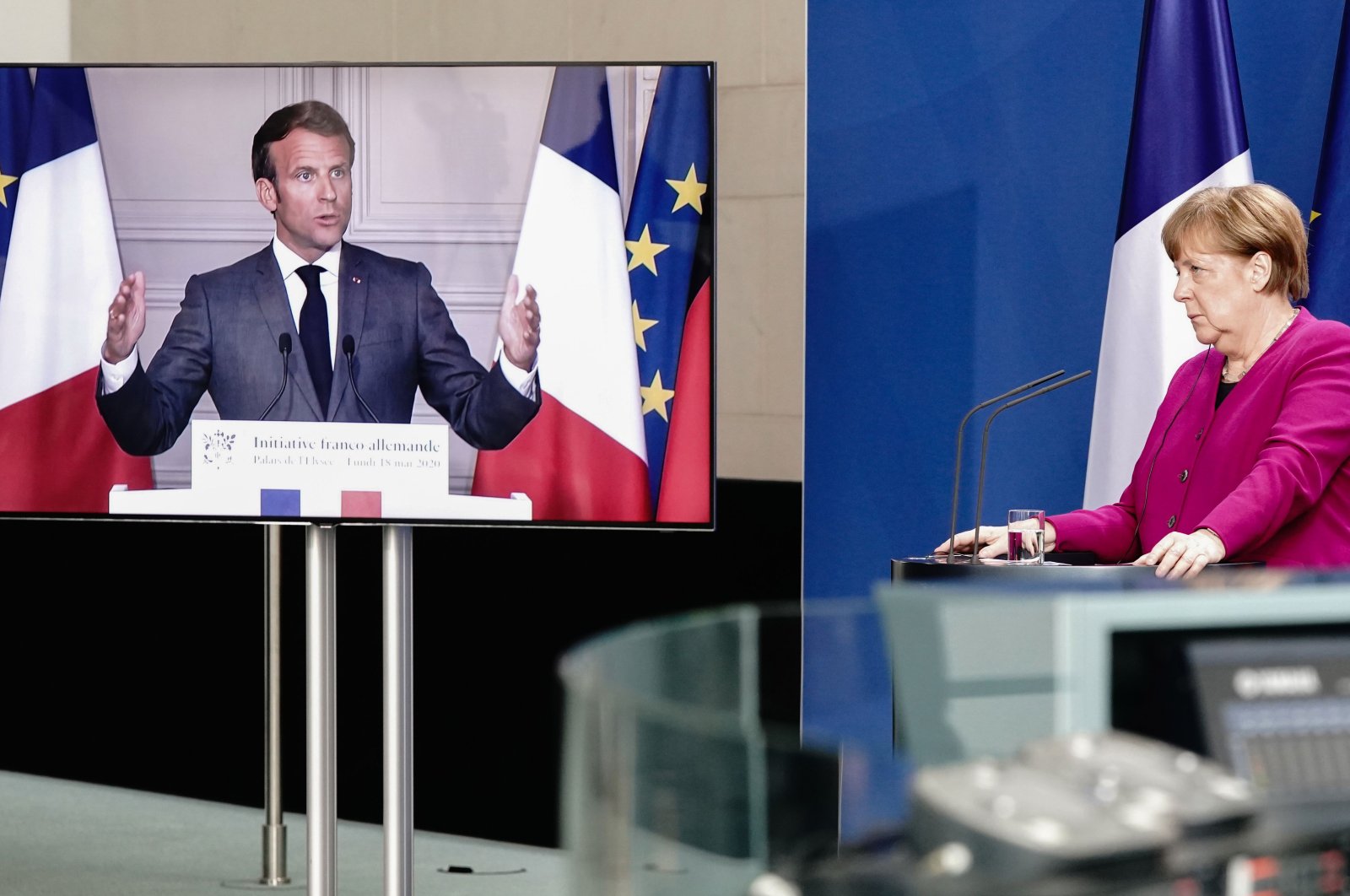 German Chancellor Angela Merkel listens during a joint press conference with French President Emmanuel Macron at the Chancellery, Berlin, May 18, 2020. (AFP Photo)
by Daily Sabah with AP May 22, 2020 8:58 am
RECOMMENDED

With economies battered and countries facing their biggest recession since World War II amid the COVID-19 pandemic, coronavirus rescue packages denote the failed solidarity among the European Union member states.

Putting their disagreements on several issues aside, German Chancellor Angela Merkel and French President Emmanuel Macron on Monday announced a new French-German initiative for an ambitious economic recovery plan, proposing a 500 billion-euro ($549.73 billion) fund to help mend an economy devastated by the pandemic.

Under their plan, the fund will be financed by borrowing from the market in the name of the EU while the money given out will not have to be paid back. It would be a one-off part of the EU’s budget and take advantage of the EU institutions' ability to borrow at extremely low interest rates over a long period. It adds to a 540 billion-euro package agreed upon among finance ministers from the 19 EU countries that use the euro. That included loans from the eurozone bailout fund that would have to be repaid.

The plan was viewed by some as a step toward stronger EU financial links and welcomed by French and German media. “The love has finally returned," said German newspaper Die Zeit. "The Franco-German motor is back again." In France, Le Monde daily added: "A new Franco-German start for Europe."

However, the Paris-Berlin initiative seems insufficient in finding common ground as the plan now has to win support from all 27 EU members. It signals that the 27-country union faces challenges not just from the virus crisis, but from a significant north-south split and populist forces in member countries Hungary and Poland.

Living up to their reputations for budgetary frugality, the Netherlands, Austria, Denmark and Sweden are working on a proposal for a European recovery fund that will have tough conditions attached for countries that seek financial help. Since the proposal is only for a limited one-time fund during a crisis, it would represent incremental change. But some were seeing it as potentially the harbinger of more EU central spending, and it could derail or water down a French-German plan seen as a groundbreaking way to deal with the economic fallout of the coronavirus crisis.

Dutch Prime Minister Mark Rutte on Wednesday mentioned – but pointedly did not endorse – the French-German proposal, while Austria has signaled it was not happy that the proposal was based on grants rather than loans that need to be repaid.

When asked about the recovery plan, Rutte called the Merkel-Macron suggestion “a proposal" and said: "We’re also working on a proposal. We’re working closely with Denmark, Austria and Sweden. There will be a lot of proposals.”

The EU's executive commission is expected to unveil its own proposal for a recovery fund, which EU member states will then have to find a compromise.

The Netherlands has always taken a tough stance on economic aid for struggling southern European nations, and the coronavirus pandemic does not appear to have changed that.

Without going into detail, Rutte said the proposal by the nations dubbed by some as the "Frugal Four" would likely include tough conditions for loans.

Whether the four Visegrad Group countries, Poland, the Czech Republic, Slovakia and Hungary, would support the recovery plan remains unclear as calls have grown in the bloc that more flexibility is needed to ensure all of Europe, not just the richer northern countries, can recover from the economic crisis.

The heads of the four Visegrad countries issued a joint statement along with Germany during a videoconference about rebuilding the EU economy during the post-pandemic era. However, the leaders of the four countries remain critical of the proposal to create a European rescue program to help the worst virus-hit countries like Italy and Spain.

"It would be unfair to be penalized for being successful in dealing with the epidemic," Czech Prime Minister Andrej Babis said, underscoring how the country does not support the idea that the EU, as a whole, should borrow money to manage the pandemic consequences as the question of the loan guarantee is not yet resolved.

The Visegrad Group has become a niggling thorn in Brussels' side. The members regularly clash with the EU over their increasingly anti-globalist and anti-immigration stances while rejecting the Paris-Berlin axis over significant issues. The populist governments in Poland and Hungary have locked horns with the EU over the rule of law, migration and climate policies.