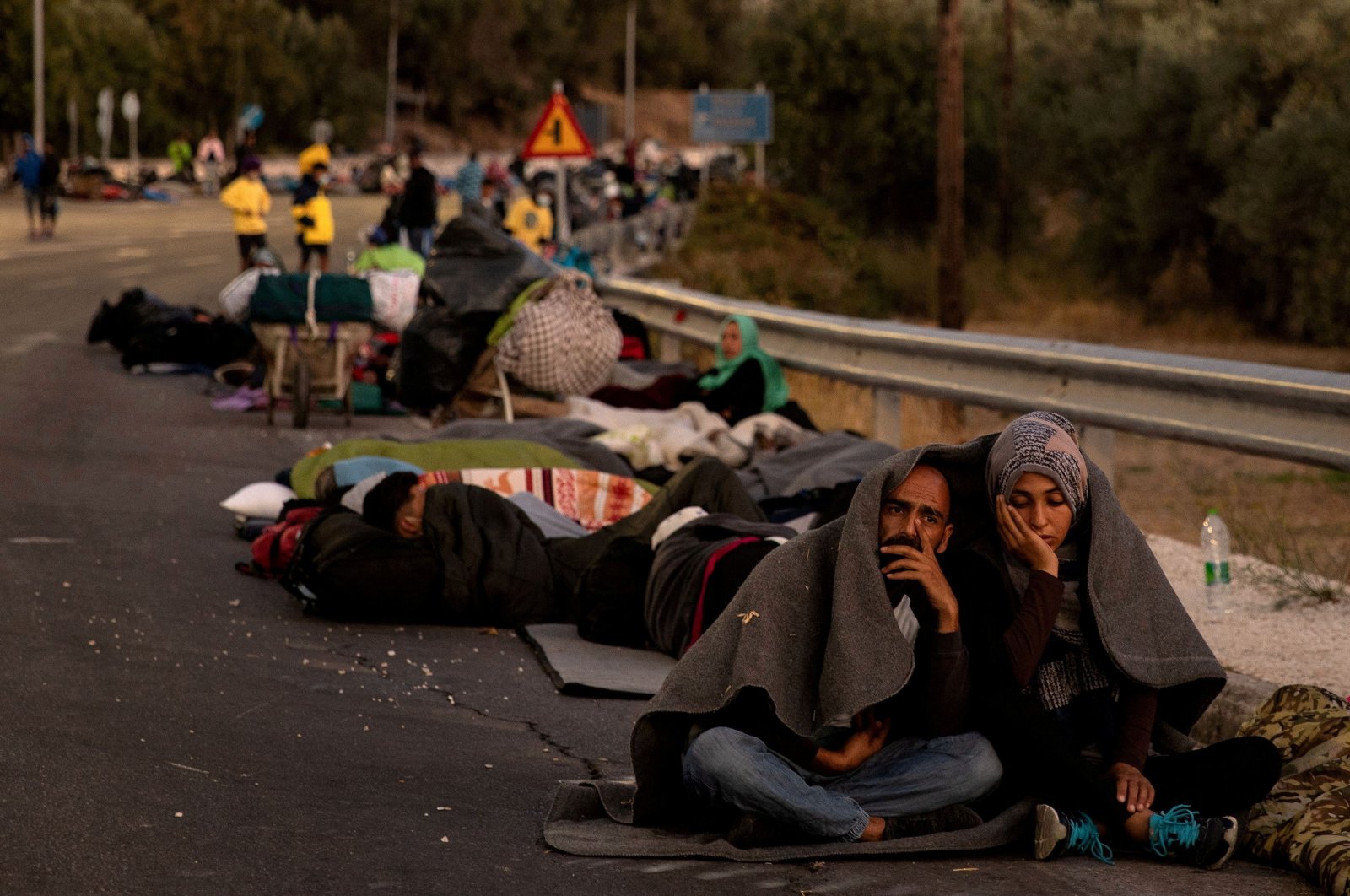 A couple sits covered with a blanket as refugees and migrants camp on a road following a fire at the Moria camp on the island of Lesbos, Sept. 10, 2020. (REUTERS Photo)
by Agencies Sep 23, 2020 3:13 pm
RECOMMENDED

The European Union's executive proposed on Wednesday overhauling the bloc's broken migration and asylum rules, seeking to end years of feuds and bitterness over the hundred of thousands of people fleeing wars and poverty in the Middle East and Africa.

The long-awaited proposal for a "New Pact on Migration and Asylum" comes two weeks after a devastating fire in an overcrowded camp on the Greek island of Lesbos and five years after Europe's last major migrant crisis.

It proposes that EU member states who do not want to volunteer to house more migrants and reduce pressure on Italy and Greece, where most arrivals land, can instead take charge of sending those whose asylum requests are rejected back to their homelands. Under the new proposal, those arriving would be assigned to specific countries based on family links, history of education or work, or having a visa issued by a member state.

Endless rows over where to locate refugees and migrants have caused bad blood between the Mediterranean-shore countries where they mainly arrive, the reluctant easterners, and the richer northern states where many of the new arrivals aspire to live. The bloc was caught off guard in 2015 when more than a million people made it to EU shores, overwhelming security and welfare networks, and fomenting far-right sentiment.

The proposal disappointed migrants' rights activists and refugee agencies, who had hoped for compulsory quotas for refugee settlement and an end to a "Fortress Europe" ringed by squalid refugee camps.

The plan is likely to face a rough reception in national capitals, many of which are keen to see the EU take ownership of the problem, without wanting to take charge of large numbers of refugees on their own soil. "It won't work like this," Austrian Chancellor Sebastian Kurz told Agence France-Presse (AFP) this week, rejecting the idea of mandatory quotas for refugees for all EU countries. Poland, Hungary, the Czech Republic and Slovakia also oppose compulsory relocation and torpedoed such plans after the 2015 migration crisis. But Brussels had promised another ambitious plan with an accelerated process to remove migrants who are unlikely to obtain protection. Those coming from countries with a lower than 20% positive response rate to asylum applications, such as Tunisia or Morocco, will be processed at the border and within 12 weeks. And if a country is subject to migratory "pressure" and believes that it cannot take care of migrants, it can request the activation of a "compulsory solidarity mechanism" by the commission.