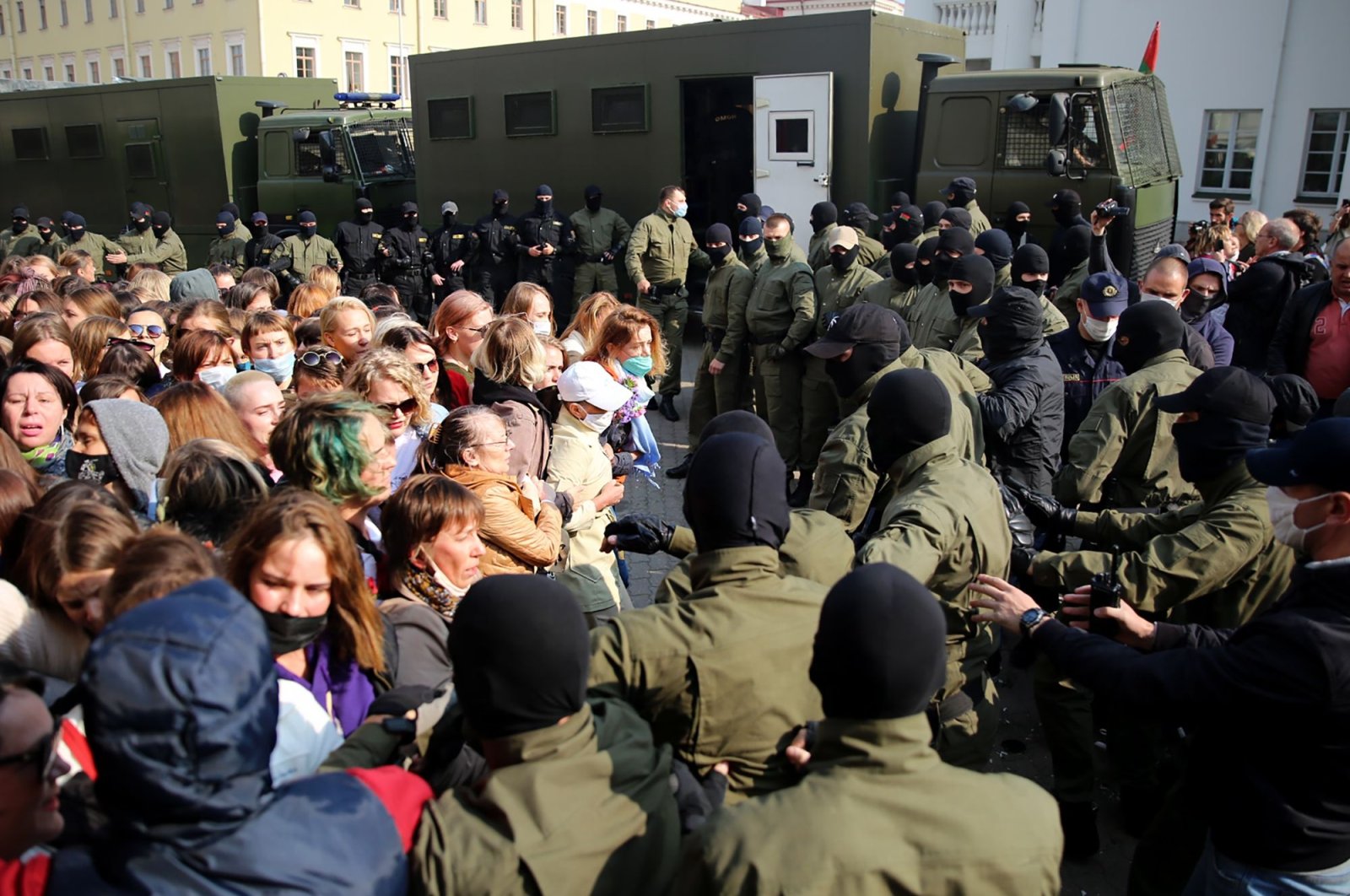 Riot police officers surround women during a rally to protest against the presidential election results in Minsk on Sept. 12, 2020. (AFP Photo)
by REUTERS Sep 12, 2020 5:48 pm
RECOMMENDED

Belarus police detained dozens of protesters Saturday as thousands of people gathered in the capital Minsk demanding the release of a jailed opposition leader, the latest in a wave of mass protests following a disputed election.

Maria Kolesnikova, 38, has emerged as a key opposition figure after others were either jailed or forced out of the country, including Svetlana Tikhanovskaya who challenged President Alexander Lukashenko in the presidential election.

Protesters say the Aug. 9 election was rigged to hand Lukashenko a phony landslide win and that Tikhanovskaya – who has since fled to Lithuania – was the real winner. Lukashenko, who has been in power for 26 years, denies this and has said foreign powers are behind the protests.

At least 5,000 protesters, many of them women, gathered in central Minsk on Saturday, chanting "Go away!" in reference to Lukashenko, and "Masha" – a common alternative for Maria – in support of Kolesnikova, a Reuters witness said.

"Sveta (Tikhanovskaya) is my president, Masha is my queen," read one of the slogans held up in the crowd.

Police starting detaining people shortly after the protests started at 1200 GMT, putting at least 40 into police vans in the first hour of the rally alone, according to the witness.

Kolesnikova was driven to the Ukrainian border earlier last week after being seen snatched off the streets of Minsk and into a van by masked men.

According to two allies who were with her, she prevented being expelled from Belarus by tearing her passport up into small pieces and throwing it out of a car window. She is now detained in Minsk and faces a potentially long prison term over accusations of trying to seize power illegally.

Tikhanovskaya, who stood against Lukashenko in place of her better-known husband who was detained before the election, called on Saturday for the police to stop cracking down on dissent.

"Violence you are putting on women is disgraceful," she said in a statement. "Anyone who commits a crime against peaceful protesters will be called to answer."