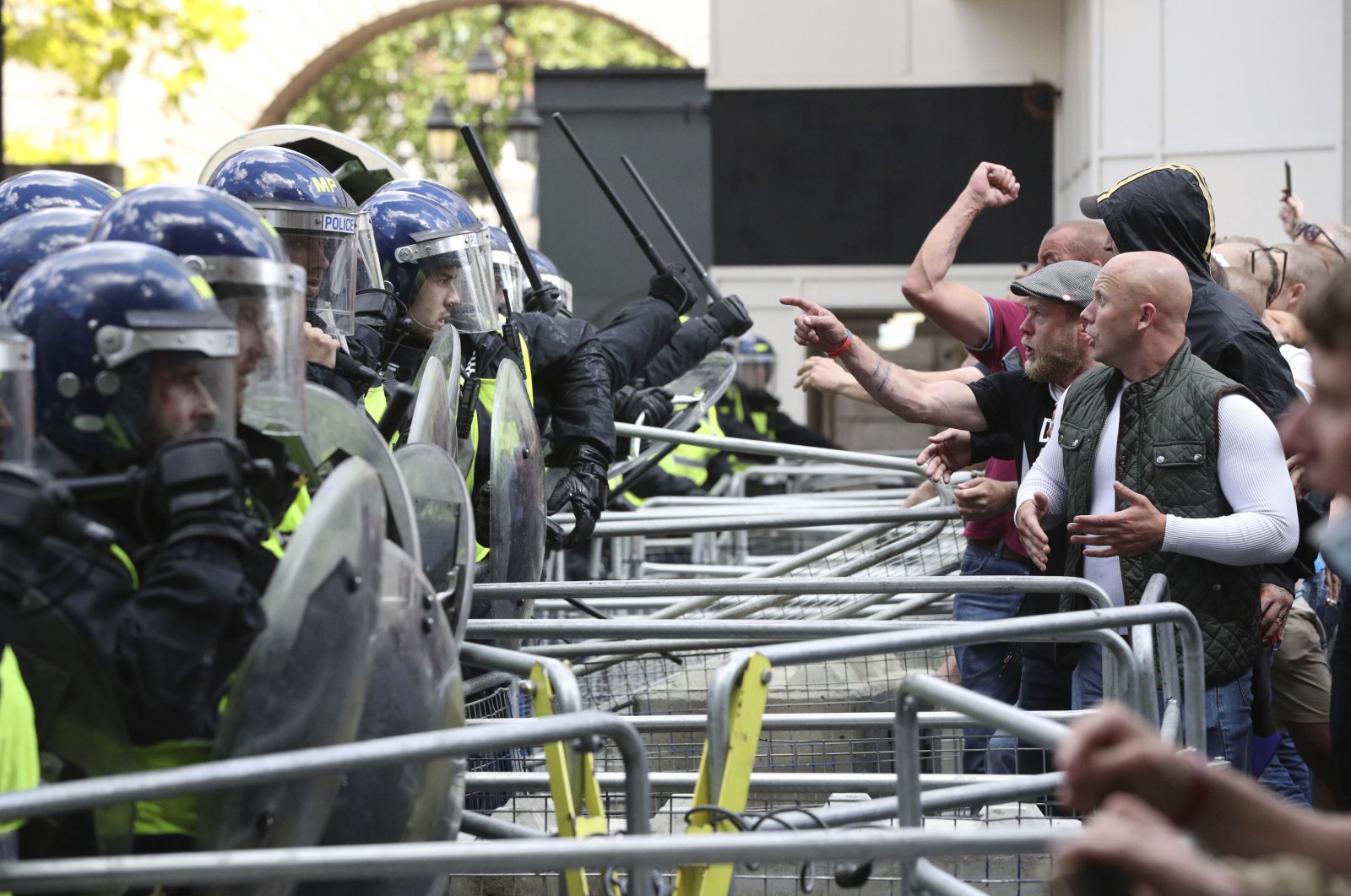 Police are confronted by protesters from the Democratic Football Lads Alliance on June 13, 2020. The death of George Floyd in the United States has prompted demonstrations by the Black Lives Matter movement and counter-protests by racist, far-right groups, provoking a wider debate on Britain's colonial past. (AP Photo)
by Daily Sabah and Agencies
Jun 13, 2020 4:45 pm

Hundreds of far-right activists gathered to demonstrate in central London's Parliament Square Saturday, despite strict police restrictions and warnings to stay home to contain the coronavirus.

Some threw bottles and cans at officers, while riot police on horses pushed back the crowd. The protesters, who appeared to be mostly white men, chanted "England” and "We're racist, we're racist, and that's the way we like it."

Various groups of ring-wing activists and football "firms" – hooligan gangs operating under the guise of unofficial fan groups – descended on the U.K. capital, claiming to want to guard historical monuments that have been targeted in the last week by anti-racism protesters.

Many of the right-wing supporters gathered around the statue of wartime Prime Minister Winston Churchill and the Cenotaph war memorial, which both were boarded up Friday to protect them from vandalism.

Officials put protective panels around the monuments amid fears that far-right activists would seek confrontations with anti-racism protesters under the guise of protecting statues.

"I am extremely fed up with the way that the authorities have allowed two consecutive weekends of vandalism against our national monuments,” Paul Golding, leader of the far-right group Britain First, told the Press Association.

A Black Lives Matter group in London called off a demonstration planned for Saturday, saying the presence of the counter-protesters would make it unsafe.

Some anti-racism demonstrators gathered in smaller numbers in the capital. Monuments around the world have become flashpoints in demonstrations against racism and police violence after the May 25 death of George Floyd, a black man who died in Minneapolis after a white police officer pressed a knee to his neck.

In Britain, the protests have triggered a national debate about the legacy of empire and its role in the slave trade. A statue of slave trader Edward Colston was hauled from its plinth by protesters in the city of Bristol on Sunday and dumped in the harbor.

In London, Churchill’s statue was daubed with the words "was a racist.” Prime Minister Boris Johnson tweeted Friday that while Churchill "sometimes expressed opinions that were and are unacceptable to us today,” he was a hero and "we cannot now try to edit or censor our past.”

Churchill, whose first term spanned 1940-45, has long been revered for his leadership during World War II. Churchill espoused various racist opinions and is largely held as being behind the Bengal Famine, which killed 2-3 million of Britain's Indian subjects, among other controversies.