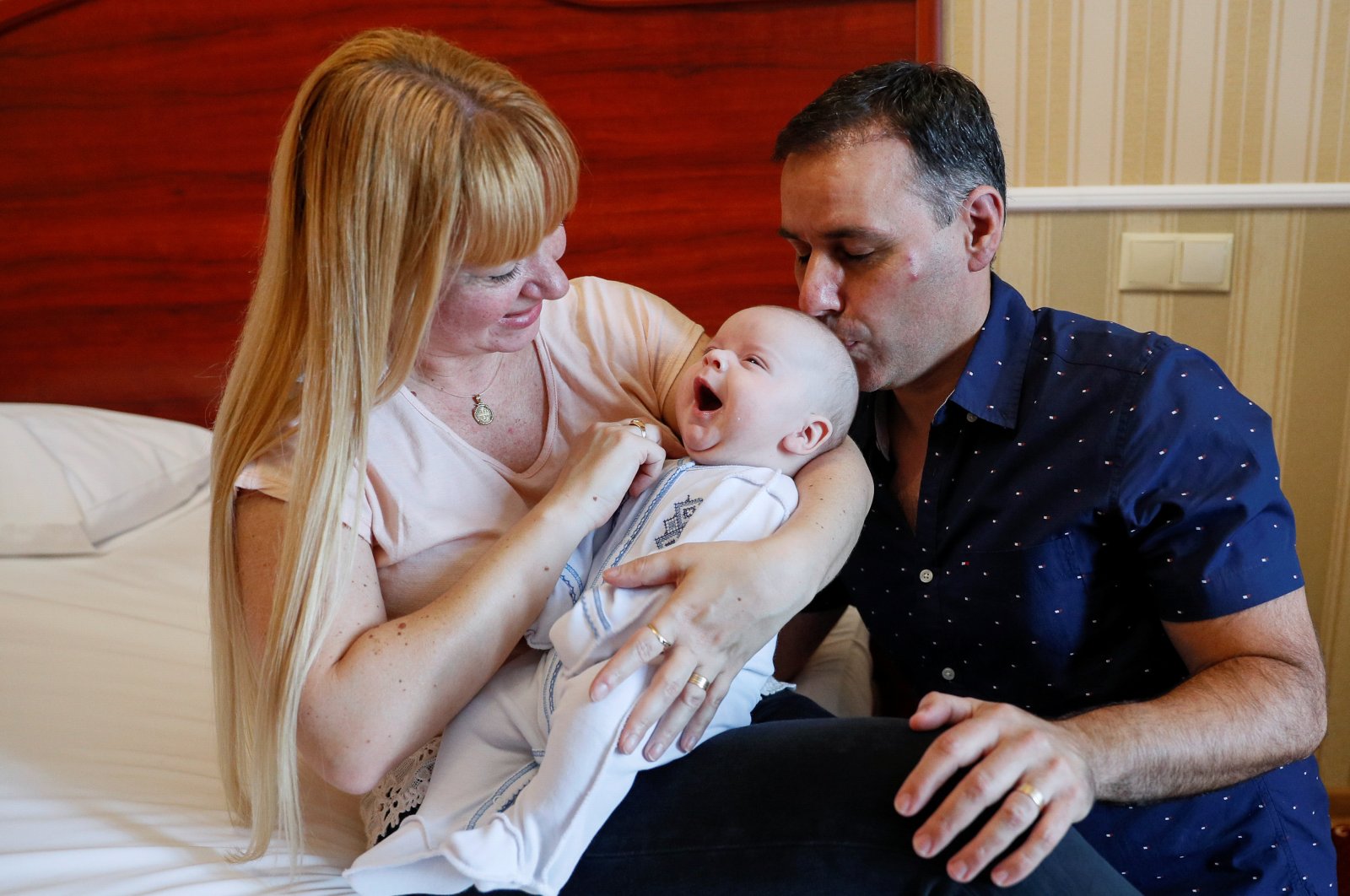 Jose Perez and Flavia Lavorino from Buenos Aires react during their first meeting with their son Manuel, who was born to a surrogate mother in a Ukrainian BioTexCom clinic in Kyiv, Ukraine, June 10, 2020. (Reuters Photo)
by Agencies Jun 11, 2020 11:05 am
RECOMMENDED

Dozens of foreign parents were unable to see their babies after they were born to surrogate mothers in Ukraine when coronavirus-related travel restrictions prevented them from entering the country.

So far, 119 families have applied for entry permits to the country to pick up 125 babies, parliamentary Human Rights Commissioner Lyudmila Denisova said in Kyiv.

"Eighty-eight families have already received such special permits, and 31 are already in Ukraine," she said.

On Wednesday, Jose Perez and Flavia Lavorino, a couple from Buenos Aires, met their baby son Manu for the first time, 71 days after he was born to a surrogate mother 8,000 miles (12,875 kilometers) away in Ukraine.

Lockdowns and closed borders imposed by governments around the world to contain the coronavirus pandemic had prevented the parents from traveling to Kyiv to pick him up until now.

Before Wednesday, Perez and Lavorino had only seen Manu, short for Manuel, in videos and photographs as they waited for special government permission to travel.

Now Lavorino can cradle Manu in her arms. As Perez kisses his head, the baby gives a little yawn.

Taking two flights with a layover in Madrid, the couple brought clothes, sneakers, blankets and a soccer T-shirt from Argentine Club Atlético Independiente with them. Lavorino worried the tiny socks for Manu would no longer fit.

"Everything was a struggle ... I don't have many words to describe just what I feel inside, there is so much emotion," said Lavorino.

Perez, a 47-year-old doctor, and Lavorino, a 41-year-old social worker, had been trying to have a child for years before turning to surrogacy.

"Every year is hard, but each year you also have the pain of the previous one," Perez said. "It costs you more to keep your hopes up. You are worn out physically and mentally, so the last years were even worse than the first ones," Lavorino said.

Since mid-March, nonresident foreigners have been banned from entering the country due to coronavirus restrictions. Regular international flights have stopped and are set to resume on June 15.

The infants were stranded in Ukraine after the country closed its borders to prevent virus infections. The newborns attracted wide attention after Biotexcom, the country’s largest surrogacy operation, posted a video showing dozens of babies in bassinets arrayed in tight rows in two large rooms of the hotel where the clinic puts up clients.

Ukraine has a thriving surrogacy birth industry and is one of the few countries that allows foreigners to participate. About 50 clinics that offer surrogate birth arrangements operate in the country, where economic struggles drive many Ukrainian women to become surrogate mothers.